Please ensure Javascript is enabled for purposes of website accessibility
Log In Help Join The Motley Fool
Free Article Join Over 1 Million Premium Members And Get More In-Depth Stock Guidance and Research
By Tyler Crowe - Jan 16, 2016 at 7:20AM

Or, a tale of two pizza joints

Have you ever sat on the beach and watched the waves? If you have, you've probably noticed that they hit the shore at a pretty constant frequency. However, the size of those waves all seem to be different and will change the shape of the beach. This is very similar to how commodity markets behave. It is a cyclical market that has ups and downs on a pretty regular basis, but the root cause of each cycle is different and will have varying impacts on the market that permanently change it.

Right now, the oil market is experiencing one of those big wave downturns. More than $200 billion in oil and gas investments evaporated in 2015. With oil prices remaining low and many companies simply out of cash, chances are that number will grow.

Like those waves on the beach, though, the lack of investment will come back full circle someday. The recent changes to the market have changed the oil and gas landscape, and the way that money is spent when it returns could be drastically different than before this recent cycle.

The Changing Dynamic
By now, most investors have seen the impact that shale oil and gas production have had on financial markets and the broader oil industry. The ability to unlock oil trapped in tight rock formations has rejuvenated American oil production in ways that so many thought were impossible only a decade ago. In less than 5 years the US has regained back oil production rates that were in some form of decline for more than 40 years. 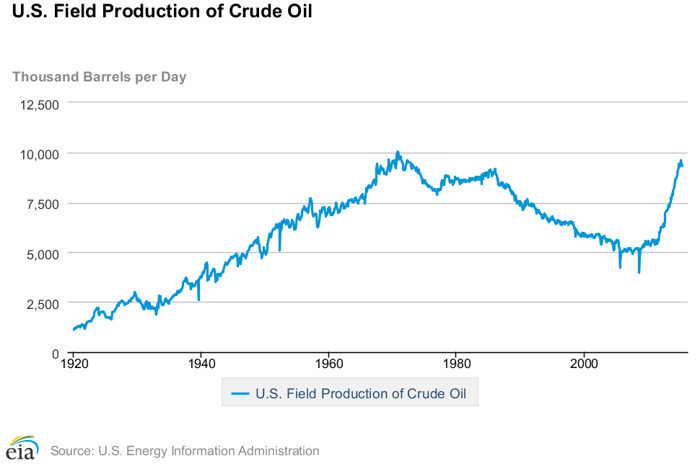 This technological and economic revolution has already had widespread impacts ranging from economic growth and global trade to geopolitical maneuvers that would have been considered impossible. However, one of the commonly held beliefs was that shale would be a marginal cost player in the oil market and that it would be one of the first sources of oil to feel strain when prices started to drop.

This chart from Chevron shows what was considered the breakeven costs for various types of oil less than a year ago.Back then, an optimistic break even price for a barrel of tight oil in the US was considered more than $70 per barrel and would be less economic as the average deepwater reservoir. 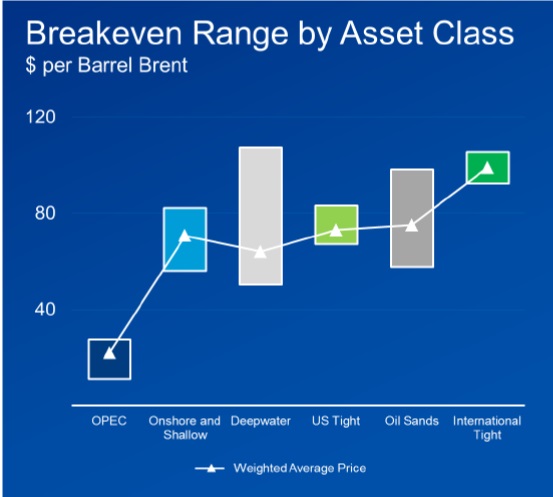 As oil prices have declined over the past year, though, we have also watched shale production achieve a new milestone that may be just as impressive as its inception: The ability to drastically reduce costs. In just a couple of years, the average break even price across some of America's most prolific shale basins have declined 33-50% thanks to a combination of better technology, better understanding of shale, and better practices. 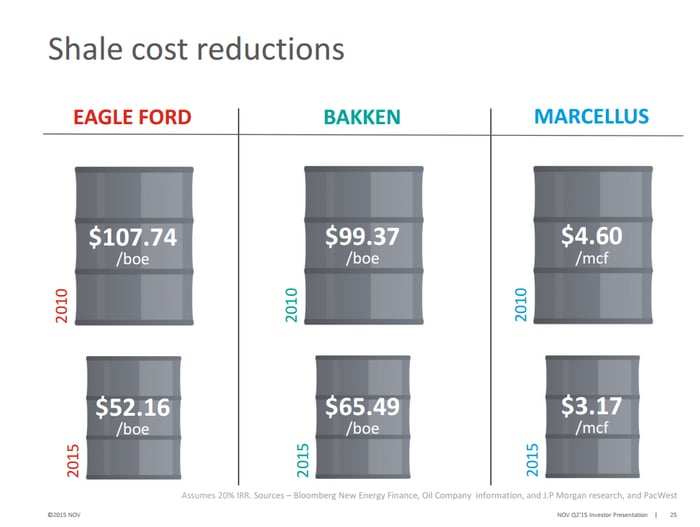 In fact, some of the best acreage in these regions are generating even better returns. A recent survey by Bloomberg Intelligence shows that some of the best wells in the Bakken can break even at $30 per barrel. Those are prices that only the oil-rich OPEC nations have been able to produce at for years.

There is another element that makes shale oil production so much more confounding to the broader market: The fast turnaround time that it takes to go from a board room decision to a producing well. Today in the Eagle Ford shale formation, a potential drilling site can go from an undisturbed field to having a producing well up and running in less than a month. Compare this to the years that it takes to explore, appraise, develop, and construct a deepwater well.

This shorter cycle of development means that shale oil can be much more responsive to oil prices than what we have come to expect from the oil and gas industry. Traditionally, producers would need to make rough assumptions about oil prices 5-10 years in advance to accommodate for the development process. For many shale producers, the decision to go out and drill a well can be as simple as looking at oil prices in the morning paper.

An oil source that has both a low break even price and extremely short development cycles is something the oil market is not completely used to, and the disruption that shale introduced to the market just a couple years ago could just be the tip of the iceberg.

The potential impact, as described by pizza
The aspect that is going to be so intriguing to watch over the coming years is going to be how companies allocate capital among the various oil producing options and how it impacts the all of the companies associated with those different types of oil sources.

Think of it this way. You have two pizza joints from which you like to get delivery. One of them is further across town and takes over an hour to get arrive and sometimes is cold by the time it gets there, but it's less expensive and pretty tasty. The other is right around the street and can have a hot, fresh pie at your door in 15 minutes, but for years it has been a much more expensive option. Suddenly, that one around the corner finds ways to make pizza for much less and it's now cheaper than that other joint across town!

How much are you going to order from the across town place and risk it being cold when you can have a hot, less expensive pizza in your belly well before the other one even gets to the door?

Can that pizza joint across town lower its prices enough to get your business back? How will those price cuts impact the deals it has with its cheese and sauce suppliers?

As shale pizza, er, oil costs continue to decline and move ahead of other oil production sources on the cost curve, it could have similar impact on how oil and gas producers decide to spend on production growth. Rather than make multi-billion dollar investments over years on a deepwater project that could come online in an unfavorable price environment, producers could allocate more of their capital to shale and get results much faster and be more responsive to oil prices.

The unknown unknown
This new variable in the oil and gas equation raises a lot of questions that have economical, political, and social implications. But at the root of all these questions is this one:

How does a cheap source of oil that can quickly respond to prices impact supply & demand dynamics of an industry that isn't used to it, and what will it mean for oil prices over the long term?

The way this answer plays out could go in a lot of different ways. Big name producers like the integrated oil and gas companies could shift their thinking away from big-ticket development projects in favor of being slightly more flexible shale producers. Also, if a bevy of disciplined US drilers were able to quickly ramp up production at a price level below the breakeven for other sources such as oil sands or ultra deepwater, then it could keep several prospective offshore or oil sand projects out of reach in terms of economics for a very long time.

The canary in the coal mine
Some segments of the oil and gas industry will either ride this wave of change or bear the brunt of it based on how they have previously positioned themselves in the oil and gas industry. The testing ground as to how much this could impact the industry will likely be the big name oil producers. They are the ones that have assets across all the various forms of production and the ability to invest in all of them.

Over the next two years or so, many of the integrated majors will be wrapping up their 5 year development plans, and pretty soon we should start to see new development plans that will show what these companies all plan to do for the next half decade. It won't be surprising to see these companies possibly decide to spend less than they did over this past development cycle, but one thing that is definitely worth watching is where those development dollars go. Will companies like ExxonMobil and Chevron look to generate a larger portion of their portfolio from shale? Or will they stay the course and continue to plow billions into long tail development projects deep offshore?

What a Fool Believes
The oil and gas industry is a cyclical one, and eventually the lack of investment in developing new sources of oil will catch up to the industry. With it will come higher prices, maybe not the $100 per barrel range we became so used to, but certainly higher than what we see today.

The biggest question for investors looking at the future of the industry isn't whether the market will turn -- it will -- or even when it will turn. Rather, the biggest question that we don't have an answer for is two which sources of oil and gas will all of those capital expenditures go to?  If there is anything that you should watch to determine the success or failure or oil and gas investments, it's watching those companies with the big budgets and any indications of how they plan to spend money through 2016 and beyond.

Tyler Crowe owns shares of ExxonMobil and National Oilwell Varco. You can follow him at Fool.com or on Twitter @TylerCroweFool.