Please ensure Javascript is enabled for purposes of website accessibility
Log In Help Join The Motley Fool
Free Article Join Over 1 Million Premium Members And Get More In-Depth Stock Guidance and Research
By Leo Sun - Jan 16, 2016 at 10:12AM

Many investors consider networking giant Cisco (CSCO 6.96%) to be a dull, slow-growth tech stock that pays a decent dividend. The stock currently yields 3.4%, which is considerably higher than the S&P 500's 2.3%. But looking ahead, can investors count on Cisco to raise its dividend in 2016 and beyond?

How Cisco stacks up against its peers
Cisco's closest direct competitor, Juniper Networks (JNPR 2.88%), only has a dividend yield of 1.5%. Over the past 12 months, Cisco paid out 36% of its free cash flow as dividends, while Juniper only paid out 19%.

That might seem like Cisco is more "generous," but it also means that Juniper has more room to grow its dividend. Yet over the past five years, Cisco's trailing 12-month free cash flow has risen 26%, outpacing Juniper's choppier 12% growth. 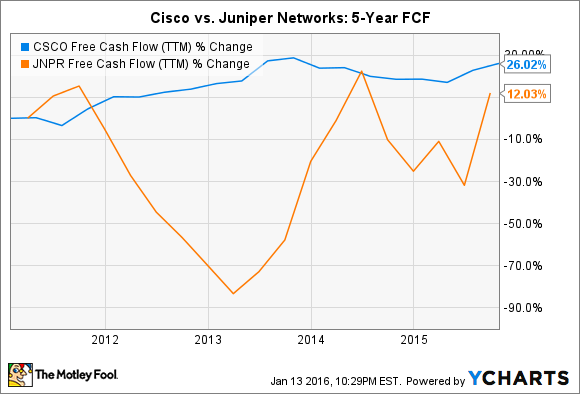 Last quarter, Cisco returned $2.3 billion (91% of its free cash flow) to shareholders by spending $1.2 billion on share buybacks and $1.1 billion on dividends. CFO Kelly Kramer noted that was "more than consistent" with its commitment to "returning a minimum of 50% of our free cash flow annually."

Bottom line headwinds
For Cisco to continue raising dividends, its bottom-line growth needs to stay on track. Analysts expect Cisco to grow its annual earnings per share at just 9.4% over the next five years, which is lower than the industry average growth rate of 15.7%. If Cisco achieves 9.4% earnings growth this year and retains an EPS-based payout ratio of 40%, investors can expect the company to raise its quarterly dividend 9.5% to $0.23 for 2016.

Cisco is currently pivoting its business from low-margin networking hardware toward high-margin software and services. The bulls believe that Cisco can bundle together software services with its networking hardware to expand into higher growth markets like cybersecurity. The stock's 11% decline over the past 12 months has also boosted its yield to an all-time high, indicating that it might be an ideal time to buy Cisco as an income investment. The stock also trades at just 13 times trailing earnings, a considerable discount to the industry average P/E of 42 for the networking and communication devices industry. 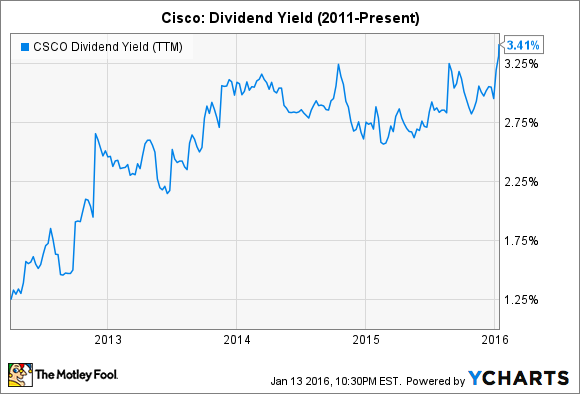 Meanwhile, stiff competition from Chinese hardware manufacturers like Huawei and ZTE could force Cisco to lower prices to stay competitive. Moreover, Cisco expects a strong dollar to take a big bite out of its overseas earnings for the foreseeable future.

Despite these challenges, Cisco's gross margins remain comfortably above 60%, indicating that these headwinds won't dent its dividend growth anytime soon.

Leo Sun has no position in any stocks mentioned. The Motley Fool recommends Cisco Systems. Try any of our Foolish newsletter services free for 30 days. We Fools may not all hold the same opinions, but we all believe that considering a diverse range of insights makes us better investors. The Motley Fool has a disclosure policy.