Please ensure Javascript is enabled for purposes of website accessibility
Log In Help Join The Motley Fool
Free Article Join Over 1 Million Premium Members And Get More In-Depth Stock Guidance and Research
By Dan Caplinger - Jan 16, 2016 at 9:11AM

The airline has come a long way since coming out of bankruptcy, but can it keep on returning more capital to its investors?

Less than a decade ago, Delta Air Lines (DAL -1.16%) emerged from bankruptcy, and many saw the approaching financial crisis as potentially dealing a death blow to many of the weaker players in the airline industry. Yet even though airlines like Delta suffered major financial stress during late 2008 and early 2009, moves that Delta and others made to impose new fees to create plentiful sources of revenue led to sustained profitability. Since then, rivals United Continental (UAL -1.16%) and American Airlines (AAL -0.90%) have followed Delta's lead by doing major mergers, and that has helped tighten capacity and give fare increases a better chance of holding. Delta now pays a dividend, and it has even made efforts to increase it regularly. Let's look more closely at Delta Air Lines to see how likely it is that investors will see a dividend increase this year.

The rarity of dividends among airlines
Delta's track record for paying dividends doesn't look very impressive, but you have to remember just how far the company has come in a short time. Having emerged from bankruptcy in 2007, Delta has gone through a major transformation because of its merger with Northwest. Strategic moves to modernize its fleet have required substantial capital expenditures. Yet the company nevertheless reinstated a $0.06 per share dividend in mid-2013, and in just two years' time, Delta has more than doubled that payout.

Delta's dividend yield of just under 1.2% also won't knock income investors' socks off. Yet it's hard to find an airline that can match it. United Continental doesn't pay a dividend at all, and American Airlines just reinstated a $0.10 per share quarterly dividend in 2014, working out to a 1% yield. 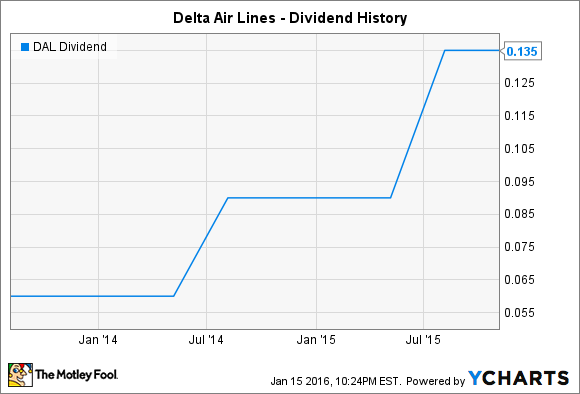 Some have been hopeful that Delta will be able to share some of its savings from falling fuel costs with its shareholders by raising dividends in the future. Delta has had to deal with a substantial hit from the fuel-hedging programs it had in place, but even with those charges, the airline has seen its cash flow improve since the plunge in fuel prices.

Yet the key thing to understand about Delta is that it has many competing ways that it wants to spend its cash. The company announced a new $5 billion stock buyback program last May, and it has been moving aggressively to implement that plan and make share repurchases. Delta also has an underfunded pension to which it expects to make regular contributions to catch up with its obligations, and it expects to spend roughly $2.5 billion to $3 billion annually to replace aircraft and implement other major capital-spending programs.

Can Delta's dividends fly higher?
There's no question that if Delta wanted to boost its dividend, it could. The company only pays out about 12% of its earnings to shareholders through dividends. Yet given how much experience airline investors have with the cyclical booms and busts in the industry, shareholders haven't clamored for the long-term commitment that a big dividend increase implies. Instead, they've seemed quite content with buybacks that have helped push share prices sharply higher in recent years.

Delta will probably continue its streak of raising its dividend annually in 2016, with the timing likely to come in the second half of the year to be consistent with its recent past practice. Nevertheless, investors shouldn't expect Delta's dividend yield to increase dramatically, and the airline will likely continue to make other uses of cash more of a priority item going forward.

Dan Caplinger has no position in any stocks mentioned. The Motley Fool has the following options: long January 2017 $35 calls on American Airlines Group. Try any of our Foolish newsletter services free for 30 days. We Fools may not all hold the same opinions, but we all believe that considering a diverse range of insights makes us better investors. The Motley Fool has a disclosure policy.