The action-camera maker's Q4 guidance update was ugly -- but growth will return once GoPro updates its high-end products.

In the past six months, action-camera specialist GoPro (GPRO -1.31%) has gone from tech industry darling to one of the most hated stocks on Wall Street. GoPro stock crashed to a new all-time low last week -- down more than 85% from its peak in late 2014 -- following an ugly guidance update. 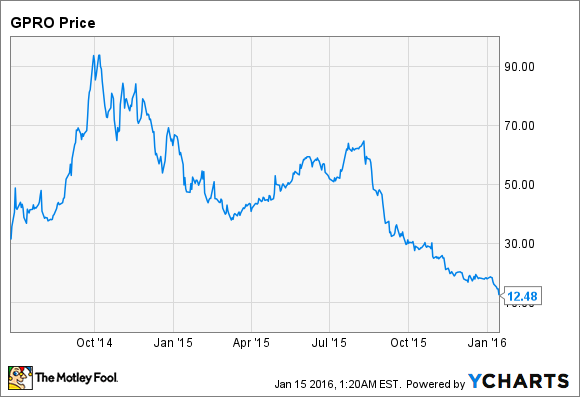 GoPro now has investors bracing for a greater than 30% revenue decline for the final quarter of 2015. However, this terrible quarterly performance isn't representative of GoPro's potential, and the company is poised for a return to strong growth in the second half of 2016.

Revenue plummets
In October, GoPro's management projected that Q4 revenue would be between $500 million and $550 million, down substantially from the record quarterly revenue of $634 million achieved a year earlier.

This drove a sharp sell-off in GoPro stock. However, this week, the company revealed that sell-through trends were even worse than expected, particularly in the first half of the quarter. As a result, revenue will be around $435 million. That sent the stock plunging even further.

GoPro's Q4 results are clearly terrible by any measure, and they likely foreshadow more big revenue and earnings declines in the first half of 2016. Nevertheless, investors are overreacting to this news. There is a very good reason why GoPro's sales plunged last quarter -- and why sales will bounce back later this year.

It's all about products
In late September of 2014, GoPro launched two new high-end action cameras: the HERO4 Black and HERO4 Silver. Customers loved these new products, driving 75% revenue growth during the fourth quarter of 2014.

The momentum continued during the first three quarters of 2015, with revenue growth remaining in mid-double digit territory. Earnings per share also leaped higher, reaching approximately $1.20 on a GAAP basis for the four-quarter period following the HERO4 launch. 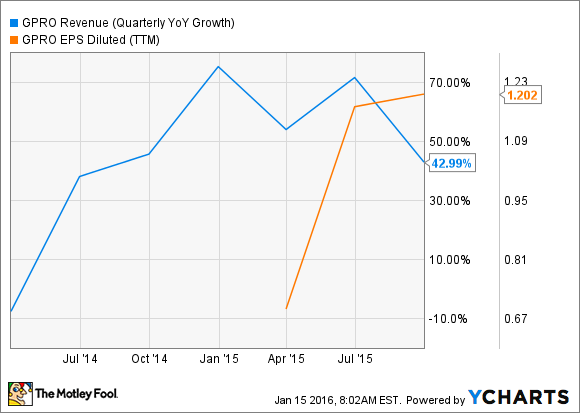 To continue its growth, during 2015 GoPro focused on expanding distribution of its products, especially outside the U.S. It also released two new mid-priced action cameras. However, its biggest bet on growth was the HERO4 Session: a simple, ultra-compact camera the size of an ice cube.

What GoPro didn't do was introduce a "HERO5" line of cameras to supersede the popular HERO4 Silver and HERO4 Black. Moreover, the Session flopped. Few people were willing to pay $399 -- the same price as a HERO4 Silver -- for a smaller, simpler version of a GoPro. Subsequent price cuts to $299 and then to $199 forced GoPro to take big writedowns, but they didn't improve sales all that much.

New products are coming
Thus, the biggest cause of GoPro's current predicament is a lack of new high-end products. With no successor to the HERO4 line available, the company lost out on potential upgrade sales to loyal customers last quarter. The lack of a new high-end product probably also made it harder to win new customers, given the high price tags of the HERO4 Black and HERO4 Silver.

But new products will come eventually. Management has probably learned its lesson, and will speed the development of future generations of high-end cameras, while avoiding a repeat of the HERO4 Session flop. The next new line of cameras will arrive sometime in 2016, though it's not yet clear when.

GoPro is also targeting adjacent markets for growth. In the first half of 2016, it is scheduled to release a six-camera spherical rig for capturing virtual reality content, as well as a consumer drone that CEO Nick Woodman sees as the "ultimate GoPro accessory."

As long as GoPro continues to feature stale products, it will keep reporting big sales and earnings declines. However, by the second half of the year, it is likely to have a completely refreshed product portfolio -- particularly at the high end of the market.

This should drive a strong wave of replacement sales from GoPro enthusiasts, while bringing in new customers, too. Accessories like the drone and virtual reality rig could also see strong adoption by hardcore GoPro fans.

The result will be a sudden return to strong revenue and earnings growth. GoPro stock already trades for just 10 times its GAAP earnings for the 12 month period that ended in September. That's a huge bargain for a company that likely has a lot of growth still to come.

Adam Levine-Weinberg is long January 2018 $30 calls on GoPro. The Motley Fool owns shares of and recommends GoPro. Try any of our Foolish newsletter services free for 30 days. We Fools may not all hold the same opinions, but we all believe that considering a diverse range of insights makes us better investors. The Motley Fool has a disclosure policy.