Miners are cutting costs like crazy, and one place they're finding savings is by using secondhand goods.

Falling commodity prices have crushed the mining industry. Capital budgets have been cut to the bone; giant BHP Billiton (BHP 0.74%), for example, cut its capital budget by 25% in fiscal 2015 alone, with plans for further cuts over the next two years. And one of the key ways miners are saving is just killing equipment makers such as Caterpillar (CAT 1.46%): going used.

Extending things
Caterpillar CEO Douglas Oberhelman noted during his company's third-quarter conference call that "we haven't seen [this] dramatic of an extension in the life cycles ever." That's industry-speak, but what he's saying is that miners aren't buying new equipment; they're using what they have for longer than ever before in an attempt to save money. This, of course, helps explain why 2015 will probably mark the fourth consecutive year in which Cat's revenues have declined. 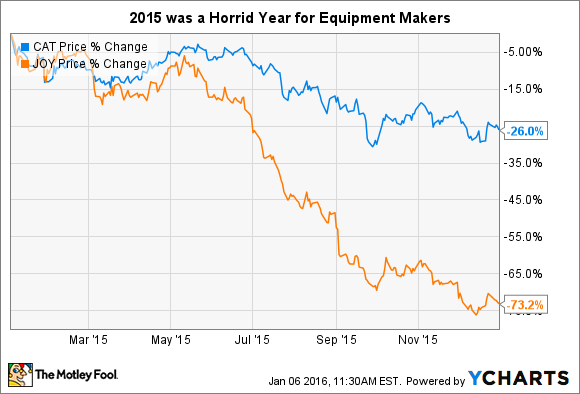 But there's more to Oberhelman's statement then meets the eye. For example, at a Credit Suisse conference in late 2015, Rich Moore, Cat's head of investor relations, explained that his company believes "that mining companies are cannibalizing the parked fleet to some degree." Essentially, with mines being shut down, there's a plethora of used gear just sitting around waiting to be stripped for parts to keep the machines that are still working in the mines up and running.

Just how bad is it? Joseph Craft, CEO of coal miner Alliance Resource Partners LP (ARLP -2.15%), summed it up nicely when he explained in his partnership's third-quarter conference call, "There is plenty of surplus equipment in the market." And that makes complete sense, particularly in coal, where once giant players have been punished by low natural gas prices and environmental concerns. Alpha Natural Resources careened into bankruptcy last year, and Arch Coal is teetering on the edge. Along the way, this pair, and others, have been closing mines. That frees up machinery to use elsewhere or for parts.

In fact, even Alliance, which has been upping production at its core Illinois Basin operations for years while competitors have been pulling in their reins, recently noted that it would have to start looking at its own "supply response." In other words, the miner is going to stop mining so much. Just a few days after that announcement, it told workers at several mines that it would be trimming production and cutting jobs. And while only one of the affected mines was actually shuttered, less mining at the other mines means less wear and tear on the machines there -- and, of course, even less reason to buy new.

When does it all end?
Right now, the pain is pretty bad for Caterpillar and competitor Joy Global (JOY). But mining equipment has to be maintained or it breaks down. And, eventually, the machines just have to be replaced. So while employing used gear and stripping idled equipment for parts can lengthen the time before larger costs, such as buying new, hit a miner, the inevitable can only be pushed out for so long.

And here's the important thing for investors looking for a machinery turnaround. Cat's Moore explained that "the first thing that would likely happen before we would get an [original equipment] replacement cycles is some of those cannibalized machines would get rebuilt and repaired to go back into production."

So listen closely to the miners as we move into the new year to see if they start talking more about rebuilding their idle equipment to replace active mining equipment that's starting to wear out. And pay attention to Cat and Joy for similar discussions, since they'll probably see an uptick in their service and parts businesses when this trend emerges. When you hear these types of conversations, you'll know that miners are about to see costs go higher and the folks that sell equipment are about to see revenues move in an upward direction for a change.