Please ensure Javascript is enabled for purposes of website accessibility
Log In Help Join The Motley Fool
Free Article Join Over 1 Million Premium Members And Get More In-Depth Stock Guidance and Research
By James Sullivan – Jan 17, 2016 at 7:11AM

Starbucks is a giant company, but nevertheless tailors its products with local preferences in mind. 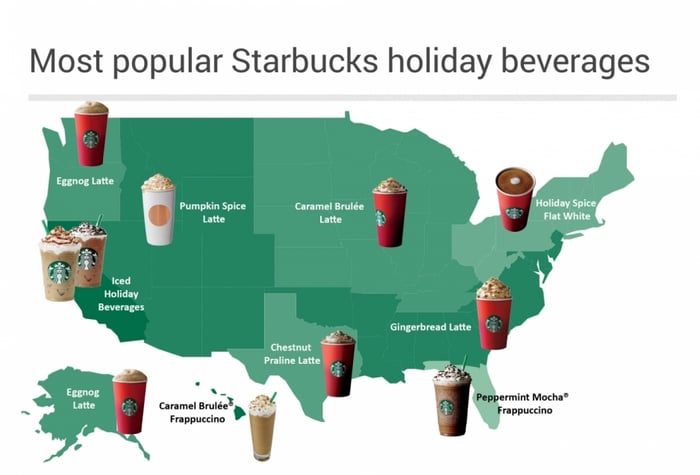 Starbucks (SBUX 0.76%) recently released its top holiday drinks for nine different U.S. states and regions. While the company is thought of as a monolith this chart shows its ability to cater to regional tastes. Creating new offerings and expanding to new geographic areas are two of the pillars of Starbucks' success.

Starbucks the monolith
Starbucks initially gained success by consolidating a fragmented coffee shop market and bringing a uniform experience to customers. It's reassuring to know that whether you are in your hometown, Hawaii, or Hamburg, you can be assured a cup of coffee, tea, or other beverage that matches your expectations. Consistency is powerful but it can also bring detractors who claim that homogeneity crushes local preferences.

Starbucks has done a good job of matching the feel of local coffee shops by experimenting with new offerings and making its cafes into a "third place" for people to spend time when not at home or the office. A Peppermint Mocha Frappuccino was the most popular holiday drink under the hot Florida sun while an Eggnog Latte was the preference for denizens of the Pacific Northwest and Alaska. I have no idea why people in the Midwest preferred for a different flavor of Latte than the South, but Starbucks took advantage and sold people what they wanted.

Some of these holiday drinks may fall by the wayside while others will become drinks that customers anticipate as the calendar turns to November every year. These drinks are part of what allows Starbucks, with over 23,000 stores and a greater than $85 billion market cap, to remain one of the fastest growing businesses around.

Same store sales growth
As of last year's fourth quarter, Starbucks had delivered global same store sales growth of more than 5% for 23 consecutive quarters. For FY 2015 the numbers are even more impressive, as the company posted an 8% global increase. These types of comps are difficult to sustain, but Starbucks gets it done by blending a number of tools at its disposal.

Same store sales can be improved by generating more traffic and/or increasing the size of a typical transaction. The higher check average is a result of more purchases per customer, higher prices for existing products, and new products with higher prices. If a Pumpkin Spice Latte gets a customer in the door, it increases traffic. If it replaces a customer's regular order of black coffee it leads to a higher check average.

New stores in new places
Overall revenue growth for the company includes same store sales, new stores, and sales of its products through other channels such as grocery stores. Areas that are relatively underserved such as China generate most revenue growth from new stores and increased traffic. In FY 2015 China/Asia Pacific comp sales increased 9%, of which 8% was from increased traffic. New stores act as advertising for the brand and China, with less than 2000 total stores, is a great place for Starbucks to acquire new customers and increase store traffic.

In North America, comp sales increased 7%, though only 3% came from higher traffic. The market in North America is more mature, with more than 12,000 stores in the U.S. alone. Acquiring new customers is thus more difficult. Increasing comps with offerings like new speciality drinks, better food options, and alcohol is a more effective option. Favorite specialty holiday drinks are part of this equation and offer a portal into how the company is thinking.

There is a lot of growth ahead in places like India and China. Howard Schultz believes that China will become the company's biggest market. When growth from new stores overseas dries up Starbucks will need to increase revenue by catering to local tastes and serving premium beverages. Hopefully in January 2026 we'll see maps of China and India outlining different regions' favorite beverage from the year before.

Starbucks has years and perhaps decades of global growth ahead of it. It has the resources of a large centralized company and the ability to innovate, sell locally, and grow comps in multiple ways. This is a powerful combination that makes it a cornerstone of my portfolio. If you don't own shares I'd recommend taking a deeper look at this tremendous business.