Few Americans know it, but we have a National Taxpayer Advocate, Nina Olson, working for us. Olson leads the Taxpayer Advocate Service and reports regularly to Congress on problems she and her office have observed related to the IRS. She makes recommendations, too.

Those eagerly awaiting her latest annual report to Congress can breathe a big sigh of relief -- it's finally here! On Jan. 6, Olson released her hefty 2015 report that draws particular attention to 20 pressing problems -- some of which point to more headaches for many of us as we prepare and file our tax returns.

Reduced service
Customer service from the IRS has been getting worse in recent years, and very understandably so. Congress has repeatedly cut the budget of this critical agency that collects money due to our government to keep it running. Since 2010, the IRS budget has been slashed by an inflation-adjusted 19%. That has led to a smaller employee base, and significantly less money to train staffers -- clearly not a prescription for getting a lot of taxpayer questions answered and problems resolved.

Well, it looks like the situation will be getting worse, from a taxpayer's perspective. As it tries to operate with a smaller budget, the IRS is developing a "Future State" plan that appears to intend to reduce the agency's interaction with taxpayers via telephone and in person. (The report notes: "The IRS historically has maintained a robust customer service telephone operation that, in every year since FY 2008, has received more than 100 million taxpayer telephone calls, as well as a network of nearly 400 walk-in sites that, in every year for over a decade, has provided face-to-face assistance to more than five million taxpayers.") To achieve the aim of reducing telephone and face-to-face interactions, the IRS is developing online taxpayer accounts and will likely be steering taxpayers to seek help (presumably automated help) through them.

While the IRS may believe that this will reduce demand for help over the phone and in person, Olson warns that that may not happen: "Technology improvements often do not reduce demand for personal service to the extent expected. For example, the IRS over the past decade has increased the individual tax return e-filing rate from 54% to 85%, enhanced the Where's My Refund? tool, and added substantial content to the IRS.gov website, yet the number of taxpayer calls to its customer service lines has increased by 59%."

But wait -- there's more
Here are a few more of the 20 problems Olson cited: 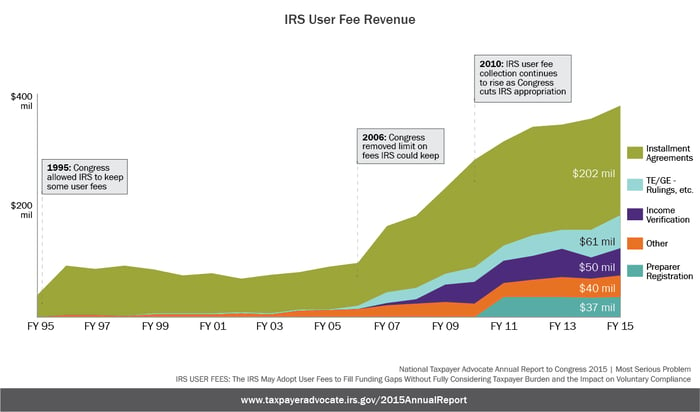 Fees paid to the IRS have been rising. Source: Taxpayer Advocate Service.

One good solution
Olson offers suggestions and recommendations to address these issues, such as having the IRS invite discussion and commentary about its Future State plan and track false positives when screening for fraudulent returns, but there's one big fix that could help many of the problems she cites: Increase funding for the IRS.

Congress appears to be viewing every dollar cut from the IRS as a dollar saved, but check out this mind-blowing stat from Olson's office: "In FY 2013, the IRS collected $255 for each $1 it received in appropriated funds from the federal government."

Clearly, if America needs more money for infrastructure and law enforcement and education and a host of other vital societal services, it needs more money. The IRS is standing ready to collect money that's due -- it just needs funding to do its job, and to some degree, the more money allotted to it, the more it can collect -- while better serving taxpayers, as well.

If you don't like what's going on with the IRS and Congress' actions regarding it, consider contacting your representatives in Congress and letting them know.