Obamacare's individual mandate requires everyone to purchase health insurance. Here's what could happen if you don't.

Nearly six years ago President Barack Obama signed the Patient Protection and Affordable Care Act into law. Better known as Obamacare, this law sought to completely transform the way we shop for health insurance, as well as alter the way we receive care.

Obamacare: taking the bad with the good
Officially implemented on Jan. 1, 2014, Obamacare brought with it a number of changes, some of which appear to be working well on the surface, while others haven't been as well received by the public. 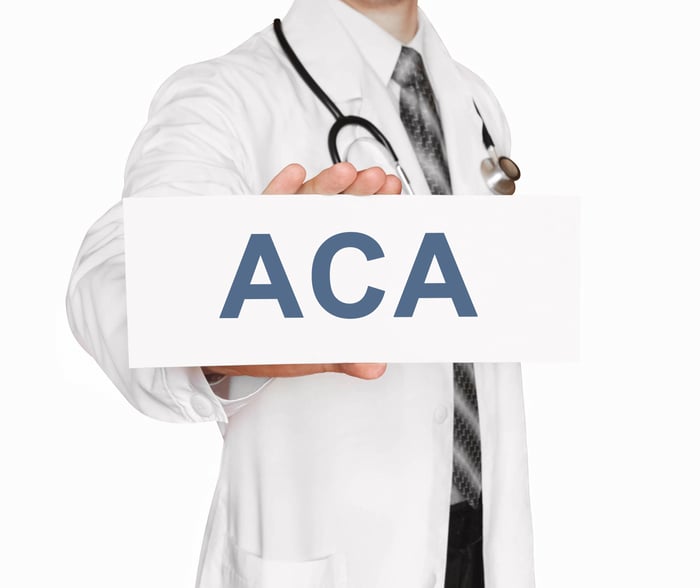 For example, you'll get little argument from the American consumer that preventing health benefit providers from rejecting patients based on pre-existing conditions is a good thing. Patients with chronic and terminal illnesses deserve care, and Obamacare is ensuring that all Americans, should they choose to enroll and pay their premiums, have access to health insurance.

Additionally, the creation of marketplace exchanges can be viewed as a positive since it allows consumers to make side-by-side comparisons of comparable plans, which previously would have been extremely difficult. By placing consumer choices in a transparent marketplace, Obamacare is also designed to encourage competition and keep premium price inflation from getting out of hand.

The simple answer is that you're in violation of the individual mandate and may be required to pay a penalty when filing your tax return. If, for example, you go through 2016 without health insurance, you'll report to the IRS by Tax Day in April 2017 that you didn't have health coverage during the prior year.

How much could your decision not to purchase health insurance cost you? Here's where things can get a little tricky.

On the surface, the costs of the shared responsibility payment, or SRP, are pretty clear. In 2014, the cost was the greater of $95 or 1% of an individual's modified adjusted gross income, or MAGI. Based on data from H&R Block, the actual average SRP paid by non-compliant uninsured persons in 2014 was $190.

However, in 2015 and 2016 the cost of the SRP jumped dramatically. In 2015 it rose to the greater of $325 or 2% of MAGI, and this year it rises to the greater of $695 or 2.5% of MAGI. Estimates from the Kaiser Family Foundation suggest this could equate to an average SRP of $661 in 2015 and $969 in 2016. Thus, the easy answer is you'll pay an average penalty approaching nearly $1,000 for not purchasing health insurance in 2016. Generally speaking, the more you earn, the higher your penalty will be, although the magnitude of your shared responsibility payment is capped at the full-year cost of the least-expensive bronze plan within your state.

Don't forget about the exemptions
But for some people who remain uninsured through 2016, an SRP won't be needed. Despite the individual mandate requiring everyone to buy health insurance, there are certain documented exceptions that allow an individual to bypass having to pay the penalty.

What are these exemptions? Income and affordability are the most common ones. If your household income was below the minimum threshold required to file a tax return, or the cost of paying for your health insurance premiums would have exceeded 8% of your household income, then you're exempted from paying the SRP.

Documented and recognized religious groups and Indian tribes are also exempted, as are Americans who are living abroad for at least 330 days during a 12-month period, and persons who are incarcerated.

What happens if you don't pay the SRP?
If you aren't exempted from the SRP, then you're required, per the IRS, to make your shared responsibility payment. But what if you don't?

Unlike failing to pay your federal income taxes, the IRS can't garnish your wages, seize your property, or put you in jail for failing to pay the SRP. What it can do is request that you pay your portion of the SRP or withhold what you owe in shared responsibility payments from your federal tax refund, including future refunds. Around 80% of taxpayers each year are due refunds, giving the IRS plenty of leeway to reduce your refund by the amount of your SRP.

What happens if you aren't owed a tax refund and still owe the SRP? In theory, the federal government could take you to court to collect. However, there are probably a lot of similar cases of consumers who are in violation of the individual mandate and owe the SRP but aren't due refunds. Taking each case individually to court would be time-consuming and costly, and thus in my opinion highly unlikely. However, upper-income earners who violate the individual mandate for multiple years and whose penalties grow over time could potentially become targets of the IRS in court.

One big advantage of buying health insurance
An even simpler way to avoid the SRP is simply to buy health insurance, whether through the Obamacare marketplace exchanges, via a private exchange, or directly from a health benefits provider. Aside from being protected in the event of an unexpected illness or ailment, premium costs are typically tax-deductible, whereas the shared responsibility payment is not. So even if you don't visit the doctor much during the course of the year (which is a good thing in my book), your taxable income will be lowered when you do file your federal income tax return.

Keep in mind that your last chance to enroll for coverage by Feb. 1, 2016 has come and gone as of Jan. 15, 2016, but you still have through Jan. 31, 2016 to enroll and be covered by March 1, 2016. Early enrollment data appears to be tracking well ahead of calendar year 2015, but these final two weeks will be critical in determining whether Obamacare enrollment takes a step forward or backward in 2016.