Those who follow Apple (NASDAQ:AAPL) know that year-in and year-out, the company delivers substantial boosts in performance and features in its custom-designed A-series processors. The performance enhancements that Apple has been able to deliver generation over generation have generally been quite exciting.

In this article, I'd like to go over one of the key reasons behind why Apple has been able to deliver such gigantic increases over the generations.

One well-known principle in the world of semiconductors, known as Moore's Law, is that every couple of years or so, chipmakers will move to next-generation manufacturing technologies. These technologies lead to a reduction in the amount of chip area required to implement a given product, usually on the order of a 50% decrease.

In recent years, however, as the fundamental building blocks of chips, known as transistors, have gotten smaller, finished wafer costs have gone up as the capital intensity per wafer has increased.

The net result, though, is that the area reduction is greater than the wafer cost reduction, allowing chipmakers to ultimately build better, more feature-rich chips for the same manufacturing cost.

Apple pushing things to the extreme in terms of die sizes
Perhaps the company that's loudest about and proudest of Moore's Law is Intel (NASDAQ:INTC). To highlight the power of moving to new manufacturing technologies, Intel pointed out that one of its 22-nanometer laptop processors packed in 960 million transistors in an area of 130 square millimeters. 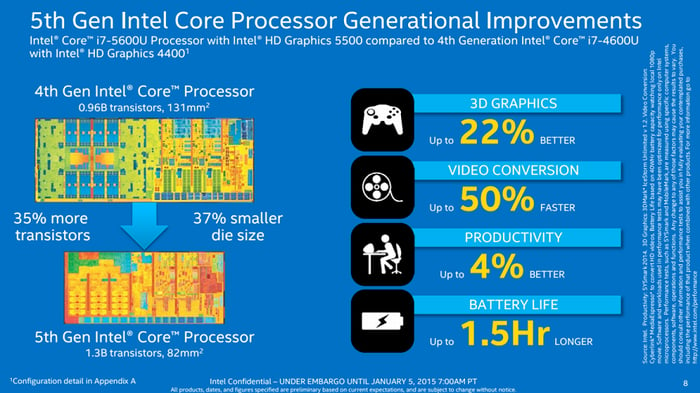 The successor to that chip, built on the company's newer 14-nanometer manufacturing technology, saw its transistor count balloon to 1.3 billion but saw a chip area reduction to just 82 square millimeters.

In this case, Intel made its chip both better and smaller. 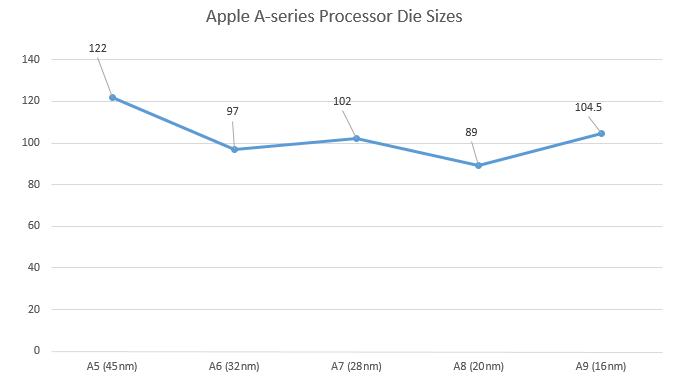 In other words, Apple is seemingly willing to incur slight chip cost increases in order to deliver substantially better performance. This makes sense given that, in the scheme of Apple's iPhone/iPad bill of materials, the chip cost isn't all that much, but the performance increases/additional features can deliver a lot of value to the customer.

Looking ahead to the A10 -- and beyond
The Apple A10 is expected to be manufactured on the same 16-nanometer process that (one variant of) the A9 was built on. Given that, according to Apple foundry partner Taiwan Semiconductor Manufacturing (NYSE:TSM), Apple has "added a lot of functionality" into its next-generation chip, which means that the A10 should be even larger than the A9.

I wouldn't be surprised to see the A10's die-size swell to around 120 square millimeters, putting the die size back at A5 levels.

Each of these technologies promises substantial density improvements over the preceding ones. If Apple holds A11/A12 die sizes fairly constant at around 100 square millimeters, then expect these chips to not only pack in a lot more features, but also a lot more performance.