With the first quarter of 2016 just getting started, Chipotle, SolarCity, and Gilead are capturing these Fools' interest.

With a slew of major companies set to report quarterly earnings in the coming weeks, there will be no shortage of news for investors to digest. But each quarter's results only tell a small piece of the story, and investors should always be looking forward. With that in mind, here are three stocks that our Foolish contributors are keeping an eye on during the first quarter.

Jason Hall (SolarCity): It's been a whirlwind six months for SolarCity (SCTY.DL) and its investors. After several years of breakneck growth, the company's management announced on its most recent earnings call that it was planning to take its foot off the gas pedal, and focus on more strategic growth. This was driven by expectations that the federal solar investment tax credit (ITC) was unlikely to be renewed -- at least at the same level -- and would expire in 2017.

The stock promptly tanked, even though SolarCity was still expecting to grow 40% or more in 2016.

Fast-forward a few weeks, and the ITC was extended in its current form until 2020, when it would decline over several years. SolarCity's stock shot up on that news, but then got smacked down again when Nevada regulators essentially killed the state's distributed residential solar business, ending "net metering," which allows solar users to gain credits with their local power utility during the day, banking production from their solar panels toward nighttime power consumption. SolarCity immediately ceased operations in the state following the announcement, cutting 550 jobs in Nevada.

At the same time, Arizona utilities are pushing hard to change net metering there, and this has created more unknowns in another major solar state, with a potential change there coming in June.

Add it all up, and these are interesting times for solar installers, of which SolarCity is by far the largest, and I'm anxious to hear from management. There remains huge opportunity, and the ITC extension is great for the industry, but uncertainty in two major solar states in Nevada and Arizona looms large, and I want to know how SolarCity management will deal with the changing landscape.

Tim Green (Chipotle): Fast-casual restaurant chain Chipotle Mexican Grill (CMG 1.17%) is currently going through one of the biggest challenges that any restaurant chain can face. An E. coli outbreak at 43 of the company's restaurants was reported late last year, and the source of the outbreak has yet to be determined. Meanwhile, a norovirus was confirmed to cause the sickness of 120 students who ate at a Chipotle store in Boston. Chipotle received a federal subpoena requesting documents related to a norovirus incident in California, and a class action lawsuit contends that Chipotle made misleading statements and had inadequate quality controls.

All of these developments have done a number on Chipotle's stock, which has been in free fall for the past few months. Chipotle expects its December comparable-store sales to plunge 30%, and the company warned about weak sales in 2016.

When Chipotle reports its fourth-quarter results on Feb. 2, investors can expect fairly awful numbers from the company. The conference call should give investors a sense of how long the company expects these troubles to continue, and management will likely get some tough questions from analysts. Investors who avoided buying shares of Chipotle in the past due to a lofty valuation may be able to go bargain hunting during the first quarter, but with customers feeling burned by Chipotle's failure to live up to its promise of serving "Food with Integrity," sales could continue to be weak for quarters, or years, to come.

George Budwell (Gilead): I'll be watching Gilead Sciences (GILD 1.84%) in the first quarter of 2016 because it's one of the central pillars of the entire biotech industry. Simply put, as Gilead goes, so does the rest of biotech.

The key issue is that Gilead is, in many ways, a "tone setter" for the industry, helping to shape investors' collective sentiment surrounding biotech. Unfortunately, the company's presentation this month at the annual J.P. Morgan Healthcare Conference failed to impress biotech investors, presumably because Gilead didn't provide a rosy annual outlook, or any guidance whatsoever for 2016.

Instead, Gilead took the time to update investors on its emerging clinical pipeline in relatively new areas for the biotech, such as inflammatory diseases and oncology. If the market's reaction is any guide, though, it doesn't seem to have much faith in Gilead's ability to compete in these highly competitive -- yet enormous -- drug markets. Specifically, the biotech's shares have now dropped by more than 4% since its presentation at J.P. Morgan, according to data from S&P Capital IQ. 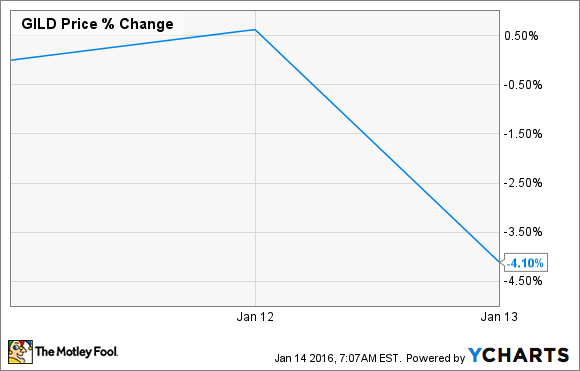 Looking ahead, the next catalyst for Gilead -- and perhaps biotech as a whole -- is the company's fourth-quarter earnings release that should hit the Street in the first week of February. While the fourth-quarter numbers are obviously going to be important, I'll mainly be interested in hearing the company's annual guidance that should be folded into this upcoming earnings release.

Traditionally, Gilead has chosen to provide highly conservative guidance that's easily topped during the course of the year. But that strategy may change in light of the market's overtly pessimistic view of the company right now. Stay tuned.

George Budwell has no position in any stocks mentioned. Jason Hall owns shares of Chipotle Mexican Grill and SolarCity. Timothy Green has no position in any stocks mentioned. The Motley Fool owns shares of and recommends Chipotle Mexican Grill, Gilead Sciences, and SolarCity. Try any of our Foolish newsletter services free for 30 days. We Fools may not all hold the same opinions, but we all believe that considering a diverse range of insights makes us better investors. The Motley Fool has a disclosure policy.