Please ensure Javascript is enabled for purposes of website accessibility
Log In Help Join The Motley Fool
Free Article Join Over 1 Million Premium Members And Get More In-Depth Stock Guidance and Research
By Brian Stoffel - Jan 18, 2016 at 5:25AM

There are lots of ways to think about this, and your approach makes a big difference.

When I lived in Washington, D.C., a night out for dinner and drinks for my wife and I could easily run us $50 or more. But today, living in rural Wisconsin, we can stay under $20 without much trouble. Of course, that may have something to do with the fact that it's hard for us to go beyond two beers without falling asleep at dinner -- but I digress.

The important thing is that there are real differences in the cost of goods depending on where you live. Such is the reality that many Americans face as they relocate throughout their lives. There are hundreds of variables that factor into this, and I won't get into them now. This makes it difficult to make apples-to-apples comparisons of earnings across all 50 states.

That being said, the Bureau of Labor Statistics released data in May 2014 showing the average (mean) yearly earnings for employees in all 50 states and the District of Colombia. The results are interesting, though perhaps not as instructive as you might think.

In full disclosure, I wrote a similar piece two month ago, but there are two important differences: This data set is more up to date and represents earnings per wage earner, instead of per household. This gives you a slightly more complete picture, as you can adjust these figures to the number of wage earners that may be in your household.

Here's what the survey found.

Obviously, D.C. is somewhat of an outlier, as it is a very dense population of high-earning individuals -- covering less than 70 square miles.

As I did in the previous piece, however, I think it's worth adjusting these numbers to fit how much each dollar is worth on a standardized basis. The data I'll use for this comes from The Tax Foundation's map below of how far $100 goes on a standard basis in each state. 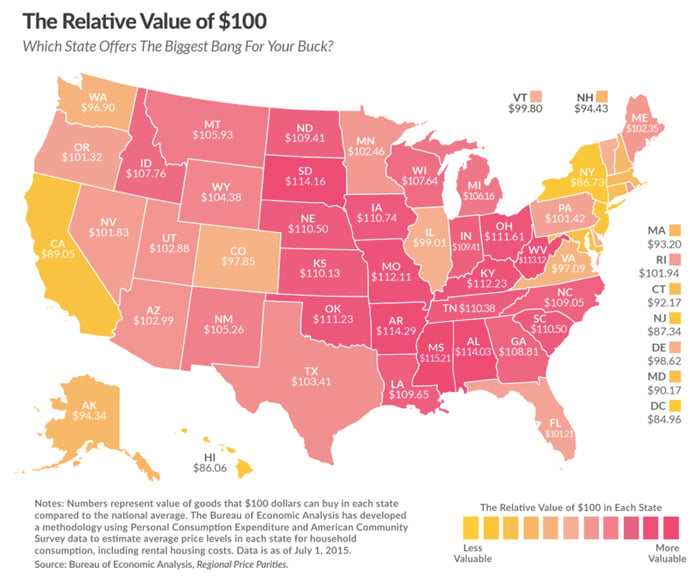 When the mean salary per employee is thus adjusted, the results change quite a bit -- have a look, noting that I kept the order the same as above but adjusted the mean earnings when accounting for how far $100 goes in each state. 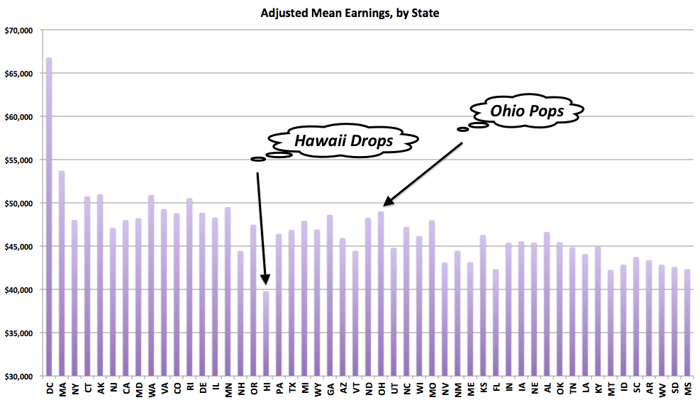 Source: Author's calculation from Bureau of Labor Statistics and The Tax Foundation's information.

This graph may be a little tough to read, so let's unpack it. Basically, those states closer to the Y axis have higher earnings and vice versa; they're listed according to their original rankings above, with the blue data points. The purple data points are what really matters, however, as they show how each state ranks relative to the others after factoring in each state's cost of living.

As you can see, though the mean wage earner in Hawaii may have ranked No. 18 in the nation on a constant basis, once we adjust for the state's high cost of living, the average Hawaiian actually makes less than a worker from any other state. On the other end of the spectrum, while the average worker in Ohio placed 27th in the nation on a constant basis, he/she jumps all the way into the top 10 when we account for the state's low cost of living.

What this all means
Here's where things get tricky: This graph will mean many different things depending on who is viewing it. If you're just out of college and your No. 1 priority is make and save as much money as possible, then the data presented here could help you make a much more informed decision about where to find work.

However, as is the case with many "averages," this data may mean little to other readers. That's because although we might equate a higher salary with a happier existence, there are many variables that are more important once someone's basic needs are met. Your familiarity with a city, proximity to family and friends, the weather, and a host of other variables (a list of which is likely inexhaustible) play an even more important role when it comes to how satisfied you are with where you live.

Hawaii is an ideal example of this: Though the state ranks dead last in earnings, it consistently ranks among the happiest states in America, according to Gallup polls. And in a sub-index measuring, residents of Hawaii report the lowest levels of stress when it comes to their economic life.

That's why I started the piece by saying the data is "interesting, though perhaps not as instructive as you may think."