Over the past 12 months, Amazon (AMZN -1.13%) stock more than doubled to nearly $700 before sliding back down below $600. As a result, many investors are likely wondering if it's a good idea to load up on some shares of the retail giant on that big dip. Let's evaluate Amazon's key fundamentals and growth drivers to find out.

How to value Amazon
Some investors might take a look at Amazon's trailing P/E of 850 and quickly dismiss the stock as overvalued. Its forward P/E of 105 looks better, but it still seems high compared to its projected annual earnings growth rate of 60% over the next five years. That forecast gives Amazon stock a PEG ratio of 5.1. Considering that a PEG ratio under 1 is considered "undervalued," Amazon's stock is expensive compared to its earnings growth potential.

An alternative way to value Amazon is with its forward EV to EBITDA multiple, which compares its enterprise value to its expected true cash earnings. This ratio includes debt and liabilities but excludes non-cash expenses, like amortization and depreciation. Based on that ratio, Amazon stock is trading at its cheapest level in over half a year. 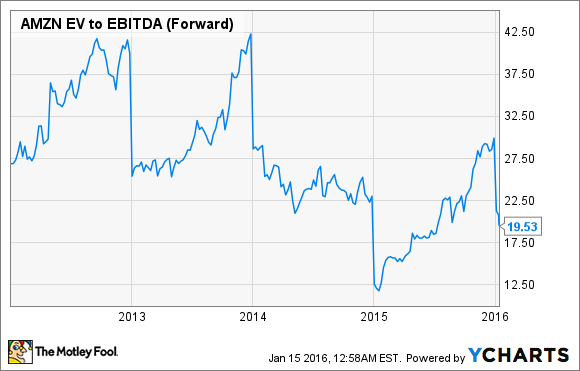 At this rate, AWS could soon become Amazon's most profitable business. Morgan Stanley analyst Brian Novak estimates that AWS' weight on Amazon's top line will more than double, and the unit will contribute around 60% to Amazon's incremental profits through 2017.

Prime growth matters
As for Amazon's core marketplace business, Prime's growth will widen its defensive moat against brick-and-mortar and digital ecosystem rivals. Prime members already get discounts, free shipping on select items, streaming TV shows and movies, and other perks for $99 per year. Amazon has gradually expanded that ecosystem with same-day delivery services, Dash buttons, home services, and other programs. Its voice assistant Alexa is tethering connected appliances and cars to Amazon's ecosystem. Wal-Mart (WMT 0.99%), which has invested billions into beefing up its e-commerce services, has struggled to match Amazon's reach.

What analysts expect
In late December, Amazon reported that it gained over three million new Prime members worldwide "during the third week of December alone." The company also claimed that it sold twice as many Amazon devices as last year during the holiday season, shipped over 200 million more items for free to Prime members, and had its "busiest day ever on Christmas Eve."

We'll have to wait until Jan. 27 to see how much revenue Amazon generated during the holidays, but analysts have high expectations. On average, analysts believe that Amazon's sales will rise 22.7% annually for the quarter, 20.5% for the full year, and 20.9% in fiscal 2016. Wal-Mart, by comparison, is expected to post a 0.4% sales decline for the current year before slightly bouncing back with tepid 2.2% sales growth next year.

Why I'm a buyer
Amazon's stock looks pricey, but it's hard to see its dominance of consumer e-commerce and cloud platform ecosystems ending anytime soon. Instead, Amazon will keep expanding both ecosystems and make it difficult for other retailers or cloud platform providers to remain competitive. Therefore, Amazon is a solid long-term buy in my book, and I'll be looking to buy more shares on any big dips.