Just because a company could pay a high dividend doesn't mean it will. Credit-card network specialist MasterCard (NYSE:MA) has never been very generous in paying dividends to shareholders, and even after a decade of dividend increases, the company still has a very unattractive yield. Yet investors haven't complained very much, in part because rival Visa (NYSE:V) hasn't done much to pay dividends either, but more importantly because the stock has soared over MasterCard's brief 10-year history as a public company.

Let's look more closely at MasterCard to see if the company will give investors more dividends in 2016.

MasterCard plays by the industry's rules
MasterCard has never sported all that high of a dividend yield. When the company went public, its primary focus was to boost its growth rate and take full advantage of the opportunities in the electronic payments space at the time. Dividends have always taken a secondary role in MasterCard's overall strategy.

Yet it's hard to fault MasterCard's willingness to make substantial dividend increase, albeit from those low levels. The company doubled its dividend in two straight years, in 2012 and 2013, and it has pushed its payout up a nickel per share on two occasions since then. The most recent increase was just announced last month, a $0.03 per share boost that amounted to a 19% raise. That's similar to the path that Visa's dividends have taken, with annual increases of 20% to 50% having slowed in more recent years. 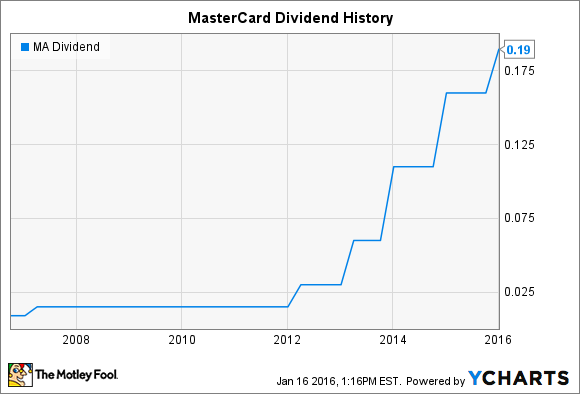 Still, even with those increases, MasterCard doesn't pay a significant fraction of its earnings on dividends. Its earnings payout ratio is just 20%, and with the company having earned an adjusted $0.91 per share in its most recent quarter, the $0.19 per share payout going forward leaves plenty of room for further increases whenever MasterCard decides it wants to put more money toward its dividend.

One reason for the company's stinginess is that MasterCard has traditionally spent substantial amounts on share repurchases. When MasterCard announced its dividend increase last month, it also said it had authorized a new stock buyback program, granting the card network giant the right to repurchase up to $4 billion in stock. The new authorization supplements an older $3.75 billion program, on which the company had just $786 million remaining. Many investors prefer buybacks to avoid the tax consequences of dividends, but income investors like the certainty that dividends provide compared to the haphazard implementation of buybacks.

Also, MasterCard needs to keep cash on hand to embrace strategic opportunities when they arise. Rival Visa has worked hard to boost its presence internationally, and Visa's planned buyout of Visa Europe should give MasterCard an even harder time competing against the industry giant.

When will MasterCard's dividends rise again?
MasterCard's recent dividend increase stuck to its schedule in recent years of declaring an increase toward the end of the year that will be paid early in the following year. As a result, investors shouldn't expect another dividend boost from MasterCard until December. As for its size, the hit the strong U.S. dollar has had on MasterCard's business is likely responsible for the relatively small payout increase it made in 2015. If the dollar finally starts to fall, then the resulting upward push to MasterCard's earnings might give the company the incentive it needs to push up its dividend more substantially in 2016.