Please ensure Javascript is enabled for purposes of website accessibility
Log In Help Join The Motley Fool
Free Article Join Over 1 Million Premium Members And Get More In-Depth Stock Guidance and Research
By Dan Caplinger - Jan 18, 2016 at 8:29AM

The drugstore giant has a long history of treating its shareholders well. Will it continue?

The healthcare industry has gone through massive changes in recent years, and Walgreens Boots Alliance (WBA -1.63%) has changed along with it. The drugstore chain giant has done some massive deals to extend its reach globally, fighting to outgrow rival CVS Health (CVS -1.42%) through a combination of strategies involving international acquisitions. Yet the company's most recent proposed acquisition to buy Rite Aid (RAD -5.14%) has huge implications, among them whether Walgreens will be able to keep offering dividend increases to its shareholders. Let's look more closely at Walgreens to see whether investors should expect a boost in their quarterly checks in 2016.

A great prescription for growth
Walgreens Boots Alliance has increased its dividend every single year for four decades, and that's more than enough to qualify the drugstore retailer as a prestigious Dividend Aristocrat. The company's 1.8% dividend yield isn't particularly distinctive, but it matches up almost exactly with what CVS Health pays.

Investors also have to respect the pace of Walgreens' dividend boosts over the past decade. The company has routinely made double-digit percentage increases in its payout, resulting in more than a fivefold increase in its quarterly dividend since 2005. Only recently has Walgreens had to slow its dividend growth rate, but even the 7% increases it made in 2014 and 2015 were respectable -- albeit slower than the 22% and 27% boosts that CVS shareholders enjoyed. 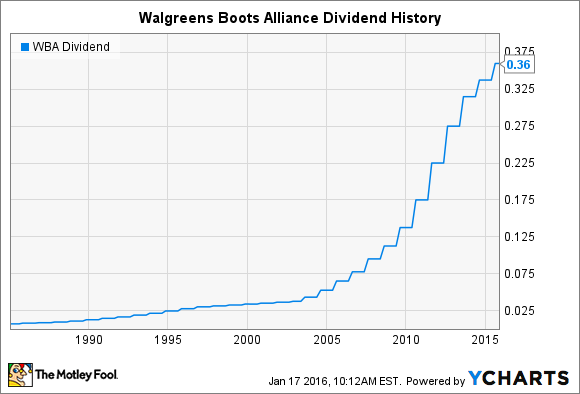 Looking forward, the biggest challenge that Walgreens faces is making good on its strategic vision while preserving its dividend history. In October, the company made a $17.2 billion bid for Rite Aid, and Walgreens structured the bid as an all-cash offer. Assumption of debt will make up some of that amount, but paying $9 per share to Rite Aid shareholders will require a huge amount of upfront cash.

Investors can hope that Walgreens will be able to integrate Rite Aid quickly enough not to have a marked impact on its dividend policy. The company expects that Rite Aid would add to its earnings within the first year after the deal closes, and that could remove some pressure on the dividend.

Moreover, Walgreens management has said that it wants to sustain the dividend. In its quarterly conference call immediately following the acquisitions, Walgreens CFO George Fairweather said that the company "remain[s] committed to a long-term dividend payout rate target between 30% and 35% of adjusted net earnings." The drugstore chain had been supplementing its dividend with extensive stock buybacks, and it said it would suspend its $3 billion share repurchase program to free up cash for the Rite Aid acquisition.

Will Walgreens keep its dividend healthy?
Perhaps most importantly, Walgreens expects earnings to climb in 2016, even with short-term pressure from costs related to the Rite Aid acquisition. An earnings outlook for $4.25 to $4.55 per share for fiscal 2016 would represent growth of 9% to 17% from 2015 levels, and that should help support a similarly sized dividend increase.

As a result, Walgreens investors should expect a higher dividend in 2016, with the timing making it likely to come in the summer. The percentage boost will probably be more in line with the lower raises in the past couple of years than its long-term practice of double-digit percentage increases, but Walgreens has ambitiously laid out a path for the future that could lead to accelerating boosts in the long run.

Dan Caplinger has no position in any stocks mentioned. The Motley Fool recommends CVS Health. Try any of our Foolish newsletter services free for 30 days. We Fools may not all hold the same opinions, but we all believe that considering a diverse range of insights makes us better investors. The Motley Fool has a disclosure policy.