Please ensure Javascript is enabled for purposes of website accessibility
Log In Help Join The Motley Fool
Free Article Join Over 1 Million Premium Members And Get More In-Depth Stock Guidance and Research
By Reuben Gregg Brewer - Jan 19, 2016 at 7:05AM

Alcoa is struggling, but still doing the right things -- which is why 2015's weak ending isn't the end of the world

Alcoa (AA) posted adjusted earnings of $0.04 in the fourth quarter compared with Wall Street expectations of $0.02. Revenues missed expectations by less than 1%, coming in at $5.25 billion. That's pretty good news overall, based on the difficult commodity backdrop, but the stock fell sharply anyway. Some underlying trends are what probably spooked investors, but the quarter really wasn't all that bad when you look at the big picture.

The bad news
The bad news for Alcoa in the fourth quarter was twofold. In the upstream business, which makes aluminum, revenues dropped year over year because of a 28% decline in aluminum prices and 43% plunge in alumina. But everyone expected that upstream would be a trouble spot. Alcoa continues to work on the cost side of the equation here to align its business with the current market, reiterating in the quarterly release the capacity it's closed and its plans for more closures as it prepares to break this division off from the Value Add group.

Meanwhile, the Value Add business, which makes parts out of aluminum and other metals, didn't do as well as Wall Street had hoped. That was something of a surprise. Although this division is supposed to be the company's crown jewel, revenues were down 3% sequentially from the third quarter, after tax operating income was off 16%, and adjusted EBITDA was lower by nearly 12%. That's not such a great trend for a company preparing to stand on its own two feet.

Looks aren't everything
Perception, however, is the biggest issue right now. It's true that Value Add's numbers weren't that great leading into 2016, the year it's supposed to be broken out as its own company. And this after Alcoa has been talking up the business' prospects. So you can understand why investors were a little skittish. For many, Value Add is the only reason to consider owning Alcoa.

However, if you step back, there's really more good going on than bad at Value Add. For example, the company closed out the year with two big aerospace orders, one from Boeing and another from General Electric. Together these deals are valued at some $4 billion and show the strength that Alcoa has built in a key growth market for the company. In 2016 the aerospace segment, which accounts for about 40% of Value Add's revenues, is projected to expand by as much as 9%. 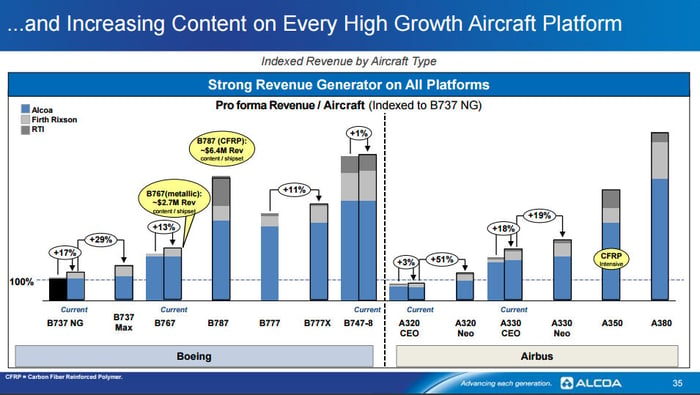 Aloca is positioning for the future in the air. Source: Alcoa.

And while Value Add is expecting weakness in the heavy truck market, automotive, packaging, construction, and turbines are all anticipated to be up in the low single digits this year. So maybe Value Add didn't end 2015 on the strongest note, but the future still looks reasonably bright. It's worth noting, too, that Alcoa is gaining "share" of many of the newest airplane platforms, which should bake long-term recurring revenue streams into the cake.

As for upstream, which is set to retain the Alcoa name after the upcoming split, it's making the right moves in a tough market. That's about the best you can hope for, especially as you watch once-giant commodity players like Alpha Natural Resources and Arch Coal careen into bankruptcy. And even though things are bad, the group still had positive after tax operating earnings in the fourth quarter. So Alcoa's moves appear to be helping to keep upstream above water.

Taken as a whole, Alcoa is just doing OK right now, not great. But that's really not the end of the world considering the headwinds, the corporate makeover, and the solid business prospects building in Value Add.

Still relatively cheap
And if you step back even further, Alcoa looks exceptionally cheap when you compare it to a competitor like Precision Castparts (PCP.DL), which is being bought by Warren Buffett's Berkshire Hathaway (BRK.A 1.66%) (BRK.B 1.71%) for around 3 times revenues. Alcoa, which had revenues of $22.5 billion in 2015, down about 6% from 2014, has a market cap of less than $10 billion. That means it's trading for less than half its sales. 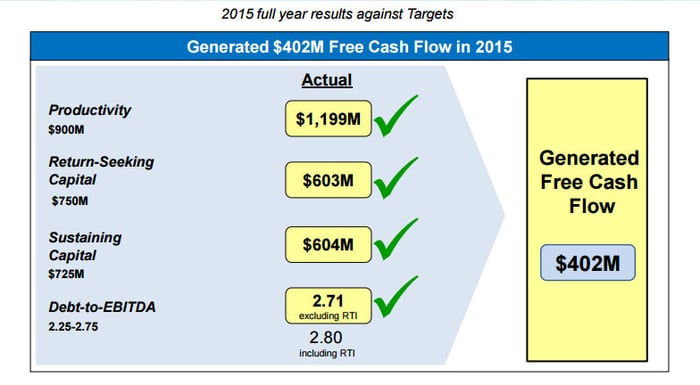 Alcoa is doing a good job of meeting the goals it sets out. Source: Alcoa

Is Berkshire Hathaway vastly overpaying for a company very similar to just one part of Alcoa or is investor sentiment on the aluminum giant overdone? The answer is likely somewhere in the middle, but that still means potential upside for investors willing to take a risk on Alcoa while Mr. Market is so glum on it.

In the end, Alcoa is in a big transition while at the same time working through a difficult commodity market. Last year wasn't great, but that was last year. For this company, the future is going to be very different from the past and it's all still a work in progress as it prepares for the big breakup. And remember that sometimes the progress being made doesn't show up on the top and bottom lines right away.