Alnylam Pharmaceuticals (NASDAQ:ALNY) presented at the J.P. Morgan Healthcare Conference on Monday. Like many presentations at the conference, there wasn't any new data to present and much of the information was a review of the company's RNAi technology and pipeline of eight drugs in the clinic.

Here's the most important slide from the presentation that investors should be focused on: 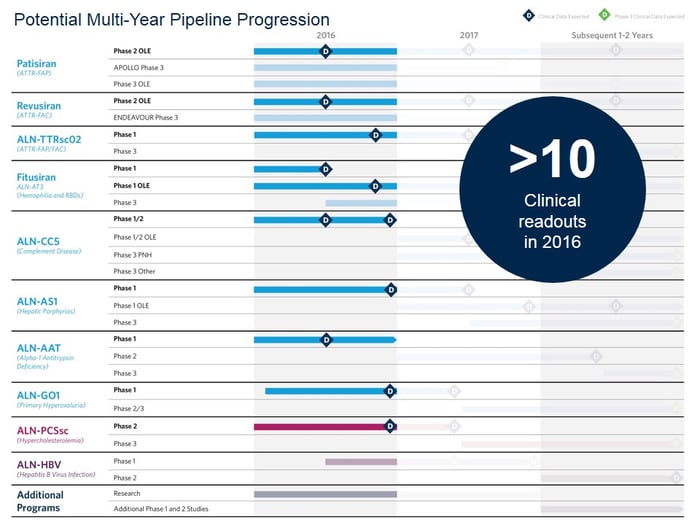 Alnylam won't file its first application to market drugs with U.S. and EU regulators until 2017 and might not get approved until 2018. To increase its value in 2016, Alnylam has to give investors more confidence that it can get its drugs approved through positive clinical readouts.

The first thing you should notice from the slide is that none of the 11 data readouts in 2016 will come from phase 3 trials, the last step before getting drugs approved. That's somewhat disappointing since phase 3 trials often offer investors the best risk-reward proposition.

Fortunately, Alnylam still has plenty of other data readouts for investors.

Open label extensions
Open label extensions (OLEs) are extensions of trials where everyone involved in the trial knows they're on the drug -- that's the "open label" part, as opposed to a controlled double-blind trial where neither the doctor nor the patient knows whether the patient is taking the active drug or the control. Because these are diseases without good treatment options, the OLEs allow patients in the original study to continue to receive the drug candidate before it's on the market.

OLEs are often a no-win situation for companies because they've already proven that the drug worked; showing that the drug continues to work doesn't add much value compared to the risk that it stops helping patients.

But Alnylam is in a battle with Ionis Pharmaceuticals (NASDAQ:IONS) to bring treatments for transthyretin-mediated amyloidosis to market, so the OLE data for patisiran and revusiran this year will be a little more critical than a typical OLE. If the drugs can perform better than Ionis Pharmaceuticals' drug -- aptly called IONIS-TTR -- we could see Alnylam's stock increase even though OLEs aren't usually that big of a deal.

This year will start the battle of the data before we get phase 3 data next year. Ionis Pharmaceuticals will have an update for its OLE in the familial amyloidotic polyneropathy (FAP) version of the disease -- the one that patisiran treats -- as well as phase 2 data in the familial amyloidotic cardiomyopathy version of the diease -- the one that revusiran treats. IONIS-TTR can treat both disease, which is probably an advantage in that it's less work for Ionis Pharmaceuticals to get one drug approved than two, but probably won't matter much if Alnylam and Ionis both get their drugs on the market where the drug with the best data for each disease will prevail.

Don't discount phase 1
Typically phase 1 trials aren't something investors should get excited about. In many cases, the early stage trials are done in healthy volunteers and are mainly designed to test safety of the drug. Even when the drugs are initially tested in patients that have the disease -- cancer drugs, for instance -- it can be hard to asses efficacy in phase 1 trials due to their smaller size.

Alnylam's phase 1 trials, on the other hand, have good biomarkers that can help investors determine if the drugs are working. If the drugs knock down the expression of the protein for the gene they're targeting, it's a good sign that the drug will work since Alnylam is currently six for six in terms of drugs that have entered the clinic and read out clinical benefits.

Of the phase 1 trials set to read out this year, fitusiran for hemophelia looks most promising given the interim phase 1 data looked good enough that Alnylam is already planning on launching phase 3 studies later this year.