Please ensure Javascript is enabled for purposes of website accessibility
Log In Help Join The Motley Fool
Free Article Join Over 1 Million Premium Members And Get More In-Depth Stock Guidance and Research
By Matthew DiLallo - Jan 19, 2016 at 9:36AM

Global resources company offers to sell a stake in its Indonesian unit.

In another sign of how tough things are for Freeport-McMoRan (FCX -0.16%) it has reportedly offered to sell a stake in its crown jewel Grasberg mine in Indonesia in order to bring in some much needed cash. According to reports the company has offered the Indonesia government a 10.64% stake in PT Freeport Indonesia, and is said to be seeking $1.7 billion for that stake. The government now has 60 days to respond with potential buyers for the stake. It's an interesting move for investors to follow because it has big implications not just for the company's balance sheet, but for its valuation.

The crown jewel
At that offer price, Freeport-McMoRan is valuing the entire business at $16.2 billion. Given that Freeport-McMoRan currently owns 90.64% of PT Freeport Indonesia, with the remaining stake being owned by the Indonesia government, that values its stake at roughly $14.7 billion. For perspective, that's about half of the company's current enterprise value: 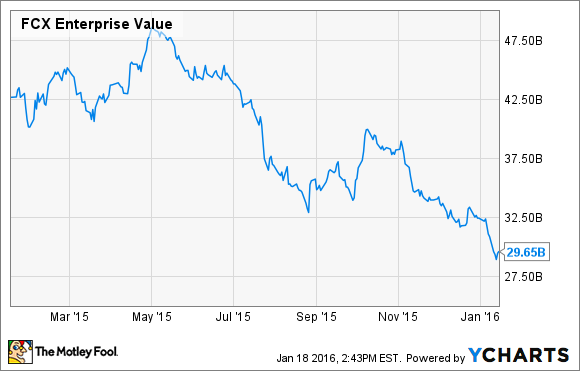 That's noteworthy because Indonesia only accounted for roughly 21% of the company's total revenue last quarter. The implication being that if that one business is worth $16.2 billion, then the rest of the company's assets are worth double what the market is currently valuing the company.

Having said that, it isn't a perfect apples-to-apples comparison because Freeport-McMoRan's Indonesian business has a joint venture with Rio Tinto (RIO 0.37%) relating to its 1995 expansion. That joint venture entitles Rio Tinto to a 40% share of the mine's production above certain levels until the end of 2021, after which Rio Tinto will be entitled to 40% of all production. In other words, while Freeport owns 90% of the business, it's total sales are a bit deflated because of its joint venture with Rio Tinto. What this means is that investors shouldn't use Freeport's asking price as a proxy for the underlying asset value of the company, though it is a starting point.

Further, it is also worth noting that the Grasberg mine is Freeport's crown jewel. Not only is it one of the company's lowest cost mines, but it has decades of growth potential from new expansion opportunities. Those two factors alone make it a premium asset.

What to expect next
That premium aside, it doesn't mean that the government will be willing to pay such a premium for that stake given the current commodities crunch, even if Freeport has an obligation to divest a 30% stake in the business until 2019. That's why it will be interesting to see what the government does.

First, it needs to agree on that valuation, which it might not. Then, once both agree on a price, the government of Indonesia needs to either execute a share purchase agreement or appoint a state owned enterprise to purchase the stake. It has said in the past that two state owned entities, aluminum company Inalum and nickel and gold producer Antam, would lead a consortium to purchase a stake in the company. That being said, they'd need to seek bank financing to fund the purchase, which has proven to be tough to do in the current environment. In other words, there are a lot of potential road blocks before a deal is done.

Investor takeaway
With commodity prices continuing to crumble, Freeport-McMoRan is in desperate need of cash. That's why the company is exercising its option to sell a stake in its crown jewel. It's hoping to fetch a premium valuation on the business, despite the market turmoil. However, a few obstacles remain, which makes this deal no sure thing.

Matt DiLallo has no position in any stocks mentioned. The Motley Fool owns shares of Freeport-McMoRan Copper & Gold,. Try any of our Foolish newsletter services free for 30 days. We Fools may not all hold the same opinions, but we all believe that considering a diverse range of insights makes us better investors. The Motley Fool has a disclosure policy.