Please ensure Javascript is enabled for purposes of website accessibility
Log In Help Join The Motley Fool
Free Article Join Over 1 Million Premium Members And Get More In-Depth Stock Guidance and Research
By Andrés Cardenal - Jan 19, 2016 at 11:00AM

Dividend stocks tend to beat the market over the long term, and investing in companies with growing dividends is a great strategy to maximize returns.

Investing in dividend stocks is one of the most powerful and time-proven strategies to beat the market over the long term. However, successful dividend investing is about much more than picking companies with big dividend yields -- investors looking to maximize total returns should actually focus on companies with solid dividend growth.

Why dividend growth is so important
Dividends don't only provide cash returns for investors. In fact, dividend trajectory says a lot a about the strength of the business and management's level of confidence in the future. When a company offers consistent dividend growth, this generally shows that the business is healthy enough to produce increasing cash flows over the years. Besides, if management is willing to distribute growing cash payments to investors, this can be interpreted as a sign of confidence and optimism about future prospects.

Goldman Sachs analyzed the returns of different kinds of companies based on their dividend policies over the years, and the results are quite telling. Dividend-paying stocks tend to do much better than non-dividend-paying names, and companies with consistently growing dividends materially outperform both those with stable dividends and companies paying no dividends at all.

According to these findings, a $10,000 investment in non-dividend stocks on Jan. 31, 1972, would have turned into $30,316 at the end of 2014. The same amount of money invested in dividend-paying stocks would have an ending value of $461,904, while investing in companies starting new dividends or increasing their dividend payments would have resulted in a much bigger ending capital of $630,024. 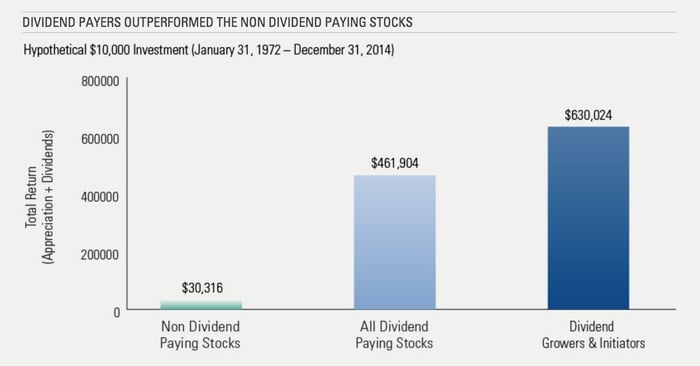 Looking at dividend growth trajectory
Past performance is no guarantee of future results, but we can learn a lot about a company's financial quality and management commitment to growing dividends by analyzing its trajectory of dividend payments in the long-term.

Wal-Mart (WMT 1.85%), for example, is going through a challenging period. The company is closing its underperforming stores and increasing investments in people and technology to accelerate growth. This will hurt profit margins in the coming quarters, and Wal-Mart stock is down by 27% from its highs of the last year due to investor negativity. At current prices, Wal-Mart stock pays a respectable dividend yield around 3.1%.

Since Wal-Mart is facing difficulties, investors could be concerned about the sustainability of dividend payments. However, the company has proven its ability to sustain dividend growth through all kinds of scenarios. Wal-Mart paid its first dividend in 1974, and it has increased payments in each and every year since then.

Wall-Street analysts are on average forecasting that Wal-Mart will make $4.17 in earnings per share during the fiscal year ending in January 2017. Current dividends amount to $1.96 annually per share, so the payout ratio is quite safe at only 47% of expected earnings. Wal-Mart will probably deliver modest dividend growth until the company manages to jump-start growth, but everything indicates that the retail powerhouse has enough strength to continue rewarding investors with growing dividends over the years.

Coca-Cola (KO 0.76%) is another extraordinary candidate to consider when it comes to dividend growth trajectory. Coca-Cola has increased its dividends in each and every year over the last 53 consecutive years, this includes a sparkling dividend increase of 8% for 2015. Coca-Cola stock pays a dividend yield of 3.15%, and the dividend payout ratio is quite reasonable at nearly 64% of earnings forecasts for 2016.

This pristine trajectory of dividend payments is based on rock-solid fundamental strengths. Coca-Cola owns an enormously powerful portfolio featuring 20 different brands making over $1 billion each in revenue around the planet. Additionally, Coca-Cola's gargantuan distribution network protects the business from the competition, securing consistently growing cash flows and dividends over time.

The dividend growth stories of the future
A company's historical performance conveys a lot of valuable information. However, investment decisions need to be made by looking through the windshield, not the rearview mirror. Though a company may not offer a long trajectory of dividend payments, this does not necessarily mean that it can't sustain growing dividends in the future. Even better, buying relatively young dividend stocks with big potential to raise dividends can be a smart approach to capitalize on the power of dividend growth.

Apple (AAPL 2.14%) reinstated its dividend in 2012, and the company has raised its dividend every year since then. Apple is no match to companies such as Wal-Mart or Coca-Cola when it comes to dividend track record, but the company is clearly strong enough to pay growing dividends for years to come.

Apple is the most valuable brand in the world, according to Interbrand, with an estimated brand value of over $170 billion. This competitive differentiation allows the company to operate with enormous profitability, generating massive amounts of cash flow from the business.

Apple produced $69.8 billion in free cash flow during the year ended in September, and dividends amounted to only $11.6 billion, or a small 17% of free cash flow over the period. This clearly shows that Apple has more than enough financial firepower to deliver growing dividends in the future.

Apple stock is currently paying a dividend yield of 2.1%. While its dividend track record is not very impressive, the company seems to be well on track to building an amazing trajectory of dividend growth over the long term.