In the irrational world of investing, one person's trash is another's treasure. The key to successful investing, of course, is to buy the latter and not the former.

Coming off another brutal week, the tech-leaning Nasdaq Composite currently sits some 11% down so far in 2016. Investors are rushing for the exits, and buying surely seems like an unpalatable option to many tech investors. 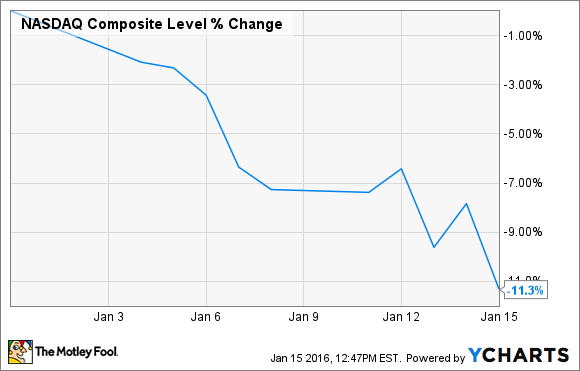 However, with tech stocks reeling, I'm becoming increasingly enamored with a number of depressed stocks in the sector, particularly with microblogging turnaround story Twitter (TWTR -0.92%).

Product innovation continues
As I've outlined in the past, Twitter faces a product crisis, not a business one. And though some criticize it, CEO Jack Dorsey's apparent plans to integrate a long-form "blogging" service into Twitter's platform seems like a complementary way to cater to audiences seeking content beyond 140 characters.

It also carries the benefit of expanding Twitter's possible profit drivers while maintaining its position as an important source of real-time news and analysis. I'm a big believer that executing on this one product addition could almost completely alleviate Twitter's user-growth problems, so long as Dorsey and company deliver on the product-design front.

What's more, there's also a legitimate case to be made that Twitter's other potential growth drivers don't receive ample credit from the market. Periscope, in particular, strikes me as an emerging technology with huge potential to compete for video ad spend in the future. In our increasingly constantly connected world, it's hard to see how live broadcasts from smartphones won't prove a valuable technology for consumers and advertisers alike.

Periscope effectively combines Apple's FaceTime technology with a social network. That strikes me as an incredibly valuable long-term asset that one could easily argue could prove more valuable than Twitter's present core business over the long term. If you consider these kinds of growth drivers in the context of Twitter's plummeting valuation, there's a legitimate case to be made that it could be one of the more compelling contrarian buys in tech today.

Half off Twitter
As of midday during Friday's steep sell-off, Twitter's stock had fallen slightly more than 50% during the past six months. 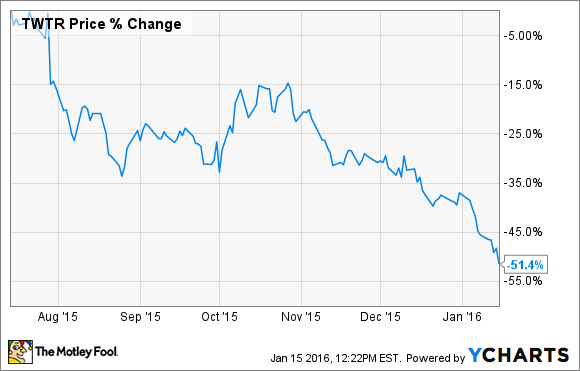 Some of the market's skepticism toward the company is justified amid the largest management reshuffle in the company's history. However, even as its stock slides, the company continues to power toward profitability.

As the company has yet to switch to full-time profitability, Twitter's current P/E ratio, or really its lack thereof, doesn't provide a lot of information about the company's valuation. However, on a forward-earnings basis, Twitter is changing hands today at about 32 times its 2016 estimated EPS.

For context, Facebook remains arguably Twitter's best publicly traded proxy, and it also trades at 32 times its projected 2016 earnings.  LinkedIn sits at 52 times this year's consensus earnings estimates, though not necessarily a perfect comp for Twitter. And while 32 times its expected earnings this year isn't cheap, it's certainly affordable for a company that the analyst community expects to produce an average of 65% annual EPS growth during the next five years.

Twitter, after falling so far, so fast, actually appears fairly reasonably valued relative to the market, especially taking into account the numerous future growth drivers in the company that have yet to augment its financial performance. Though by no means a sure thing, better days are likely ahead for Twitter.

It seems to me as if the market remains dramatically focused on what could go wrong at Twitter, as opposed to what could go right. Those are exactly the kinds of mispricings that savvy investors love.

Andrew Tonner owns shares of AAPL. The Motley Fool owns shares of and recommends AAPL, FB, LNKD, and TWTR. Try any of our Foolish newsletter services free for 30 days. We Fools may not all hold the same opinions, but we all believe that considering a diverse range of insights makes us better investors. The Motley Fool has a disclosure policy.