Please ensure Javascript is enabled for purposes of website accessibility
Log In Help Join The Motley Fool
Free Article Join Over 1 Million Premium Members And Get More In-Depth Stock Guidance and Research
By Dan Caplinger - Jan 19, 2016 at 10:57AM

The specialty-glass maker has put together a short streak of rising payouts, but will it continue?

The use of glass in technology has increased exponentially, and glassmaking specialist Corning (GLW -2.67%) has long been at the forefront of technological innovation in the area. Corning's work in fiber optics helped revolutionize the telecom industry, and its durable Gorilla Glass products have become a key component in leading the rise of mobile devices. Yet some recent struggles in its core industries have left Corning's sales down on a year-over-year basis, and raising some questions about whether the company will be able to continue rewarding shareholders with higher dividend payments. Let's look more closely at Corning to see whether a dividend hike is in the cards for 2016.

Corning's shiny dividend payments
Tech stocks aren't well-known for their dividends, but Corning has been quietly boosting its payouts to shareholders and becoming a solid dividend stock in its own right. In 2011, the company gave investors a 50% dividend boost, and since then, Corning has raised its payouts three more times. Because of the way that Corning has timed its increases, it has consistently paid more on an annual basis for five straight years but will need to make an increase in 2016 in order to keep its young streak alive.

Corning hasn't been tight-fisted about making sizable increases. Jumps like the 50% in 2011 haven't been the norm, but the company has made a couple of 20% boosts. All told, Corning now pays more than double the dividends it paid in mid-2011, reflecting the success that the company has had in penetrating several potentially lucrative industries with its products. 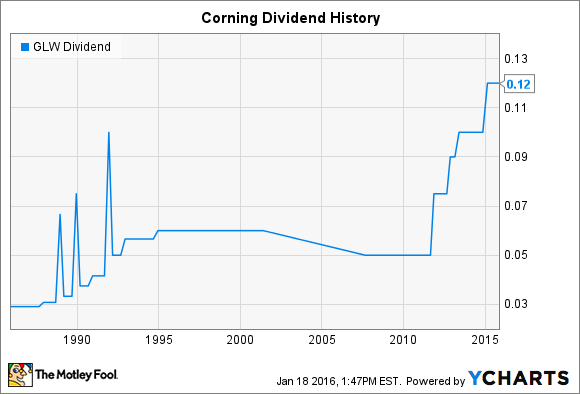 Some investors have gotten nervous about Corning's ability to keep giving investors higher payouts. In its most recent quarter, Corning reported a 5% drop in core net sales, sending core earnings down by a much steeper 15%. The company's efforts to buy back shares have helped cushion the blow in per-share figures, but even with share-count reductions, Corning's 8% drop in core earnings per share hasn't inspired dividend investors to expect an imminent increase in the near future. Weakness in core displays more than offset gains in the optical communications segment, and Corning pointed to the weak Chinese economy and the strong U.S. dollar as factors in holding the company's results back.

Will Corning keep its shareholders happy?
In an unusual move, Corning addressed those concerns head-on, announcing a huge strategic and capital allocation framework. As part of its overall plan to return $10 billion to shareholders by 2019, Corning said that it would use extensive share repurchases, with an effort to keep its debt-to-operating-earnings ratio at around 2. It also said that it anticipates raising its dividend by at least 10% annually between now and 2019.

That doesn't necessarily mean that Corning will have to act immediately to post a dividend increase order to make good on its promise. But Corning's strategic efforts are focused on maximizing its profit potential and its ability to share those profits with its investors. For instance, earlier this month, Corning said that it would allow Dow Chemical (DOW) to take full control of their Dow Corning joint venture, essentially letting Corning cash out and redeploy its assets in ways that connect better to its core mission.

Thanks to a dividend policy that involves paying out less than 40% of its earnings in the form of dividends, Corning has plenty of room to consider making additional future dividend increases. Investors shouldn't count on a near-term move, but with the company having specifically recommitted itself to dividend growth, Corning can't afford to wait beyond 2016 to get moving in the right direction with its quarterly payouts.

Dan Caplinger has no position in any stocks mentioned. The Motley Fool recommends Corning. Try any of our Foolish newsletter services free for 30 days. We Fools may not all hold the same opinions, but we all believe that considering a diverse range of insights makes us better investors. The Motley Fool has a disclosure policy.