Investors should be looking for business results from outside North America, whisperings of 2016, and integrating Cameron International's results this coming quarter.

We are all pretty well aware of the impact that the decline in oil prices has had on the market and the performance of many companies in the space, but you have to give a slight tip of the cap to Schlumberger (SLB -0.51%) for the way that it has managed the downturn. Compared to its peers, the company's stock has held up even after we consider that Halliburton (HAL -0.04%) is still planning to pay a high price for Baker Hughes (BHI). 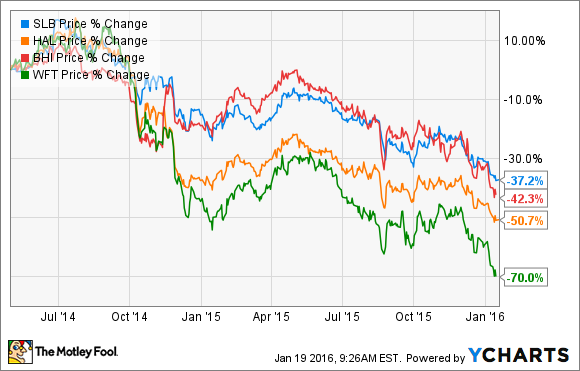 The reason that Schlumberger has been able to keep its head above water better than its peers was its higher margins overall and less exposure to the North American market. Now that the rest of the world is feeling the pain of oil prices, will this geographic advantage hold up? Let's take a look at what's going on internationally as well as two other key things to watch when Shclumberger reports its earnings on Jan. 22.

Resilience of the international market
One thing that is still impressive to look at is how well Schlumberger has been able to maintain its operational profit margins during the downturn. Even though revenue has declined at a rate in line with its peers... 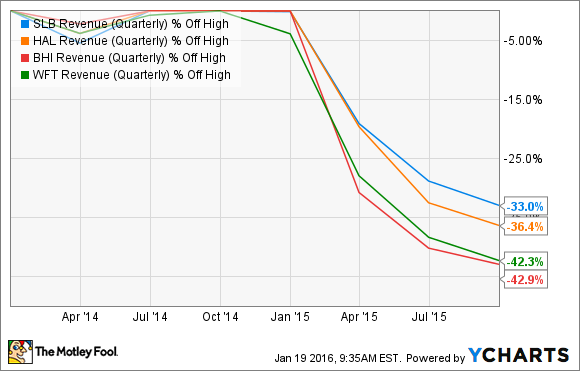 ... its EBITDA margins have remained rather strong the whole time. 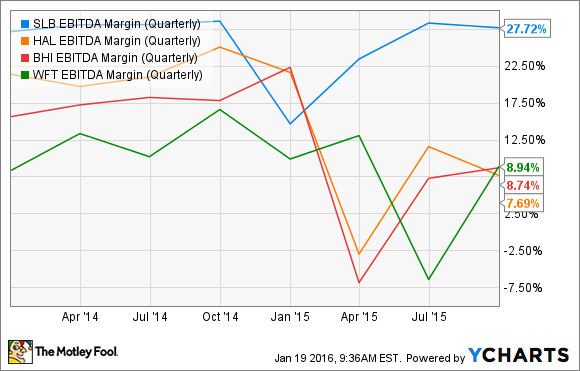 A large component of that resilience has to do with Schlumberger's geographic footprint. It has a much larger presence internationally while North America is a much smaller portion of the business in relation to Halliburton and Baker Hughes. These parts of the world have oil projects that take longer to develop -- and are hence locked into longer contracts -- and some have a bit more pain tolerance than American shale producers.

It appears, though, that cracks are starting to emerge here as well. In its most recent presentation, Schlumberger's management did state that the international market is starting to see larger cuts in spending from producers. This was very prominent for the company as it said year-end sales were quite weak. The one exception to this trend in declining activity is the Middle East, where Schlumberger says -- and we've all pretty much noticed -- it remains strong. This quarter will be a good time to see how much its Middle East business can prop up the rest.

A preliminary look at 2016 spending
Schlumberger, Halliburton, and the other major oil services companies are some of the first phone calls that producers make when they are setting their budgets. This also means that the companies are great aggregators of information about the oil patch and what investors can expect for the year. So if you are looking for information about the coming year and possibly into 2017, reading Schlumberger's outlook is a great place start.

Last quarter, CEO Paal Kibsgaard noted that the company wasn't expecting to see a significant price turnaround until late 2016 and possibly not until 2017. Since then, we have seen oil prices decline even more. It's probably worth checking to see if there are any significant changes to its outlook.

This time, we should see some results from Cameron
Last quarter, there was hope that we would get a little peek at what the results might look like for Schlumberger when it completes the acquisition of Cameron International (CAM.DL). Unfortunately at the time, the deal was still going through the regulatory approval process. A time when companies are pretty mum about such things.

Now that the deal has received regulatory approval and Cameron's shareholders have approved the deal, though, we should start to see what the combined company will start to look like results-wise. As you might expect, the first couple of quarters probably won't look as good because the company will be spending money on restructuring costs and not yet realizing the benefits. So on top of the actual results that we might get to see, investors should also watch what kind of financial targets management will set for the combined entity.

What a Fool believes
If investors are expecting fireworks from Schlumberger this coming quarter, chances are they will be disappointed. All signs seem to indicate that its earnings will again decline as drilling activity continues to dry up. How much its international segment holds up is perhaps the more important factor to the company right now. If it can continue to get some strong results there, it should be able to keep outperforming its peers.

The Motley Fool owns shares of and recommends Halliburton. Try any of our Foolish newsletter services free for 30 days. We Fools may not all hold the same opinions, but we all believe that considering a diverse range of insights makes us better investors. The Motley Fool has a disclosure policy.