Wal-Mart (NYSE:WMT) is the biggest private-sector employer in the world, with nearly 2.1 million employees around the planet. The retailer has long been criticized for paying low wages and providing working conditions that leave much to be desired, and this is a hot area of discussion now that the minimum wage is under debate in the U.S.

On one hand, salaries are an important expense for Wal-Mart, and the company operates in an industry in which profit margins are aggressively low. This would indicate that Wal-Mart does not have a lot of room to raise wages.

However, employees are a resource, not just an expense on the income statement, and things look very different when factoring productivity and customer satisfaction into the equation.

Wal-Mart is not like Apple
Andy Puzder, CEO of CKE Restaurants -- parent company of Carl's Jr. and Hardee's -- wrote an interesting op-ed for The Wall Street Journal a few weeks ago [subscription required] about raising the minimum wage and what this could mean for companies in industries such as retail and restaurants. The piece highlights how big tech companies like Apple (NASDAQ:AAPL) make tons of money per employee, so they can pay considerably higher wages without hurting overall profitability too much. Wal-Mart, on the other hand, is in a very different situation.

According to these calculations, Apple makes $39.5 billion in annual profits and has nearly 97,000 employees, which  means Apple is making a big annual profit per employee of $407,000. Most Apple employees earn wages considerably above the minimum wage level, so a minimum wage increase would probably have a modest impact on overall wage costs for Apple. Still, if Apple decided to increase its wages across the board, the company could easily afford to pay considerably higher levels while still making huge amounts of money per employee.

The piece then calculates the average annual profit per employee for all retailers, restaurants, supermarkets, and retail pharmacies in the Fortune 500 list. The number amounts to just $6,300 per employee. Assuming the average employee in the retail sector works 30 hours a week, raising the minimum wage from $7.25 to $9 an hour would mean an increase of $2,730 in annual wage costs per employee, Puzder calculated.

This would reduce annual profit per employee by 43%, which would clearly affect the value of those jobs for the companies involved. Puzder's op-ed concludes:

That makes those jobs less valuable to the company and creates an incentive to eliminate positions. Not surprisingly, the Congressional Budget Office found that increasing the minimum wage to $9 an hour would cost the economy about 100,000 jobs.

What Wal-Mart can learn from Costco
Discussing the minimum wage is not the same thing as discussing whether a company should raise wages or not. If regulators impose minimum wages above free market levels, meaning the wage levels where labor supply meets demand, this could be quite damaging in terms of overall employment levels in the economy. On the other hand, offering higher wages and better employment conditions can be a positive for Wal-Mart if the company manages to attract and retain a more productive workforce.

Costco (NASDAQ:COST) pays substantially higher wages than Wal-Mart. According to data from jobs and recruiting site Glassdoor.com, a cashier at Costco makes an average of $15.09 an hour versus $9.04 an hour for a Wal-Mart cashier. In addition, Costco offers superior benefits, such as health insurance and 401(k) plans, and it provides abundant opportunities for professional growth to employees at different levels.

However, it's been noted that higher wages can pay off for a company as they help keep employee turnover low and increase worker productivity.

A more productive workforce can drive superior customer service, and this has major implications in terms of sales and overall financial performance. The direct impact of wages on revenue is hard to measure in monetary terms, but a more motivated and efficient workforce can keep operations running smoothly and provide a better customer experience, and this can make all the difference in the world over the years .

Unsurprisingly, Costco stock has crushed Wal-Mart in the last decade, so investors have valid reasons to applaud Costco's innovative approach to human resources and wages. 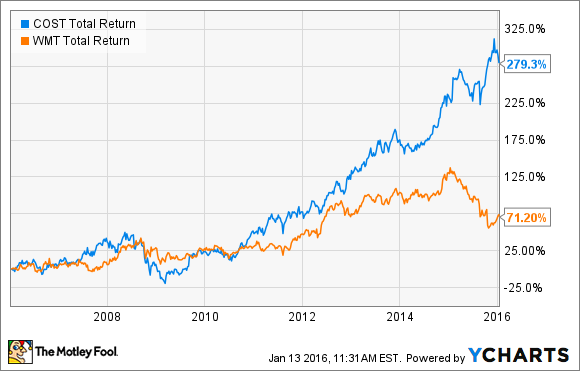 Employees are not only an expense line in the income statement; they are also a valuable resource for a company, perhaps even the most important resource when it comes to building a healthy business in the long term. If Wal-Mart can translate higher wages into a more productive workforce and a more satisfied customer base, then the company does not need to sacrifice profits to pay higher wages. Over the long term, what's good for Wal-Mart employees can also be good for the company's customers and investors.