What: As oil prices plunge yet again on Wednesday, shares of Seadrill (NYSE:SDRL) are down a whopping 22% in mid morning trading as analysts at Bank of America Merril Lynch downgraded the stock to underperform. Not surprising, but the news of the downgrades and oil prices has also sent shares of Seadrill's subsidiaries, Seadrill Partners (OTC:SDLP) and North Atlantic Drilling (NYSE: NADL) down 15% and 10%, respectively.

So What: I mean, what else can you say when oil prices are pushing below $28 per barrel? At these prices, producers are simply not generating enough cash to justify spending, even after the industry cut back on capital spending by more than $200 billion in 2015. Chances are we will see similar spending cuts in 2016. This is acutely an issue for Seadrill because many of the rigs in its fleets are designed for harsh environments like the ultra deepwater and Artcic environments, two of the most expensive places to develop oil fields.

The fact that Merril Lynch downgraded Seadrill's stock on Wednesday isn't any revelation to the market. Considering that shares are now down more than 95% over the past 18 months, you might say that Merrill Lynch's analysts were a little late to the game in downgrading this stock. 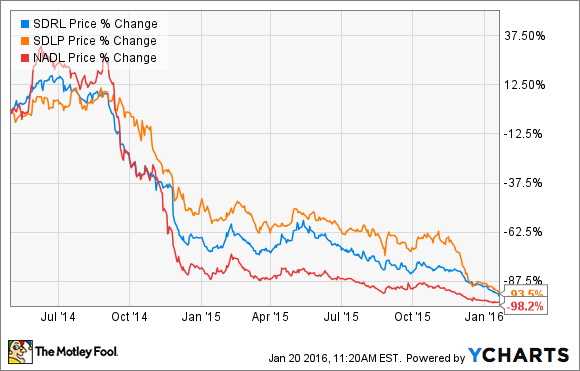 Now What: In terms of the company itself, Wednesday's analyst downgrade doesn't mean much. In fact, in the recent weeks the company has made some moves to increase its chances of making it out of this industry downturn alive. In no way is Seadrill or its subsidiaries out of the woods yet. Oil is too cheap for rig demand, and there were too many rigs on the market when oil was at $100 a barrel. It will take some very, very smart moves from management at Seadrill to manage its capital and debt obligations over the next year or two if investors want any hope of seeing some semblence of a recovery.