Please ensure Javascript is enabled for purposes of website accessibility
Log In Help Join The Motley Fool
Free Article Join Over 1 Million Premium Members And Get More In-Depth Stock Guidance and Research
By Adam Levine-Weinberg – Jan 20, 2016 at 8:10AM

The activist investor's plan to boost Macy's stock price by creating a pair of joint ventures for the company's real estate is hardly foolproof.

According to prominent activist investor Jeffrey Smith of Starboard Value, Macy's (M 3.19%) is sitting on a real estate gold mine. Six months ago, he declared that Macy's shares were dramatically undervalued during a presentation at the Delivering Alpha investing conference.

In a presentation released last week, Starboard Value presented a more detailed plan for how Macy's should extract value from its real estate holdings. However, it's far from clear that the plan actually creates much (if any) value.

Macy's stock soars, then plummets
By the time Smith made his original presentation last July, Macy's stock had already surged to an all-time high around $70. Nevertheless, Smith argued that if the company monetized its vast real estate holdings -- possibly by creating a real estate investment trust to hold its property -- Macy's stock could be worth more than $125.

Since then, Macy's stock has lost nearly half of its value. Any investor excitement about getting value out of Macy's real estate has been far outweighed by Macy's poor operating performance. 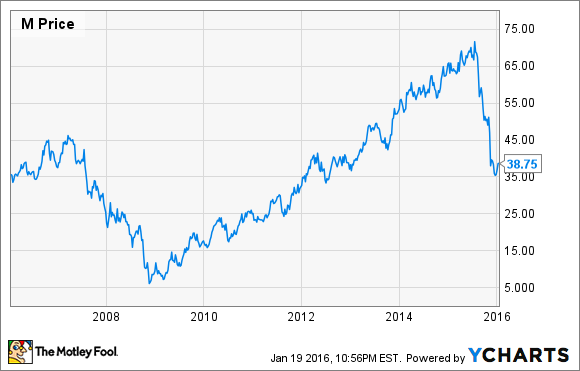 Indeed, as of July, Macy's still expected to post comparable-store sales growth of about 2% and earnings per share of $4.70-$4.80 in fiscal 2015. After multiple guidance cuts, Macy's now expects full-year comparable-store sales to decline 2.7% and EPS of $3.85-$3.90. The EPS guidance would be even worse but for a $250 million one-time real estate gain.

Starboard's plan
Starboard Value seems to have toned down its ambitions for Macy's. In the fund's most recent presentation, it estimated that Macy's could boost its stock price to at least $70 by extracting value from its real estate, with upside beyond that from other potential profit-improvement initiatives.

The crux of its proposal is a plan to place most of Macy's real estate assets into two subsidiaries that would eventually become joint ventures with one or more real estate investors. By raising debt backed by the properties in these joint ventures, the remaining Macy's retail business could pay off nearly all of its debt.

This plan would put Macy's on the hook for $937 million in annual rent payments to the new joint ventures. However, thanks to lower interest and tax expense -- plus Macy's share of the real estate joint venture profits -- free cash flow might decline by less than 5%.

Where's the value?
Starboard Value says that the Macy's operating company (excluding its real estate joint ventures) would be worth about $43 after these moves. Including the real estate value, Macy's stock value would be closer to $70. This assumes that Macy's would continue to have an enterprise value of 5.75 times its earnings before interest, taxes, depreciation, and amortization (EBITDA).

Enterprise value includes both the value of a company's net debt and the value of its stock. Starboard Value's financial model shifts $6 billion-$7 billion of debt from the main company to the real estate joint ventures. As a result, while the main company has a lower enterprise value under this plan, its stock value is assumed to be higher because the debt has been paid off.

If Macy's transfers its real estate to joint ventures, its rent expense would soar.

Yet on a cash flow basis, there's no improvement. Starboard Value is just moving real estate, cash, and debt around, but none of this would make Macy's produce more cash flow.

Furthermore, this analysis ignores the debt-like qualities of Macy's huge lease obligations under this scheme. This seems particularly implausible because of expected changes to accounting guidelines that will force companies like Macy's to recognize a liability related to future lease payments.

For Macy's, the liability could be seven or eight times its annual rent expense of $937 million under the Starboard Value plan. If the resulting "adjusted debt" of about $7 billion is factored into the enterprise value calculation, Macy's stock would be worth less than $20 before the impact of its real estate earnings. Including the real estate value, the stock might be worth $45 -- not much more than its current trading price.

To reward investors, Macy's needs to create value
Fortunately, Macy's appears to be pursuing a more promising real estate strategy than the one proposed by Starboard Value. To create value, it needs to either boost its cash flow or find ways to return cash to shareholders without significantly harming its future cash flow.

In some cases, this could mean closing Macy's stores, when the value of selling the properties outweighs the stores' earnings. In other cases -- particularly for Macy's flagship stores in New York, Chicago, Minneapolis, and San Francisco -- the company can downsize without hurting sales too much, and then sell or redevelop its currently underutilized space.

Adam Levine-Weinberg owns shares of Macy's. The Motley Fool has no position in any of the stocks mentioned. Try any of our Foolish newsletter services free for 30 days. We Fools may not all hold the same opinions, but we all believe that considering a diverse range of insights makes us better investors. The Motley Fool has a disclosure policy.