Please ensure Javascript is enabled for purposes of website accessibility
Log In Help Join The Motley Fool
Free Article Join Over 1 Million Premium Members And Get More In-Depth Stock Guidance and Research
By Lee Samaha - Jan 20, 2016 at 11:22AM

The industrial giant trades on a favorable underlying cash flow valuation and represents a good value in the sector.

If you like Honeywell International's (NYSE: HON) prospects of hitting its guidance in 2016, then don't miss the chance to buy the stock, because it's a lot cheaper than many people might think. The aerospace, controls, and materials company represents a good value in the industrial sector. Here's why.

Honeywell's underlying cash flow
In a nutshell, Honeywell International's underlying free cash flow, or FCF, generation is a lot stronger than it looks. Why is this important? Simply put, because FCF (operating cash flow minus capital expenditures) is money a company can use to pay dividends, make buybacks, or secure earnings-enhancing acquisitions.

In Honeywell's case, the company is in the middle of a five-year plan (2014 to 2018) intended to generate 4% to 6% sales growth per annum, with margin expansion helping generate double-digit earnings growth along the way. However, growth plans usually require investment, and Honeywell's capital expenditures are eating into its cash flow. 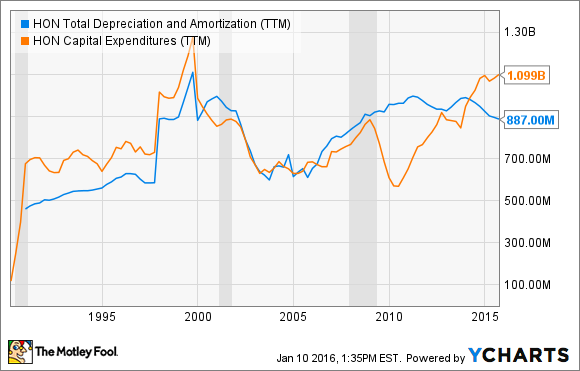 In fact, the ratio of capital expenditures to depreciation and amortization has been around 1.2 to 1.25 in the last couple of years, when a ratio of 1 to 1.1 is more of a normal rate for an industrial company.

Honeywell International's guidance
As you can see (last column) from Honeywell's guidance for 2016, management expects a similar level of capital expenditure as in 2015, and its FCF conversion (the amount of net income converted into FCF) is forecast to be at 90%, moving toward 100% by 2017. 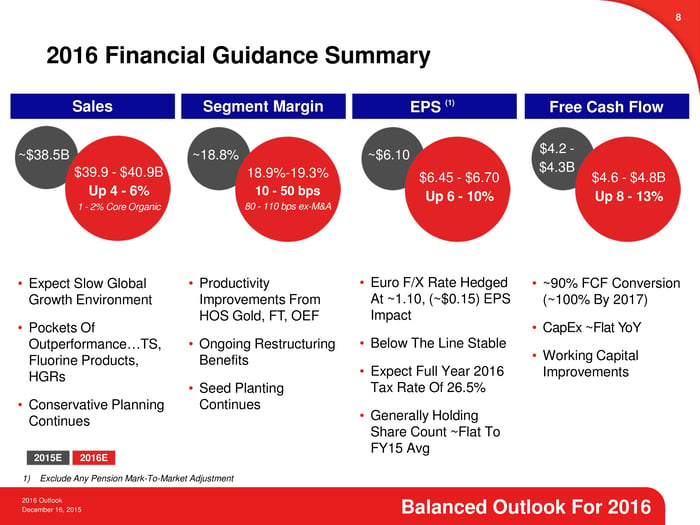 As you can see in the following chart, Honeywell International's FCF conversion tends to bounce around -- this isn't unusual -- but the average is 1.13 in the last 10 years. In other words, recent conversion has been low because of investments. 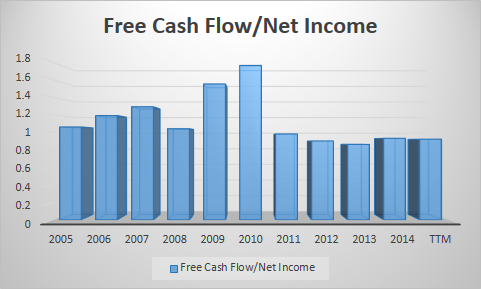 Valuation scenarios
Honeywell's current Enterprise Value (market cap plus net debt), or EV, is around $76 billion. A look at the company's pre- and post-recession valuation suggests the company trades on a multiple of 17.5 to 22.5 times. 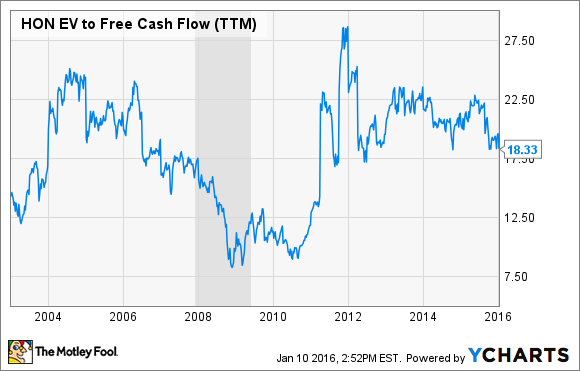 The following table outlines some scenarios where FCF conversion gets to 100% by 2018, and it factors in different net income growth rates for 2017 and 2018. As you can see when comparing that to the chart above, each scenario makes Honeywell look like a good value compared to historical valuations. Moreover, Honeywell should come out of the five-year plan in 2018 as a company with a higher margin profile.

Data source: Company presentations and author's analysis. *Expected net income growth rate in 2017 and 2018 from the midpoint of 2016 net income.

The takeaway
All told, on valuation grounds, Honeywell looks like a good value, but as ever, there are caveats. Honeywell has a good record of meeting its earnings expectations, with analyst estimates exceeded in its last four quarters, but current conditions are deteriorating in the industrial sector. In other words, the company still needs to make its earnings numbers in 2016. Nevertheless, provided the global economy continues seeing the kind of growth rates generated in recent years, then Honeywell International can outperform its sector.