Once oil prices finally begin to rebound, which at this point is anyone's guess, oil companies won't be so quick to put drilling rigs back to work. Instead, according to analysts at Guggenhiem, they'll spend the next few years delevering their balance sheets. In particular, its analysts believe that Devon Energy (NYSE:DVN), Chesapeake Energy (OTC:CHKA.Q), and Continental Resources (NYSE:CLR) will be "in a delevering phase for years."

That trio is just a sample of the dozens of oil and gas companies that used debt to push U.S. oil production higher. As the chart below shows, all three have rather steadily grown their debt over the past few years, which has been a key fuel behind production growth. 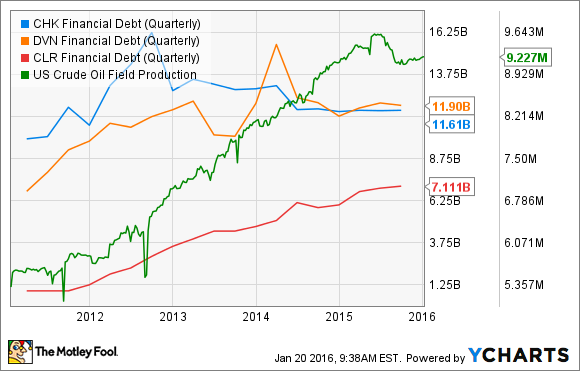 That said, as these companies have more or less put the brakes on debt issuance, production growth in the country peaked and is now in decline.

... must come down
Looking ahead, the industry isn't going to be able to use debt to fund growth to the same degree as it has in the past. Continental Resources, for example, has set a long-term sustainability target for its net debt to be no more than 1.5 times its EBITDA. That's an issue for the company because even once oil prices rebound past $60 a barrel,1 that number would be 2.5 times, unless it pursues other avenues to delever its balance sheet. However, Continental Resources' current plans once oil prices rebound is to simply live within its cash flow and use the efficiencies gained over the past few years to grow its production and earnings, not debt. That means it plans to slowly grow into its leverage by growing EBITDA, not necessarily focus on reducing debt.

Additionally, Devon Energy will likely slowly delever by growing within its cash flow. Having said that, it did recently spend $1.15 billion in cash to acquire more acreage in two of its emerging oil plays. It plans to pursue a number of non-core asset sales in 2016 in order to offset that acquisition cost, with the company looking to divest between $2 billion and $3 billion in assets this year. However, with over $1.8 billion in cash on hand at the end of the third quarter and an investment-grade credit rating, it has plenty of time. Furthermore, once those asset sales are complete, it will likely follow Continental by focusing on organically growing its cash flow instead of focusing on reducing its debt.

Chesapeake Energy, on the other hand, is in a much tighter spot and needs to focus on the other side of the equation and get its debt level lower. That's one reason why it recently issued $2.35 billion in second lien notes in exchange for $3.8 billion of its outstanding unsecured notes, resulting in a net debt reduction of roughly $1.5 billion. That said, its debt level has a long way to drop before it's at a more sustainable long-term level. In fact, some analysts would argue that the only way it will be able to ensure long-term sustainability is by reorganizing through bankruptcy. The company, however, would beg to differ and thinks that its operating efficiencies will enable it to spend significantly less money in the future to maintain and grow production, allowing it to generate excess cash flow that it will use to delever once commodity prices improve. Also, asset sales and joint ventures will likely be pursued in order to put Chesapeake on the path toward long-term sustainability.

Investor takeaway
For years, oil companies have been using debt to fuel production growth. That fuel source, however, has now been cut off, and companies will now more than likely spend the next few years paying down debt instead. Many will do this by using the incremental cash flow generated by the eventual rebound in oil prices to reduce debt instead of spending all of it to push production higher.