Please ensure Javascript is enabled for purposes of website accessibility
Log In Help Join The Motley Fool
Free Article Join Over 1 Million Premium Members And Get More In-Depth Stock Guidance and Research
By Reuben Gregg Brewer - Jan 20, 2016 at 9:35AM

Ashland is breaking up its business, and that could make 2016 a great year. Honest.

Ashland's (ASH -0.23%) shares are down nearly 25% from their early 2015 highs. Revenues have been falling for four consecutive fiscal years. Yet 2016 could be Ashland's best year yet.

How could that be? Easy. The chemical company is in the midst of a big corporate makeover, and it looks as if it could be largely completed this year.

Chemicals and more
On the surface, Ashland is a chemicals company with a global reach and a broad product portfolio. However, underneath there's a whole business that doesn't seem to fit: Valvoline. This is a company that makes motor oil for cars and trucks and has a collection of service centers where it performs oil changes. While refining is clearly in Ashland's sweet spot, Valvoline in a broader sense doesn't seem to fit as well, since it really has a public brand image unto itself.

Indeed, the differences between Ashland's broader business and Valvoline is one key reason chemical maker is planning to spin the unit off, tax-free, to shareholders. That transaction is likely to be completed in 2016. But this is really the culmination of many moves, because Ashland has also been selling non-core businesses, such as water treatment and biocides, so it can focus on its most profitable opportunities. Separating Valvoline from Ashland marks an important crescendo that could lead to a big shift for both companies.

And, perhaps equally important, Ashland's move feels less like financial engineering than, say, Westlake Chemical Corp.'s (WLK 1.86%) move to split off part of its business into Westlake Chemical Partners LP (WLKP 1.07%). After the split Valvoline will control its own destiny while Westlake is still in charge of its former assets through a general partner interest and material direct ownership in the new entity.

Valvoline has been changing more oil than its peers. Source: Ashland.

Growth
In fact, Valvoline appears to have a substantive business and bright future without its former parent. For example, in 2016 Valvoline is planning to increase its new store openings. Although the stores make up just 20% of that business, its quick-lube shops have been outperforming their peers, and the group has put up nine years of same-store-sales growth. But it's important to note that this is the very public face of a company that sells to do-it-yourself types (29% of sales), installers (22%), and original equipment manufactures (29%).

The more people that see the 150-year-old premium oil brand, the more likely it is that the Valvoline gets selected as the provider of choice. And that should help bolster the company's position in its other three segments. This should become even more clear once Valvoline and Ashland part ways.

But Ashland isn't exactly sitting around doing nothing in chemicals. The company breaks its chemicals business down into three parts: Foundational (15% of EBITDA), Niche (30%), and Core Growth (55%). Core growth is not only the biggest segment, but, as the names suggest, it's also where the most spending is taking place. For example, pharmaceuticals, personal care, and coating are important Core Growth markets. Right now Ashland has a relatively small share in each, but it's looking to grow. And each market is expected to expand faster than the global economy. That's a big opportunity. 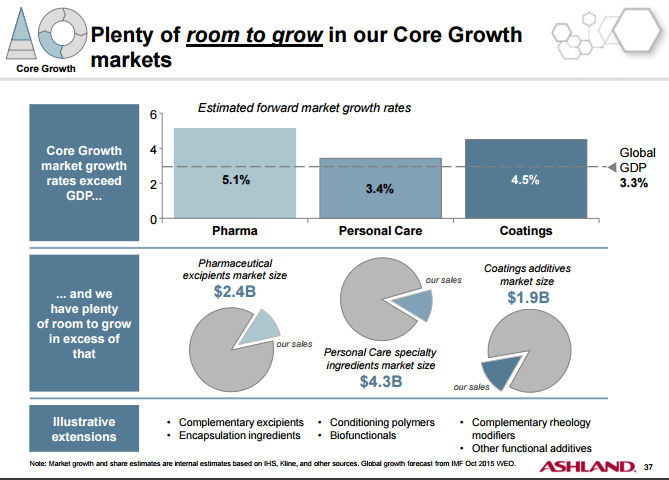 Some of Ashland's opportunities in core growth areas. Source: Ashland.

One of the key changes the company is making in the Core Growth area is a shift from a supplier to a solutions provider. That means working with customers to bring new chemicals to market that meet their exact needs. If Ashland can make that shift, it should cement long-term relationships with key customers around the world. And that should help to boost its growth profile along the way.

Execution
This change is all about execution. So far it's been going reasonably well. The big problem has been that some of the company's end markets have been weak, such as selling chemicals to the fracking industry, and revenue lost from divestitures has been hiding underlying strength in other areas. On top of these issues, currency headwinds have pushed results lower, too.

Although there's no way for the company to solve end-market woes at the oil drillers or to change the direction of currency moves, 2016 is the year the benefits of the corporate makeover should start to show up more clearly. And that's why 2016 could be the best year yet for Ashland. Clearly, though, there's a lot more to do before and, and perhaps more important, after the spin off.

Which brings the Westlake split back into view. Since the break up in mid-2014, Westlake Chemical Partners has seen its top line shrink steadily every quarter. Which helps explain why the shares are down some 33% from recent highs. Westlake Chemical's shares have done even worse, falling nearly 50% from their recent highs, despite a far more stable revenue picture. Ashland's decision to jettison Valvoline looks like it has a sounder foundation to me, but if either company falters after the split... basically, it's all about execution from here.

But if Ashland can keep dotting the Is and crossing the Ts, this year might just be a pivotal turning point. You'll just want to keep watching to make sure the company continues to hit its targets along the way.