Please ensure Javascript is enabled for purposes of website accessibility
Log In Help Join The Motley Fool
Free Article Join Over 1 Million Premium Members And Get More In-Depth Stock Guidance and Research
By Steve Heller - Jan 20, 2016 at 10:00AM

3M has a rich legacy as a dividend payer and raiser. It also has the financials to support an increase. 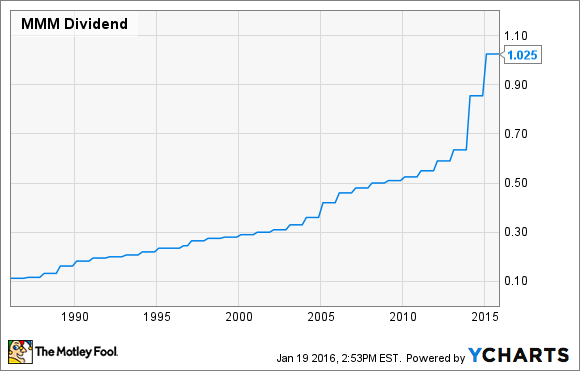 When it comes to dividends, 3M (MMM 1.04%) is in a class almost by itself. It's paid a dividend without interruption for the last 98 years, and has consecutively increased its annual dividend payment for the past 57 years. There are only six companies in the world that have raised their annual dividends for more consecutive years than 3M.

Given this rich history as a dividend payer and dividend aristocrat, a status earned after a company increases its annual dividend payment for 25 years in a row, 3M investors have grown to expect that it will raise its dividend year in and year out. But before jumping to this conclusion, it's worth taking a look under the hood.

How much does 3M already spend on dividends?
Through the first nine months of 2015, 3M spent $3.075 per share on dividends -- or approximately $1.9 billion in total, based on 620.6 million basic shares outstanding. During this period, 3M earned $3.8 billion in net income -- or $6.03 per share. Put together, 3M has spent 51% of its net income on dividends in 2015, a figure known as its dividend payout ratio. At 51%, management has the capacity to increase the dividend without overburdening its net income.

On a cash-flow basis, where dividends are funded, the picture is also encouraging. 3M generated nearly $3.1 billion in free cash flow during the first nine months of 2015, which is leftover generated cash after capital expenditures like property, factories, and equipment, have been made. In total, 61% of 3M's free cash flow funded dividend payments during this nine-month period, suggesting there's likely room to increase the dividend incrementally without it negatively affecting operations.

The debt picture
Investors also have to consider the interest 3M pays to service its debt. At the close of the third quarter, 3M owed $11.3 billion in total debt, and had $1.8 billion in cash on hand. It paid a manageable $104 million in interest to debt holders during the first nine months of 2015, which represented less than 3% of its net income during the period.

Although $11.3 billion in debt may sound like a large amount compared to 3M's cash on hand, the company maintains a AA- credit rating from S&P 500 with a stable outlook, which is considered the lowest high-grade debt. Additionally, with a debt-to-equity ratio below one, 3M's debt load doesn't appear to be overly burdensome, despite recently reaching decade highs. 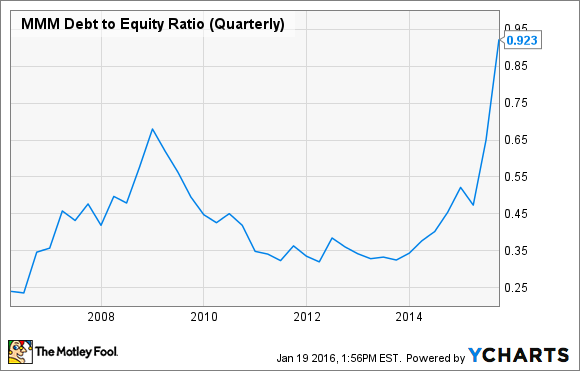 A matter of time
Between 3M's legacy as a dividend payer and raiser, and the financials to support an increase, it seems likely that investors will enjoy a fatter dividend paycheck in 2016. However, the increase may be more modest than in 2015, when management juiced the dividend by 20%.

Steve Heller has no position in any stocks mentioned. The Motley Fool has no position in any of the stocks mentioned. Try any of our Foolish newsletter services free for 30 days. We Fools may not all hold the same opinions, but we all believe that considering a diverse range of insights makes us better investors. The Motley Fool has a disclosure policy.