Please ensure Javascript is enabled for purposes of website accessibility
Log In Help Join The Motley Fool
Free Article Join Over 1 Million Premium Members And Get More In-Depth Stock Guidance and Research
By Dan Caplinger - Jan 20, 2016 at 8:03AM

The insurance giant has recovered from the financial crisis. Will shareholders benefit?

Seven years ago, American International Group (AIG 1.92%) looked like it would be one of the casualties of the financial crisis. The stock had lost a whopping 99% of its value, and dividend investors had seen a healthy quarterly payout disappear in the wake of huge losses and a massive government bailout. Now, though, AIG has turned itself around by focusing on its most lucrative business lines. With a property and casualty focus that resembles what the strategy that Dow component Travelers (TRV 1.63%) has followed, AIG has risen a hundred-fold since its 2009 lows and has restored its dividend. Now, some expect that payout to keep rising. Let's look more closely at AIG to see whether a dividend hike is in the cards for 2016.

AIG's dividend history
It's hard to imagine now, but AIG used to be the model of stability and dividend growth in the financial world. The company never had a huge dividend yield, but it did grow its payout steadily over time. Between 2000 and 2008, AIG's quarterly dividend went from $0.037 per share (after adjusting for its 1-for-20 reverse split in 2008) all the way up to $0.22 per share, and annual increases of 10% to 20% were commonplace along the way.

The financial crisis changed all that. AIG had to take a massive bailout package, and its dividends were initially regulated by the New York branch of the Federal Reserve. In 2011, AIG had recovered substantially enough to repay its loans to the New York Fed, and that led to an end to the assistance that the central-bank branch had given the insurance giant. By 2013, AIG had gotten approval to pay its first dividend since 2008, and since then, the insurance company has increased that dividend twice, most recently last year. 2015's increase more than doubled the size of the previous dividend, reflecting the progress that AIG has made in simplifying its business and growing its bottom line. 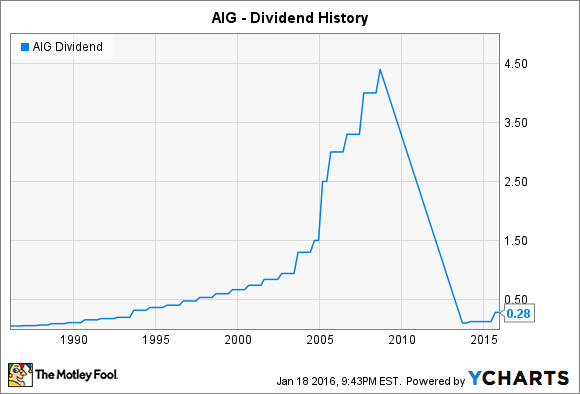 Now, many institutional investors are getting impatient with the pace of the insurance company's progress. Late last year, activist investor Carl Icahn wrote an open letter to AIG CEO Peter Hancock, arguing that the company needed to work harder to get its expenses under control. In addition, Icahn believes that AIG should break itself into two parts, one focusing solely on property and casualty insurance, and the other keeping its life and other insurance businesses. More recently, AIG has responded with promises that it will put together a plan to boost shareholder value. The breakup strategy isn't something that investors expect from most industry players such as Travelers, but with MetLife having announced a breakup plan of its own, something major from AIG could come soon.

Will AIG send its dividend higher?
AIG just gave shareholders a 124% dividend increase in September, likely responding to calls from its institutional investors to find ways to satisfy their need for value-enhancing measures. Yet the bigger question is how AIG can position itself to earn the same valuations that Travelers and other industry peers get relative to their book value. Travelers' dividend yield of 2.3% isn't that much higher than AIG's current yield, so a dividend increase isn't necessarily the key element of what it will take to satisfy shareholders.

If AIG takes more aggressive action with a breakup, then investors probably shouldn't expect a dividend increase in 2016 as the company prepares for a sea change. On the other hand, if AIG decides to maintain the status quo, appeasing shareholders with another big dividend hike might be what it takes to keep them in line.

Dan Caplinger owns shares of American International Group. The Motley Fool has no position in any of the stocks mentioned. Try any of our Foolish newsletter services free for 30 days. We Fools may not all hold the same opinions, but we all believe that considering a diverse range of insights makes us better investors. The Motley Fool has a disclosure policy.