Why the warehouse giant is likely to announce a significant hike to its payout this year.

Costco's (COST -0.48%) stock isn't likely to show up at the top of income investors' watch lists. The warehouse giant's 1% yield significantly trails peers like Wal-Mart and Target, which both pay better than 3% today.

But, unlike Wal-Mart and Target, Costco sometimes uses surprise, one-time dividends as a method to return significant sums of cash to shareholders. Include the two recent special dividends, $7 per share in 2012 and $5 per share in 2015, and its current $1.60-per-share annual payout looks quite a bit higher in practice.

Yet investors can't count on consistent surprise payouts like these (they're called "special" for a reason, after all). So, with that in mind, let's take a look at why it is very likely that Costco will increase its regular dividend in 2016.

Recent history
For the past two complete fiscal years, Costco raised its dividend by 15% and by 13%, respectively. In absolute terms, the increase amounted the exact same $0.045 per share in both years.

The retailer's operating results were quite strong in the 12 months preceding Costco's last two dividend announcements. Fiscal 2013 included a 6% increase in comparable-store sales as operating income jumped by 11% to reach $3 billion. And fiscal 2012 was even better: Comps rose 7% as operating income improved by 13%.

In its latest complete fiscal year, 2015, Costco's growth slowed slightly. Comps were up 3% over the 12 months ended on Aug. 30, as operating income spiked 13% higher. Membership renewal rates hit an all-time high of 91%, and Costco managed record sales and earnings. More recently, the company started its fiscal 2016 off with slightly weaker sales and profit gains.

Cash sources and uses
Costco's cash position is quite healthy -- both in terms of its cash balance and its ability to generate free cash flow. The retailer boasted over $6 billion of cash and equivalents on its books at last count. And its operations produce excess cash at an annual pace of about $3 billion. That gives CEO Craig Jelinek and his executive team plenty of cushion for the current dividend payout commitment of below $1 billion per year. 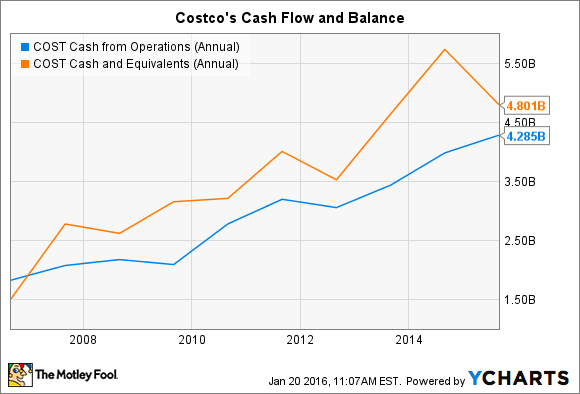 In fact, Costco's financial strength allowed it to invest $2.4 billion into its business last year while at the same time returning $3.3 billion to shareholders through dividends and stock repurchases. Investors can expect business investments to rise in the coming year -- to as much as $3 billion -- as Costco plans a record pace of warehouse openings around the world. While those aggressive plans will soak up more funds, the company isn't close to the point where it would have to pause or cut dividend payments to stay in rock-solid financial health.

So, with operating trends looking strong, and its books flush with cash, it's likely that Costco will announce a solid raise to its dividend in April, on par with what it has posted in each of the last two years. And while even another double-digit boost wouldn't push the retailer to parity with its rivals in terms of dividend yield, shareholders can take comfort in the fact that Costco's stellar membership and customer traffic trends both point to continued market-thumping growth. These operating wins might even fund another special dividend sometime in the next few years.

Demitrios Kalogeropoulos owns shares of Costco Wholesale. The Motley Fool owns shares of and recommends Costco Wholesale. Try any of our Foolish newsletter services free for 30 days. We Fools may not all hold the same opinions, but we all believe that considering a diverse range of insights makes us better investors. The Motley Fool has a disclosure policy.