Please ensure Javascript is enabled for purposes of website accessibility
Log In Help Join The Motley Fool
Free Article Join Over 1 Million Premium Members And Get More In-Depth Stock Guidance and Research
By Jay Jenkins - Jan 21, 2016 at 9:18AM

For JPMorgan and others, 2016 is going to be an interesting year.

The bank's year-to-date performance is a strong reminder that nothing is guaranteed in the stock market, even for a bank as fundamentally strong as JPMorgan. If the bank's stock continues to fall for the rest of 2016, I think it will be because of some combination of the following three factors.

Things get worse for oil and gas businesses
With crude oil prices sitting around $30 per barrel, the U.S. and global oil industry has had a tough 2015. Producers are struggling to turn a profit at these prices, which, in turn, is causing problems for the banks that finance their operations.

JPMorgan is not immune to these struggles, despite the bank's history of robust credit-risk management and balance-sheet strength. CEO Jamie Dimon specifically mentioned "some stress in energy," an innocuous statement on the surface, but telling from a banker so well known for risk management and prudence. If it's on Jamie Dimon's mind, it should be on yours, as well. 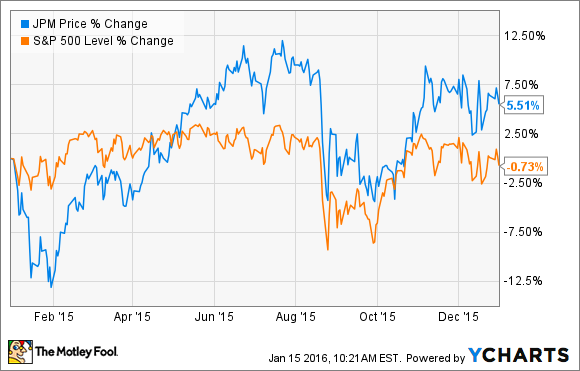 At present, JPMorgan's finances appear solidly prepared to weather the oil storm. The bank increased its credit loss reserves by about $60 million from the oil and gas commercial portfolio this quarter. For context, that's just 3.3% of the bank's commercial-banking revenue over the same period. Company wide, the bank has built balance-sheet reserves of $550 million for all oil and gas exposure in all of its divisions, including a $124 million increase in the fourth quarter.

If oil prices remain at these low levels, it's possible that losses in JPMorgan's portfolio of energy sector loans could grow to a level that impacts the company's profitability. If that were to happen, or if investors began to suspect that it might happen, expect the stock to respond in kind.

The bank's revenues disappoint
JPMorgan's stock popped after the bank released its results for the fourth quarter. Analysts were impressed with the bank's efficiency, its $5.4 billion earnings, and the bank's fortress balance sheet. The one blemish on an otherwise sparkling quarter was revenue, which was up just 1% year over year.

The expectation for 2016 will be for JPMorgan to grow revenues much more than just 1%. If the bank can't do that, expect the stock to suffer.

In December, the Federal Reserve raised interest rates for the first time since 2006 as it continued the process of ending the easy money monetary policy used to combat the financial crisis and its aftermath. A rising-rate environment is a welcome change for banks, as higher rates serve to both increase their revenues and their profits.

Banks earn a large portion of their income by collecting deposits from customers, and then investing that money out at a higher rate in loans and bonds. In higher interest-rate environments, banks are able to charge higher rates on their loans, and receive higher yields on their bonds. That raises the top line. Simultaneously, they are able to increase their margins by raising deposit and funding rates more slowly than they raise loan rates. 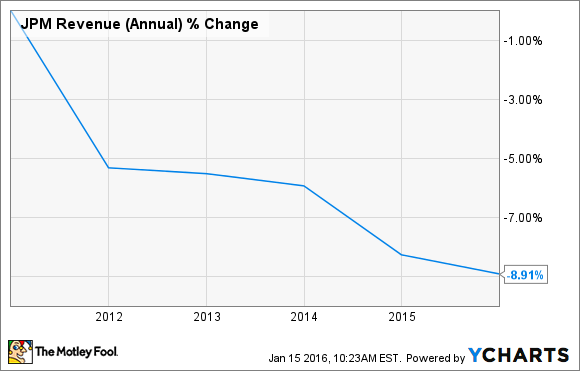 Investors in 2016 will no longer be satisfied by efficiency and cost cuts alone. Banks will have to find ways to increase revenue, whether the Fed continues to raise rates, or not.

The Fed doesn't raise rates as fast as the markets think (or worse, if it reverses course)
In August and September, global economic problems stemming from China forced the Fed to delay its decision to raise its benchmark interest rates. With similar problems currently roiling markets again, its not unreasonable to think that the Fed may slow its plans to raise rates. While improbable, it's not altogether impossible for the Fed to outright reverse the change, either.

The worst-case scenario is that the problems in China lead to a recession in the U.S., globally, or both. In that event, the Fed would likely have to resume its easy money policies to stimulate growth and protect the labor market. Most analysts attribute JPMorgan's slide thus far in 2016 to this exact concern.

For banks like JPMorgan Chase, lower interest rates would be a major headwind to revenues and margins. In other words, if for any reason the Fed doesn't continue to raise rates as expected, both the top and bottom line at JPMorgan could disappoint investors, and send the stock lower. In my view, an economic slowdown starting in China is the most likely cause for the Fed to change its plans.

Ready or not, 2016 is here
In many ways, 2015 was a year in which banks made their final preparations for what could be a historic year. By and large, the legal and regulatory costs of the financial crisis are over.

The Fed has started its process of raising interest rates. Bank balance sheets are as strong as they've been in memory. Their organizations are as lean as they can possibly be.

In 2016, all of the narratives of the past eight years are poised to shift. Bank performance in 2016 will be defined by the next phase of the economic cycle. Does that mean major successes, growth, and big market gains? Or does it mean a recession, losses, and volatility?

No one knows, but we all will soon find out.