Please ensure Javascript is enabled for purposes of website accessibility
Log In Help Join The Motley Fool
Free Article Join Over 1 Million Premium Members And Get More In-Depth Stock Guidance and Research
By Brian Stoffel, Tim Beyers, and Joe Tenebruso - Jan 21, 2016 at 8:38AM

Let the market swoon work in your long-term favor with these three stocks.

Our contributors have a bullish outlook on these three stocks. Photo: Sam valadi, via Flickr.

It's been a rough start to 2016 for investors. With the S&P 500 down over 10% from late December highs, we're getting a serious gut check to begin the year. But the recent swoon has also created some enticing opportunities.

Tim Beyers (GoPro): I know what you're thinking: "How can you recommend GoPro now? Didn't the company just report disappointing sales guidance and a massive layoff?" Yes, and yes.

Investors rightly expect corrective action. Layoffs are part of that, as is an announced plan to move Zander Lurie to the board. Previously, he was senior vice president of GoPro Entertainment, charged with helping monetize content captured with GoPro equipment. He's also leaving day-to-day duties at GoPro to take the CEO job at SurveyMonkey.

Ocean McAdams, previously of cable networks MSG and Current TV, steps into the void left by Lurie's departure. How she'll improve operations in the division isn't yet clear, though a GoPro spokesperson told Variety to expect "branded partnerships and content partnerships," among other initiatives. Let's hope things turn around: Investors can't afford another year in which GoPro launches a supposedly acclaimed camera -- the HERO4 Session, in this case -- only to cut prices repeatedly in order to move product.

In the meantime, it's worth noting that at an enterprise value of just $1.2 billion, GoPro trades for less than the revenue. At that price, any meaningful progress in the business could send the stock soaring.

Brian Stoffel (Yandex): I won't blame you for thinking that I'm crazy to suggest that Russia's largest search engine, Yandex, could soar in the year ahead. After all, there are a lot of dark clouds hanging over the company: the threat of intervention by Vladamir Putin's government, falling oil prices, intentional tensions, and -- of course, competition from Alphabet (GOOG 2.68%) (GOOGL 2.63%).

But it's because of all that pessimism that I think Yandex has the ability to pop in 2016. Even during all of the turmoil of 2015, the company was able to increase revenue 15% to nearly 42 billion rubles -- on a constant-currency basis. That's a remarkable feat, all things considered.

Oil prices will rise and fall, the Russian economy will evolve, and Putin won't be in power forever (I think). The long-term investor's biggest concern should be Google, which has been winning an increasing share of the Russian search market. The main reason is that the company's search app is automatically installed on most Android phones used in Russia.

That led Yandex to file an antitrust suit that Russian courts agreed with in September. Alphabet is contesting the ruling, but if it loses, it would have to remove the search app from pre-bought Android phones sold in Russia. That could help Yandex once again climb above 60% market share, and even expand its reach in other former-bloc countries.

Joe Tenebruso (Facebook): Back in December 2014, I identified Facebook (META 5.82%) as a tech stock that could soar in 2015. After a more than 30% rise in stock price, that call has proved to be prescient. 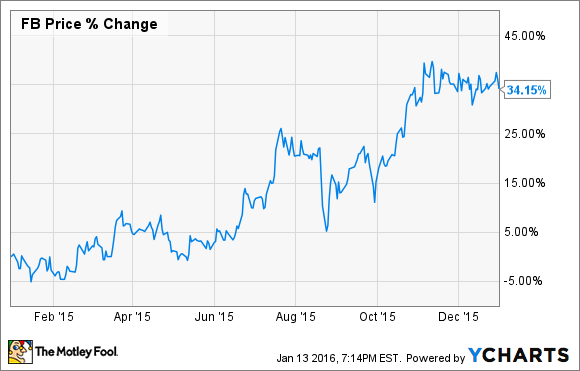 More importantly for today's investor, however, is that Facebook appears poised for even more gains in the year -- and years -- ahead.

Perhaps more than any other company, Facebook is benefiting from the global shift in advertising dollars from traditional media (such as television, print, and radio) to the Internet. Billions of adverting dollars are migrating to social media, where companies are scrambling to reach audiences on mobile devices, particularly via digital video -- two areas where Facebook is growing increasingly dominant.

But rather than sitting back and enjoying this rising tide, Facebook is aggressively moving into other emerging areas such as virtual reality. Its $2 billion acquisition of leading VR technology company Oculus should soon begin to bear fruit, with Facebook now taking pre-orders for its new Rift virtual reality headset. And with recent reports now projecting that the virtual reality market may far exceed earlier estimates in both size and scope, Oculus may become a significant driver of Facebook's growth much sooner than many investors currently expect.

As such, with the social media titan rapidly advancing its beachheads in mobile, digital video, and virtual reality, Facebook once again looks like a tech stock set to soar in 2016 -- and beyond.