Top stock picks for dividend investors to buy during the market sell-off.

The stock market is off to its worst start ever in a new year, but that doesn't mean dividend investors should avoid investing in companies with staying power for the long haul. In fact, the recent sell-off could mean that dividend yields are more attractive today than they've been in a long time, and that may make this a perfect time to consider investing in top-shelf dividend companies, including these five that some of our top Motley Fool contributors have hand-picked.

Todd Campbell: The expected FDA approval of Merck & Co.'s new hepatitis C therapy could force Gilead Sciences (GILD 1.84%) shares lower this month, and if so, investors might want to step up and buy shares in Gilead Sciences ahead of its fourth-quarter earnings release later this month.

The lion's share of Gilead Sciences' revenue comes from its hepatitis C drugs, and despite facing off against AbbVie Inc.'s Viekira Pak last year, the company's HCV footprint has only gotten bigger.

Gilead Sciences has beaten Wall Street earnings estimates and boosted its full-year sales outlook in each of the first three quarters of 2015, and because safety concerns emerged for Viekira Pak in September, it wouldn't shock me if Q4 was similarly kind to the company and its investors. If so, then management should have plenty of financial flexibility to boost Gilead Sciences' dividend payout.

Although Merck's new therapy could crimp some of Gilead Sciences' top line this year, Gilead Sciences has a history of successfully outmaneuvering competitors, and given that its shares are trading at less than 9 times 2016 EPS and its dividend could increase soon, it may be a good time to be a buyer.

Daniel Miller: I'm surely not the only person to have felt some portfolio pain over the past six months. Because of economic uncertainty overseas -- I'm looking at you, China -- investors might want to find some stocks that are proven performers in their industry. One such stock that has made my short list is Canadian National Railway Co. (CNI 2.04%).

Weakness in commodities such as coal, grain, and oil caused Canadian National Railway's gross-ton miles, which is basically a measure of volume carried, to fall 5% in the third quarter. However, that's one reason investors should take a hard look at the company, because it's easily the most efficient railway in the industry and still managed to record a best-ever 53.8% operating ratio.

During the third quarter, CN managed to increase its train productivity 2%, decreased its terminal dwell by 11%, and improved its car velocity by 10%, all compared with the third quarter of 2014. CN is a well-oiled machine when it comes to operating efficiently, and while railroads in general generate a lot of cash, CN continues to be an industry leader in printing money.

Lastly, CN offers investors a fine-tuned business that's protected by its cost advantages driven by its previously mentioned efficiency. Sure, the trucking industry, ships, and even aircraft can haul freight, but rarely can those options match the low-cost railroad. 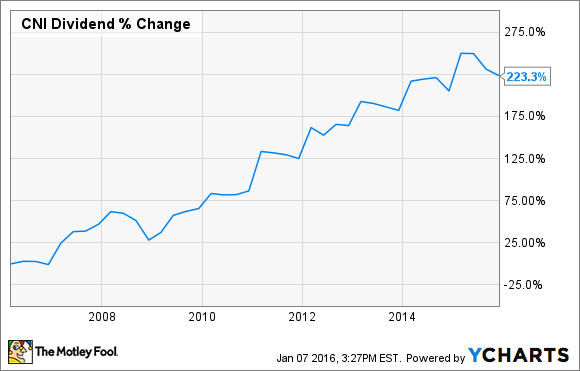 While the global recovery seems a bit rocky to start off the new year, smart money will find its way to companies similar to CN, which provide a cost advantage, print money, and boast improving operations in the face of challenges such as weaker shipping volume. On top of all that, CN dished out a 25% dividend increase in 2015 and has a history of consistent dividend raises.

Matt DiLallo: With a distribution yield of 6%, Enterprise Products Partners (EPD 1.11%) certainly has an eye-catching yield. While normally a yield that high would be a sign of trouble, that's not the case with Enterprise Products Partners. In fact, the company recently announced plans to steadily increase its distribution over the course of 2016, leading to a 5.2% increase over what it paid investors last year.

The company has the ability to grow its payout in the currently tumultuous market because it has five key ingredients that largely insulate it from the troubles that have befallen some of its peers:

These five factors combine to make Enterprise Products Partners one of the strongest MLPs. With a rock-solid distribution that's expected to continue growing in 2016, it's a great income stock to buy this month.

Andres Cardenal: Global stock markets are off to a rough start in 2016, but that's no reason to stay away from a solid and dependable dividend powerhouse such as Coca-Cola (KO 0.95%).

The soft-drinks giant has proved its ability to deliver consistently growing dividends through good and bad economic times, Coca-Cola has increased its dividend every year over the past 53, including a generous 8% dividend boost for 2015. Coca-Cola stock is paying a respectable 3.1% yield at current prices.

This extraordinary track record of dividend growth is based on rock-solid competitive strengths. Coca-Cola owns an impressive portfolio of 20 different brands making over $1 billion each in global annual revenue. Marketing firepower and a gigantic global distribution network provide additional layers of competitive strength.

Soda consumption in developed markets is declining because of health considerations, and currency depreciation in emerging markets is hurting financial performance in those markets. However, Coca-Cola is finding promising growth venues in its portfolio of healthier drinks, including waters, sports drinks, juices, and teas. Since 2010, Coca-Cola's portfolio of still products has delivered a compounded annual growth rate of 5% per year.

Times are changing, but Coca-Cola has the competitive strength and financial resources to adapt to changing consumer demand. That means the company will most likely continue delivering growing dividends for investors for years to come.

Tyler Crowe: One stock that looks like a compelling pick in January is refined petroleum product transporter Magellan Midstream Partners (MMP 1.03%). The past few months have been a pretty unsavory time to own master limited partnerships, as investors are pulling out of the sector because other companies in the space are looking a bit shaky in today's oil market. That environment has sent sent shares of Magellan down close to 20% over the past year.

However, most of the reasons so many other pipeline companies have sputtered don't really apply to Magellan. Its management team is one of the more conservative groups in the space, focusing more on the long-term viability of the business. Unlike others that are susceptible to declining oil and gas production, a majority of Magellan's assets are dedicated to the transport of refined petroleum products such as gasoline and diesel. These products are less likely to see volumes increase and decrease as drastically over time, so rarely does Magellan need to worry about declining volumes in its pipes and storage tanks.

Also, unlike many of its peers, Magellan's management has take a much more measured approach to how it grows both the business and its payout to unitholders. Based on the company's results over the past several quarters, it appears that the downturn in oil and gas prices isn't having much of an impact on the company's ability to generate cash.

It's not the sexiest time to be investing in the energy sector, but at today's prices, Magellan Midstream Partners looks like a great buying opportunity.