Please ensure Javascript is enabled for purposes of website accessibility
Log In Help Join The Motley Fool
Free Article Join Over 1 Million Premium Members And Get More In-Depth Stock Guidance and Research
By Timothy Green - Jan 21, 2016 at 11:55AM

No specific news drove the gains, but uncertainty surrounding the company has led to an extremely volatile stock.

What: Shares of Advanced Micro Devices (AMD 2.76%) soared on Thursday, two days after reporting mixed fourth-quarter results and providing disappointing guidance for the first quarter. While there was no specific news driving the rise in AMD shares, the jump is a continuation of the volatility that has gripped the stock over the past year. As of 11:30 a.m. ET, shares were up about 16%. 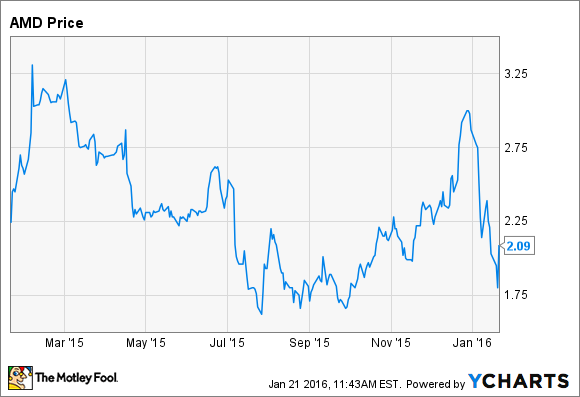 So what: AMD had a difficult 2015, with revenue and profits plunging due to market-share losses and a weak PC market. The company issued optimistic guidance for the second half of 2015 in May, but the stock plunged once it became clear that the company's results would fall far short. Toward the end of 2015, the stock nearly doubled in just a few months for no apparent reason, only to collapse in the new year.

AMD stock sank following the company's fourth-quarter earnings report on Jan. 19. The company's results were mostly in line with expectations, but guidance calling for a larger-than-expected revenue decline during the first quarter gave investors pause. AMD does expect to grow revenue in 2016 while returning to non-GAAP profitability, but the stock sold off regardless. The rise on Thursday, which more than made up for the post-earnings drop, could simply be a reaction to the stock having dropped so quickly. Prior to Thursday's gains, shares of AMD were down nearly 40% year to date.

Now what: The volatility in AMD's stock price reflects the uncertainty surrounding the company. AMD has posted a non-GAAP loss for four quarters in a row, and while new GPUs and CPUs are expected this year, the company's results are unlikely to improve until these new products are released. Even then, AMD's track record is far from stellar, with the company having a history of over-promising and under-delivering.

Investors shouldn't pay much attention to these volatile swings. Instead, the fundamentals and the long-term prospects of the company should be what determines whether AMD deserves an investment. While there's no guarantee that AMD's turnaround efforts will succeed, the stock will likely remain volatile in 2016.