The stock finally has a strong day after the drugmaker announces the FDA clearance of two IND applications for its immuno-oncology platform.

What: Shares of the small-cap immunotherapy company Agenus (AGEN 11.24%) woke up from their winter hibernation today, gaining more than 24% in early trading on heavy volume. The spark behind this sudden upward move was the news that the U.S. Food and Drug Administration cleared the company's investigational new drug (IND) applications for AGEN1884 and INCAGN1876.

AGEN1884 is an immune checkpoint modulator antibody that binds to cytotoxic T-lymphocyte antigen-4 (CTLA-4), and is being developed directly by Agenus. INCAGN1876, on the other hand, is another checkpoint modulator antibody targeting the glucocorticoid-induced TNFR-related protein (GITR), and is being co-developed with Incyte (INCY 0.31%) as part of the two companies' global partnership in immuno-oncology.

So what: Agenus' share price has been in an absolute tailspin over the past six months because investors have seemingly lost their patience with the company's progress on the immuno-oncology front. According to data provided by S&P Capital IQ, for instance, the company's shares are currently down by over 62% from their 52-week highs -- even after today's surge upwards: 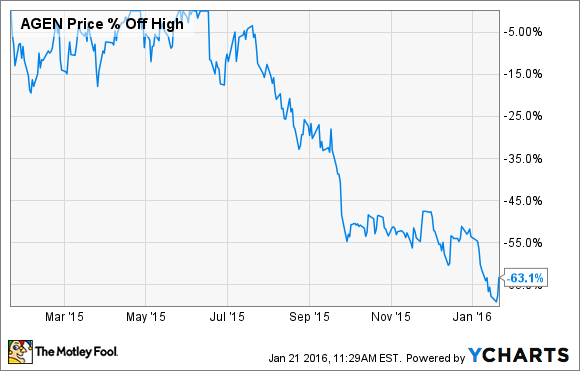 So, it's not entirely surprisingly that the company's stock is starting to rebound following this long-awaited clinical update.

Now what: Agenus said in its press release that clinical trials for both compounds should begin in the first half of this year. Perhaps more important, though, the company expects to announce additional IND approvals for its broad immuno-oncology platform in the coming months.

Looking ahead, Agenus may be able start receiving some much-needed cash from its deal with Incyte over the course of the year. After all, Agenus is reportedly eligible for up to $350 million in milestone payments under the terms of its global immuno-oncology partnership with Incyte.

All told, Agenus is finally making strides toward catching up with its numerous peers in the red-hot field of immuno-oncology. I'm thus cautiously optimistic that the company's shares will start to recapture at least some of their former glory, making this speculative small-cap stock worth a closer look from seasoned biotech investors.