The game publisher's stock almost doubled last year, but still has room to outperform indexes by a wide margin.

Activision Blizzard's (ATVI 0.52%) best operating year to date was 2012, when everything seemed be going the video-game publisher's way. Its cash cow World of Warcraft title boasted 10 million paying subscribers that year. And fresh installments in the Call of Duty, Skylanders, and Diablo franchises all enjoyed record launches as the prior-generation of consoles peaked in popularity.

Then came the transition to next-gen video game consoles, which hurt software spending as gamers dedicated most of their budgets to buying expensive hardware. At the same time, Warcraft started showing its age as the subscriber base fell with each passing quarter. As a result, Activision has yet to eclipse the $4.9 billion in sales -- and $1.1 billion of net income -- that it booked in fiscal 2012. 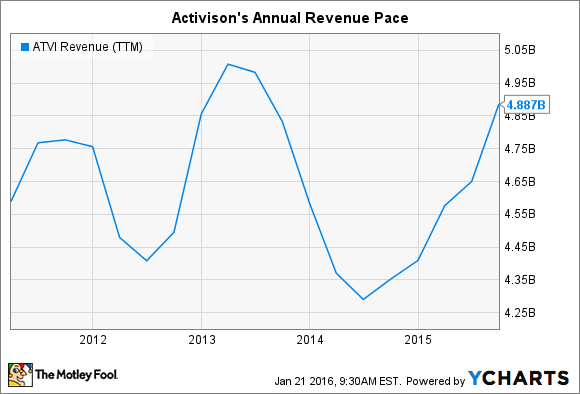 But that could all change this year.

Let's get engaged
Start with the fact that the video-game publisher is seeing record engagement across its brands. In fact, Activision fans recently logged over one billion hours of gameplay per month within its major franchises, up 25% over the year-ago period. And that number doesn't even include the huge chunk of time that people are spending watching its games on streaming services like Twitch and YouTube.

The big shift here is that Activision is transitioning from a launch-based model, where most of the gameplay comes in the few weeks following release, to a year-round engagement model – where expansion packs and other downloadable content keep the title productive for a year or longer. Not only does this switch generate higher overall profits, but it also makes for steadier, more predictable revenue streams. In short, video games are becoming more valuable properties.

More games than you can count
Activision is also heading into 2016 with its deepest gaming portfolio -- by far. As recently as 2014, the company depended on just three brands -- Call of Duty, World of Warcraft, and Skylanders -- for nearly 80% of its profits. But that huge concentration risk is disappearing.

Last summer the Blizzard side of the business for the first time generated the majority of its sales from titles other than Warcraft. Diablo, Hearthstone, and Heroes of the Storm all picked up the slack from that game's weakness.

Destiny is one of the five new AAA franchises Activision has introduced since 2014. Image source: Activision.

And with additional help from Destiny, Activision likely ended 2015 with 10 triple-A franchises in its portfolio, up from just five at the beginning of the prior year. And don't forget about King Digital (KING.DL) mobile blockbusters like Candy Crush, which will belong to Activision after the acquisition closes this year.

Downloading profits
Yet even if it doesn't beat its $4.8 billion sales tally from 2012, Activision's earnings haul could set a new record thanks to surging digital sales, and the rising profitability that they bring. Digital revenue spiked 50% higher in the third quarter and reached a record 64% of the publisher's business.

The boost helped operating margin jump to 24% of sales from 22% in Q3. Activision is beating rival Electronic Arts (EA -1.09%) on this metric, even if both companies are seeing digital sales help their bottom lines. EA's operating margin rose to 19% last quarter, yet still trails Activision's on a trailing-12-month basis. 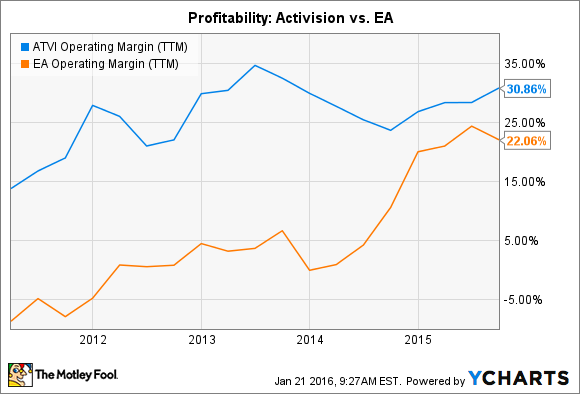 Much of the above optimism is already reflected in these publishers' share prices. Activision was one of the market's best-performing stocks last year, up 94%. And EA's 46% gain trounced the indexes as well. Yet Activision is still valued at a slight discount to its major competitor: Its P/E ratio of 23 compares well to EA's 27.

Neither valuation seems cheap, but Activision has several avenues by which it could outperform Wall Street's expectations this year. That's why I think investors who like proven industry leaders with growing market opportunities should add this stock to their watchlist ahead of what's likely to be a record year for the publisher.