Please ensure Javascript is enabled for purposes of website accessibility
Log In Help Join The Motley Fool
Free Article Join Over 1 Million Premium Members And Get More In-Depth Stock Guidance and Research
By Daniel B. Kline - Jan 22, 2016 at 11:11AM

The company is making it possible for people to buy with a single button press, and even letting devices purchase their own supplies.

Amazon (AMZN -1.13%) wants to make its shopping experience so easy that it removes any possibility consumers will go anywhere else.

That's very bad news for its chief rival, Wal-Mart (WMT 0.99%), which is struggling to catch up in the digital realm and remains many steps behind. While its competitors struggle to improve their websites, grow their mobile offerings, and build delivery infrastructure, Amazon already has everything in place, including the ability to deliver in two days all over the United States, even offering Sunday delivery in many markets.

Amazon has essentially lapped the competition but knows it will eventually catch up. To keep its lead while forcing Wal-Mart and other physical retailers to continue to spend away from their core competency areas, the online leader has begun to change the game. The company has created a number of ways people can buy from Amazon.com without even visiting its website or mobile app.

If these methods catch on, that's very bad news for Wal-Mart, because it will lose the opportunity to compete.

Dash buttons make reordering easy
Amazon has begun offering its customers DASH Buttons -- Wi-Fi connected buttons that let people reorder just by pressing it. For example, one might get installed next to your washing machine, and when you see your detergent supply running low, you hit it, and a pre-selected amount of the item is ordered and shipped.

It's all controlled via the Amazon app, and a confirmation is sent to your phone, allowing time to cancel.The Dash Buttons also have order protections built in that prevent users from placing a second order before the first one has shipped unless the user has specifically allowed for multiple orders in his or her settings.

Most of the Dash buttons are tied to items that generally get used by consumers -- things like detergent, razor blades, food, and baby products. It's a simple, elegant solution that makes it easy to keep from running out of key items without having to go to the store.

You can order via Echo
Though it started as a voice-addressable wireless speaker, Amazon's Echo is ultimately meant to be the hub of your automated home. Those features are still developing, but the sleek device can be used to control lights, thermostats, and more, with a lot more coming from third-party developers.

Since Echo was made widely available, it has allowed users to add to their Amazon shopping lists by addressing the device. Ultimately, it should be as seamless an experience as using a Dash button, but for now, it's a bit rougher. 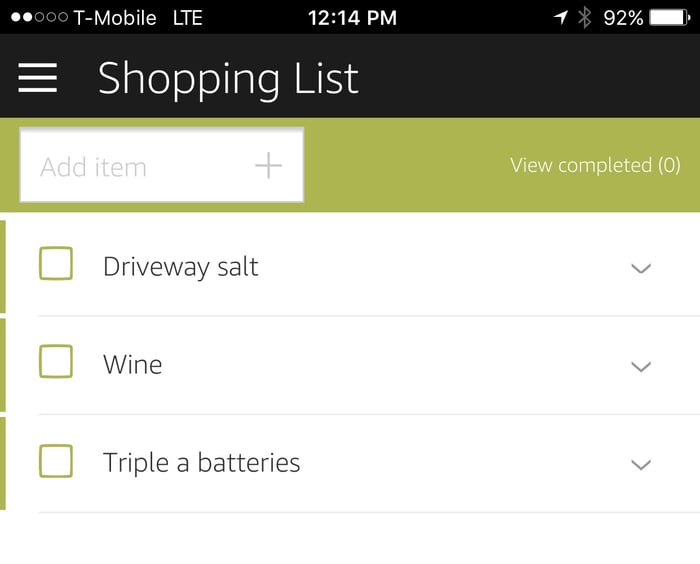 My Echo shopping list was thrown together with the coming storm in mind.

In many cases, a voice command to "buy driveway salt" simply adds that item to a shopping list in the Alexa app (which controls Echo). Users then have to make another click or two to find the right item before placing an order. Still, because Echo can be verbally addressed, it works well as a shopping compiler.

Mine lives in my kitchen, and if I'm running out of aluminum foil or garlic powder, Echo makes it easy to add them to my Amazon shopping lists. It's still sort of a clunky process, but Amazon has improved the Echo steadily since its launch, and there is every reason to believe it will continue to do so.

Like Dash, Echo takes stores out of the equation. In theory, you could use the generated shopping list to go to Wal-Mart or another retailer, but why would you when a few clicks has the items on their way?

With DASH buttons, products that order for themselves, Echo, and more, Amazon is making it really easy to shop, which cuts its competition off at the knees.

No person necessary
Both the Dash button and Echo take at least some level of human involvement. A third program from the online retailer, Dash Replenishment Service (DRS), actually lets certain WiFi-connected devices order their own supplies.

The retailer lets its partners integrate DRS in two ways. They can add a Dash-like button that consumers hit to place an order, or they can "measure consumable usage so that reordering happens automatically."

That's the real beauty of the system since it takes all of the guess work out and keeps consumers stocked with items they need. That should bring orders to Amazon, and it might make consumers actually use more of the item in question. If people run out of printer paper, they don't consume any while they wait to get more. If more just shows up, usage could increase.

This is bad for Wal-Mart
All three of these offers make shopping with Amazon either more convenient, or so easy consumers literally don't need to do anything. That's very hard to compete with, and Wal-Mart doesn't yet have any similar products. That's bad news for the physical retailer, because once Amazon has Dash, Echo, or DRS installed in people's homes, getting them to switch to something other than Amazon products becomes much harder than getting them to sign up in the first place.

Daniel Kline has no position in any stocks mentioned. He uses his Echo, but thinks Dash buttons are a little much. The Motley Fool owns shares of and recommends Amazon.com. Try any of our Foolish newsletter services free for 30 days. We Fools may not all hold the same opinions, but we all believe that considering a diverse range of insights makes us better investors. The Motley Fool has a disclosure policy.