Please ensure Javascript is enabled for purposes of website accessibility
Log In Help Join The Motley Fool
Free Article Join Over 1 Million Premium Members And Get More In-Depth Stock Guidance and Research
By Adam Levine-Weinberg - Jan 22, 2016 at 8:47AM

Best Buy has taken investors on a roller-coaster ride in the last five years -- and it's not likely to end soon.

Investors betting on a turnaround at consumer electronics giant Best Buy (BBY 2.92%) have endured a lot of ups and downs in the past few years. Every big rally has been followed by a heartbreaking slump. 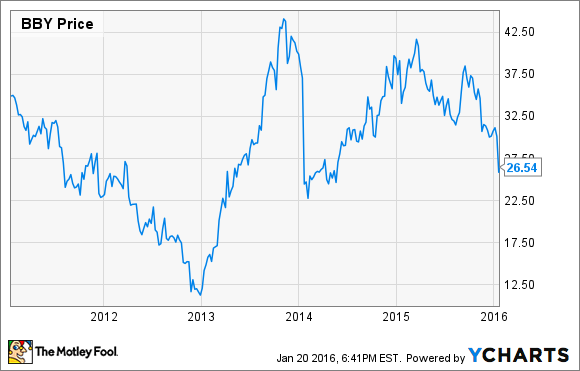 Best Buy's recently released holiday update shows that the company's turnaround progress remains shaky. On the one hand, it has managed to stabilize its earnings by slashing costs and taking market share from weaker competitors.

On the other hand, consumer interest in the product categories it carries appears to be quite volatile. Best Buy's sales results are overly dependent on product cycles at tech companies like Apple (AAPL -0.26%), as well as other factors outside of management's control.

Holiday sales disappoint
In November, Best Buy forecasted that fourth-quarter revenue would be roughly flat in the U.S., while its adjusted operating margin would decline by 20 basis points to 35 basis points year over year due to a variety of factors. Meanwhile, international revenue was expected to plunge 30% due to store closures and economic weakness in Canada, with a 2%-3% operating margin.

In its holiday update issued last week, Best Buy maintained its forecast for the international segment. But within the U.S., sales missed expectations.

During the first nine weeks of Q4, domestic comparable-store sales fell 1.2% year over year. As a result, Best Buy now expects domestic revenue to decline about 1.5% for the quarter, compared to its previous guidance for flat revenue.

A year ago, Apple's iPhone 6 and iPhone 6 Plus were taking the world by storm. However, Apple is seeing slower sales for its flagship phones in the U.S. now, as many iPhone users just upgraded a year ago. Best Buy doesn't seem capable of doing anything to insulate itself from consumer trends like this.

On the flip side, Best Buy has benefited immensely in the past few years from strong appliance demand. Home-improvement spending has soared in the past few years along with home values and broader economic growth. In Q3, domestic comp sales rose 16.4% in the appliances category, and this double-digit growth continued in the first two months of Q4.

Too much risk for the potential reward
Best Buy shares look quite cheap right now. The stock trades for roughly 10 times forward earnings. Furthermore, Best Buy has about $6 in net cash on its balance sheet that it could use for higher dividends or share buybacks.

Additionally, Apple is expected to release the iPhone 7 this fall, which could lead to another strong upgrade cycle and a rebound in sales. A new 9.7" iPad could be coming even sooner, giving Best Buy a shot in the arm this spring.

However, these positives are outweighed by the reality that these sales gains could be fleeting. Given the maturity of the U.S. smartphone and tablet markets, every strong Apple product cycle is likely to be followed by a downturn the following year. Also, profit margins on Apple device sales are notoriously thin.

In short, Best Buy's sales and earnings appear to depend heavily on volatile factors outside of management's control. That's not a good situation for investors. There are better opportunities than Best Buy both inside and outside of the retail industry.