Starting with Indonesia and Kenya, the streaming-video provider is running into censorship on a level it has never seen before.

Netflix (NFLX 0.22%) recently added 130 new territories to its global service footprint. The streaming-video service now covers every country allowed by American embargo policies, except for the politically difficult Chinese market. This week, Netflix started running into some not-terribly-surprising political resistance in some additional regions, including Kenya and Indonesia.

Is the sudden expansion falling apart? I don't think so. Some fallout should simply be expected, and Netflix is likely to sort out its differences with most countries in the end. These early issues, and the Indonesian situation, in particular, serve as useful testing grounds for the entire campaign.

What's the problem?
The national censorship board of Indonesia is calling on the government to block Netflix services. The Indonesian catalog allegedly includes a few titles that the censoring body had blocked from showing in local theaters, and Netflix has apparently not filed for all of the appropriate licenses and permissions needed.

"We reminded [Netflix that] if they don't want to apply for licenses, then don't enter [Indonesia]," said Indonesian censor body Chairman Yani Basuki, according to a report in local news outlet Tempo .

The Kenyan challenge is not very different from the Indonesian issue. Local news site Standard Digital reports that content regulators had a look at the Netflix catalog, quickly deciding that this stuff would be bad for the people of Kenya. The country does not yet have any specific laws to govern Internet-based video services, but censorship still applies in any medium.

"This is great contravention of laws governing film and broadcast content distribution in Kenya, which has put at risk our moral values and national security," Kenya Film Classification Board hairman Jackson Kosgei reportedly said. "The medium of transmission notwithstanding, all content whether local or foreign, must be regulated."

The specific issues are always the same: "Some of the content rated 13 presents classifiable elements of nudity, promotion of irresponsible sexual behavior, inappropriate language and drug abuse," Kosgei said.

Why here? Why now?
I'm sure that more countries will raise similar concerns in the coming weeks and months, and that Netflix must have prepared for this unavoidable challenge.

Yes, Kenya and Indonesia are huge in many ways. Kenya holds 44 million citizens, and Indonesia is home to 250 million people. In fact, Indonesia boasts the fourth-largest population on the planet, trailing only China, India, and the United States.

Netflix decided to start slowly in these territories. According to an ambitious report from Finder.com counting the titles in 184 different Netflix markets, both Indonesia and Kenya rank among the 25 smallest launch catalogs.

With less than 200 TV shows and only 463 movies to consider, the Kenyan censors could make fairly short work of their initial review. Indonesian content raters had even less material to handle.

The censorship bodies in Tanzania and Iraq reportedly have about twice as many TV series to wade through, besides rating nearly 2,000 movies. Simply put, the Kenyan and Indonesian censors could issue comprehensive warnings very quickly because there wasn't much work to do. Other nations may have even more-restrictive rules and tougher enforcement to boot, but they probably haven't gotten around to Pulp Fiction and Sense8 yet.

How Netflix will handle Kenya and Indonesia
I fully expect Netflix to fight back and/or adjust to the local regulations in Indonesia. In fact, this is a must-win battle.

According to a Worldbank report from 2013, Indonesia is among the most difficult places on earth to do business. So Netflix should not be surprised to see an immediate government pushback.

At the same time, only 15% of Indonesian households have access to landline broadband connections, and 12% have smartphone broadband services at the very low end of what you'd call "broadband." But according to the same Cisco Systems (CSCO -0.14%) research that shows these disappointingly low broadband penetration figures, 71% of the same 250 million citizens should have at least 20-megabit landlines by 2019. Mobile broadband should reach 52% of Indonesians at that point.

If those predictions are in the right ballpark -- and I see no reason to disagree, given the rapid strengthening of Indonesia's economy -- then Netflix would be silly to leave that market unexplored. In just a few years, it will be obvious to everyone that Indonesia is a valuable market for network-intensive Internet products. The time to build a presence and start acquiring mind share is now. 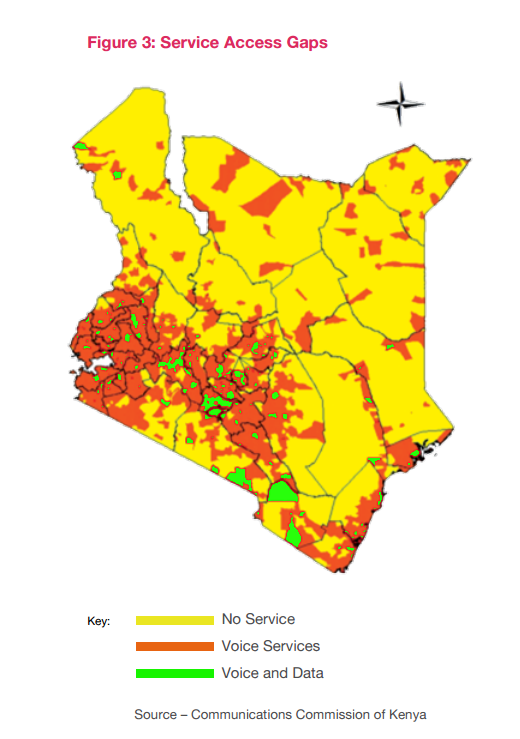 Reliable broadband connections are hard to come by in Kenya.

Kenya should be a lower priority, but it still isn't a market to be ignored. The sixth-largest nation in Africa, Kenya is also sharply divided between an affluent minority and a struggling general population. According to Cisco's studies, these are very early days of broadband access in this country, and Netflix-style services will play to a very small audience in Kenya for years to come.

The Kenyan government does plan to provide 5-megabit broadband to the entire nation -- but that's the endcap to a very long-term plan known as "Vision 2030." Kenya currently has less than 1 million broadband households, 95% of them relying on mobile connections. Sure, it never hurts to get started early, but Kenya won't be a significant broadband market anytime soon.

How Netflix can win in Jakarta
What can Netflix do to stay involved in problematic markets like Indonesia? The first step would be to secure a ton of properly redacted material.

For Netflix original shows, this won't be hard. Set the editing crews to "inoffensive," and let them loose on the content that already belongs to Netflix.

It's true that Sense8 would make very little sense -- no pun intended -- without its psychedelic and sexual references. Narcos without violence? Just show a TV test pattern throughout the entire season, why don't you. But this loss of quality has not stopped censors from taking their hacksaws to all kinds of material around the world, and a crippled Daredevil is still better than none at all.

Third-party shows and films would be trickier, and might require a few amended license agreements. Some studios might prefer to back away from this potential PR firestorm, even if they get a smaller annual check from Netflix's licensing department. But others would be happy to provide redacted versions, or at least let Netflix do its own censorship work.

Meanwhile, Netflix must send negotiators, international law experts, and high-ranking company executives to talk to the Indonesians. If there's paperwork to do, then get it done. Show them how hard you're working on a catalog that conforms to local standards of morality, and promise to keep future titles on a short leash.

The end result would be a collection of de-fanged content, scrubbed chemically clean of materials offensive to Indonesian consumers (or more correctly, to Indonesian censors). This sub-catalog could then be put to good use in other territories with similar issues, like most of the Middle East, and many Asian countries with iron-fisted governments.

What's next?
Netflix is new to these particular issues, because its earlier territories in Western Europe, Southeast Asia, Australia, and the Americas generally don't impose strict censorship on media. But here we go, and Netflix must adapt or fail.

Making it work in Indonesia should be well worth the effort as the local economy grows and modernizes. A scrubbed content collection created as a side effect should prove useful in many other markets, and could even be the silver bullet that someday lets Netflix enter China.

Kenya will happen, if only as a logical extension of that Indonesian content cleanup. But don't expect CEO Reed Hastings to take a plane to Nairobi over this early challenge. He's much more urgently needed in Jakarta, after all.