Please ensure Javascript is enabled for purposes of website accessibility
Log In Help Join The Motley Fool
Free Article Join Over 1 Million Premium Members And Get More In-Depth Stock Guidance and Research
By Brian Stoffel - Jan 22, 2016 at 8:36AM

Think long and hard about where you'd put your money. Photo: Andreas Eldh, via Flickr.

Imagine you have to invest all of your life's savings, but can only choose to do it in one stock. What would you buy?

The conservative folks would likely opt for a steady, dividend-paying stalwart like a utility or conglomerate that doesn't show much promise for innovation in the future. Those who like to live on the edge could opt for a high-flying momentum stock; but all too often, those stocks burn out and cost you the majority of your investment.

But what if I told you that it was possible to buy a stalwart, and still retain the possibility to rake in huge gains because of the potential for game-changing technologies? And I'm not talking about some type of breakthrough that could quickly be commoditized.

The company that has all that promise is Alphabet (GOOG -0.52%) (GOOGL -0.60%), better known as the parent company of Google. The company has all six traits that I consider crucial to unlocking long-term potential for investors (with a nod to Nassim Taleb's book Antifragile, which provided the framework). Read below to find out about all six.

In Alphabet, investors get massive competitive advantages. For starters, Google has the #1 most popular website in the world, according to alexa.com (for those keeping track, it also owns the third most popular site in the world: YouTube.com). It has gobbled up a ridiculous 89% of the global search market share according to Statista -- even with a minuscule presence in China, the world's most populous nation. And because of the ubiquity of the Android operating platform, Google continues to be a force on mobile devices as well.

Microsoft (MSFT -0.71%) has tried to make a dent in this market share, but currently only has 4% of the global market. And even though Baidu (BIDU -3.98%) has recently solidified its position in China's mobile search landscape, the outfit from the Middle Kingdom has captured less than 1% of the global market. (Both statistics come from Statista and were updated last October.)

All of this translates into superior information, allowing Google to offer up online advertising that is the most efficient at hitting a target audience. That brand power and information edge shouldn't be taken lightly. As Charlie Munger once put it, Google has one of the widest moats he's ever seen.

2. Optionality
This is defined as a situation where a company can attempt to pursue a game-changing product, but can afford to have it fail, having the option to discontinue it. When a company has enough money on hand (more on that below), such trial-and-error tinkering can lead to enormous results with relatively little downside.

Google started showing optionality almost from the outset, expanding from search to include G-mail, Google Maps, YouTube, Chrome, and the Android operating system. But things have been taken one step further. The company's new structure alllows it to take lots of small bets, which is at the heart of optionality.

Almost all of those bets are coming out of a semi-top-secret program called Google[x], headed up by co-founder Sergey Brin. Unofficially, this is where the company's "moonshots" are born -- attempts at solving some of humanity's biggest problems with revolutionary products. 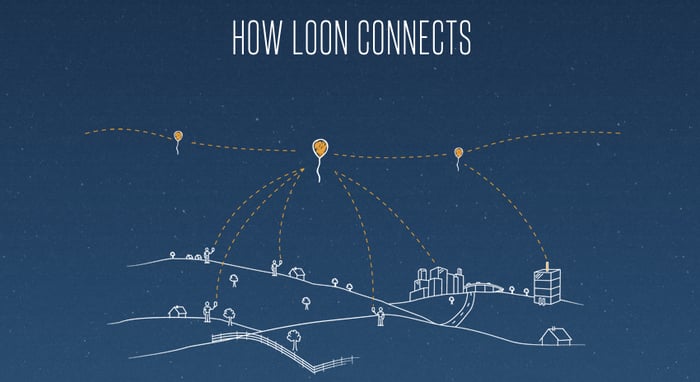 An explanation of Project Loon on Google's web-page. Source: Google/Alphabet

Some of the more prominent products to come out of Google[x] include a self-driving car, Google Glass, and Project Loon -- which aims to bring the Internet to rural and remote areas of the world.

3. A founder-led company with lots of skin in the game
When someone founds a company and sticks with it for decades, the company is more than a provider of income. It is an extension of the founder's existential self. The motivation to build a long-term force for good goes far beyond financial incentives. That's why I love that Larry Page, Alphabet's co-founder, runs the company.

Not only that, but if you want real skin in the game to guarantee that management is in the same boat as you, consider that all Google officers and board members combined collectively own 95% of Google's B Class shares, and 61% of the voting power.

4. A stellar balance sheet
Remember how I said you needed lots of cash in order to take the bets necessary to pursue optionality? Well, Alphabet has that in droves. Over the last twelve months alone, the company has spun out over $14 billion in free cash flow. Currently, the company has over $70 billion in cash and equivalents sitting in the bank, versus just $8.5 billion in long-term debt.

Not only does this type of cash hoard lead to flexibility, but it could also eventually clear the path for Google to declare a dividend, though management has made no serious mention of that coming in the foreseeable future.

5. A great place to work
I firmly believe that when employees are happy and challenged in the work place, they are more likely to produce the kind of greatness that lasts for more than a generation. By using over 4,600 reviews on Glassdoor.com, it's pretty clear that Page and Brin have created a great workplace. 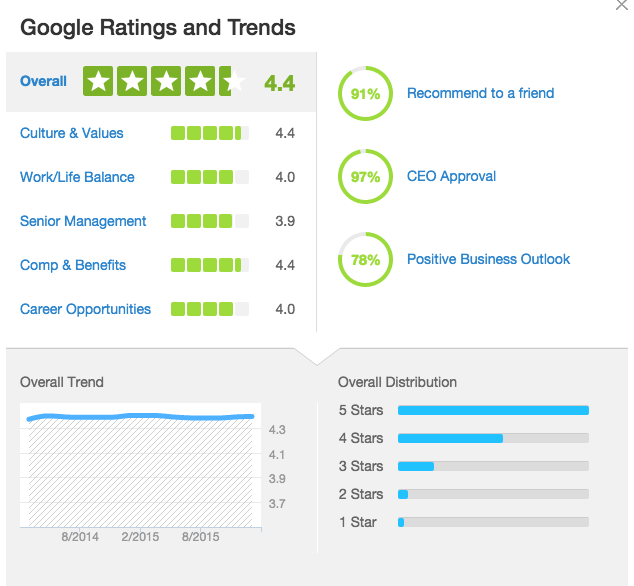 6. A mission that goes beyond money
If you haven't guessed yet, I'm pretty big into companies whose missions not only include the usual "building value for shareholders," but also include something simple yet revolutionary for all of humanity. When employees have such a mission, they can use it to help guide decisions about what opportunities to pursue.

Google's official mission is to "organize the world's information and make it universally accessible and useful." There's no doubting that the company has already succeeded in that mission, and as a shareholder, I'm excited to see where it takes us over the next 20 years.