Here are the company's three biggest factors to watch in the year ahead. 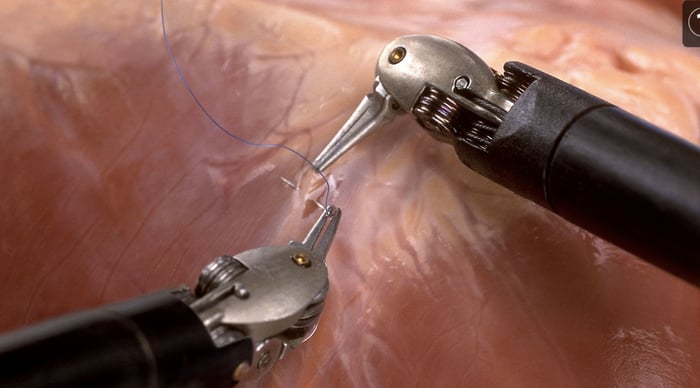 As far as Intuitive Surgical's (ISRG -1.71%) fourth quarter goes, there weren't any surprises from Thursday night's results announcement. That's because the company already pre-released results, and everything that had already been released was simply verified.

The only big piece of retrospective news coming out of Intuitive's headquarters was that the company earned non-GAAP EPS of $5.89 -- 20% higher than the year before, and well ahead of analysts' estimates of $5.04 per share.

But what really matters for long-term investors is that CEO Dr. Gary Guthart systematically laid out Intuitive's three major priorities over the coming year.

"First, we will focus on the expanded use of da Vinci in general and thoracic surgery, particularly colorectal surgery and hernia repair."
Intuitive's bread and butter in the United States has long been urological and gynecological procedures. But growth in both areas is likely to slow significantly in the coming year.

In fact, though urological procedures have shown solid growth over the past two years, management now believes this growth will slow to match the general pace of urological procedures nationwide. And on the gynecological front, operations are actually expected to shrink, as more and more benign hysterectomies are steered away from operation.

Intuitive will be turning its attention elsewhere -- both for the good of Intuitive and its shareholders, as well as for hospitals and their patients. The company has long talked about the potential in hernia repairs for future procedures. In 2015 alone, "General Surgery" showed a 31% jump in operations, largely due to growth in hernia procedures.

A study out of the South Carolina School of Medicine recently found that using daVinci for hernia operations showed a "reduction in blood loss, shorter length of hospital stay, fewer surgical site infections, and no difference in operative times or direct costs."

Those last three aspects are critically important. While daVinci also showed improvements in blood loss and hospital stays for benign hysterectomies, its cost-effectiveness and reduction of complications were later put into question. By costing the same as the Rives-Stoppa technique open procedures, and reducing infections, these hernia repairs may have more staying power over time.

In 2016, investors should continue to pay close attention to growth in general surgery.

"Second, we will work to advance our ecosystem, including expanding our Xi line and taking our Sp product line into initial clinical use."
Intuitive actually announced an FDA clearance showing this priority is already front and center. The company said approval had been granted for a moving operating table developed with Hill-Rom.

Hill-Rom will sell the tables, and Intuitive will get revenue from a software update needed to integrate the table with the daVinci. More importantly, the moving table is expected to lead to further functionality for surgeons.

Guthart also talked extensively about improving the imaging capabilities of the Xi robots. That is one of his top priorities moving forward.

The company will be increasing operating expenses between 9% and 13% in 2016, and much of that expense will be for research and development to further improve both the Xi ecosystem and to commercialize Intuitive's single port (Sp) instruments.

"Third, we will drive our organizational capabilities in markets in Europe and Asia."
With the passing of every year, it becomes increasingly clear that Intuitive's future growth will come in two forms -- expansion of procedures, and expansion of geography. The other part of that 9% to 13% increase in operating expenses will come from increasing the international sales force.

During the most recent quarter, Intuitive sold 13 daVinci systems to China, 11 in Japan, eight to Italy, and seven in Brazil. The company is hoping to get approval from Japanese authorities this year that will allow the daVinci to be used for nephrectomies (kidney). But management also cautions that growth in China could slow if the government doesn't allow for more systems to be placed within the Middle Kingdom.

Brian Stoffel owns shares of Intuitive Surgical. The Motley Fool owns shares of and recommends Intuitive Surgical. Try any of our Foolish newsletter services free for 30 days. We Fools may not all hold the same opinions, but we all believe that considering a diverse range of insights makes us better investors. The Motley Fool has a disclosure policy.