What: Shares of ResMed Inc (NYSE:RMD), a developer of treatments for sleep-disorder breathing, rose by more than 10% as of 11:10 a.m. EST after the company reported its fiscal second quarter results.

So what: Total revenue for the quarter increased by 7% over the year ago period to $454.5 million and the company produced a net income of $0.69 per share, after adjusting for one-time items. Both of those figures came in higher than investors were expecting. Revenue would have increased by an even stronger 13% if currencies had remained constant.

ResMed had a particularly good quarter in the Americas where revenue increased by 17%. The company's EMEA and APAC geographies didn't fair as well as revenue from those two regions declined 4%, but that figure is misleading as currencies were the sole cause of the decline. After adjusting for currency movements revenue in the two regions actually rose by 7%.

The company used its financial strength to return capital to shareholders as it repurchased 700,000 shares during the period, and it also paid out a dividend of $0.30 per share.

The better than expected results cause investors to cheer, sending shares sharply higher.

Now what: While this report gave investors plenty of reasons to celebrate, it wasn't perfect. One metric that came up a bit short was the company's gross margin of 58.1%, which actually declined year over year. Management blamed the shortfall on lower average selling prices for its products combined with a less than ideal product and geography mix. Investors should keep an eye on this figure in future quarters to determine if ResMed is being forced to lower its prices to remain competitive.

Regardless of my nitpicking, it's good to see ResMed stock getting some love from the markets today, as its stock has lagged behind the performance of the iShares US Medical Device ETF (NYSEMKT:IHI) over the past five years. 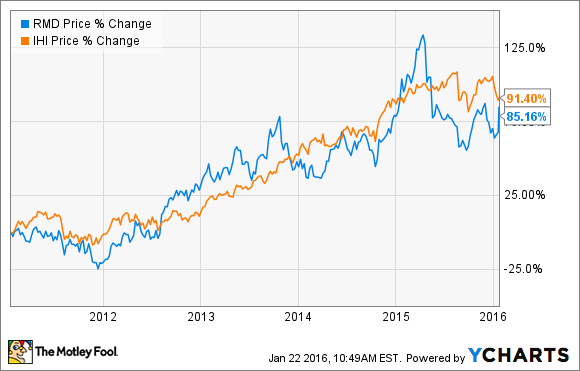 I think the IHI is a good yardstick to measure ResMed's performance against as this ETF holds a diverse collection of other medical devices stocks, which as a group have done quite well. That's not to say that ResMed hasn't performed well over that time period -- it most certainly has -- it just hasn't performed well enough to keep pace with its peer group.

If ResMed can continue to grow at strong rates, buy back shares, and manage to hold its gross margins steady, then I could easily see its stock outperforming the IHI over the coming five years.