There are a lot of issues weighing on the stock right now.

So far, ConocoPhillips' (COP 2.01%) stock is off to an awful start in 2016, down nearly 20% in just a couple of weeks. That's almost as bad as its entire total return in 2015, when the company lost 28% of its value. In fact, given how quickly the stock has fallen this year, it could endure its worst year yet, which would happen if the stock falls by more than the 38.5% it lost during the bowels of the financial crisis.

Here's what could lead the company to deliver such a disappointing performance in 2016.

The funding gap is growing
When ConocoPhillips put out its 2016 capex plan in early December, the price of oil was around $40 a barrel. Since that time, it has fallen more than 20% and is showing no signs of bottoming: 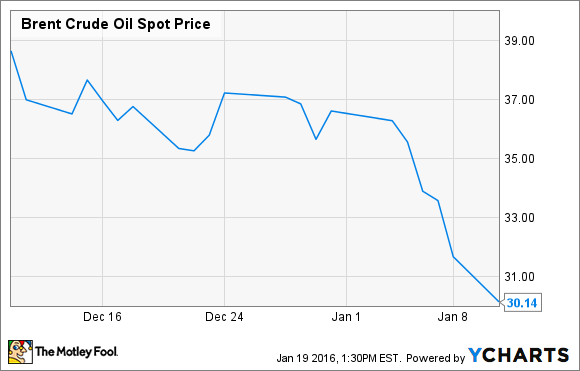 That's a potential problem for the company because even though its 2016 capex plan is 25% less than what it spent last year, and 55% less than its 2014 spending, it's still more than the company's projected cash flow. To bridge that gap, ConocoPhillips is expected to use asset sales and debt.

However, both funding sources could prove to be a problem. First, while the company had signed definitive agreements for $1.7 billion in asset sales in early December, it's possible these transactions could fall through given the renewed weakness in the oil price. That's because banks are becoming increasingly nervous about financing any assets that are exposed to commodity prices.

Further, credit concerns in general have been magnified in recent months, which is why the company's credit rating agency put it on review for a potential ratings downgrade. Such a downgrade would make it more expensive for the company to borrow money to fund its growing funding gap. If its credit rating is downgraded by more than one notch, it could really put a lot of pressure on the stock price.

The top priority could be changing
ConocoPhillips' management team has said on a number of occasions that its dividend is the company's top priority. That said, with the price of oil continuing to slide, it's possible the company's priority will shift from maintaining the dividend to maintaining a strong balance sheet. The company's goal has been to use its balance sheet to bridge the gap between capex and cash flow until 2017, which is when it expected to be cash-flow neutral. That's largely because it had a number of major projects to fund, and once those projects were complete, it would not only need less capital, but it would be producing more cash flow.

However, the continued collapse of oil prices will make it a lot harder for the company to be cash flow break-even next year, given that it had expected to need $60 oil to reach that level. While that number continues to come down as the company captures cost deflation, it has a long way to go before it can be cash flow neutral at a sub-$30 oil price, given its large fixed dividend outlay. Because of that, the company might have to reduce or suspend the dividend, especially if it sees the need to protect its Single-A credit rating.

Cutting the dividend is something a growing number of its peers have chosen to do, with Marathon Oil (MRO 0.60%) recently reducing its quarterly dividend from $0.21 per share to just $0.05 per share. Marathon Oil made this decision in order to free up more than $425 million in free cash flow over the next year. That said, Marathon Oil did have a greater level of debt on a percentage basis than ConocoPhillips, which made it a lot tougher for the company to maintain a strong balance sheet and its dividend.

Investor takeaway
Thanks to the continued oil price crash, ConocoPhillips is on pace to have its worst year yet. It's quite possible it will achieve that undesirable fete, especially if its credit rating suffers a huge downgrade and it reduces or suspends its dividend. Having said all of that, a little help from the price of oil could make all these fears go away.