For a long time, MetLife (NYSE:MET) was a relatively quiet stock in terms of dividends, making payments only on an annual basis. Yet over the past couple of years, MetLife has aggressively boosted its payouts, and its yield of 3.5% far outpaces that of industry peer American International Group (NYSE:AIG) and other major players in insurance. Going forward, though, it looks like MetLife is aiming to follow an even more transformative strategy by separating off its U.S. retail business from the remainder of its insurance operations. For dividend investors, that could result in even better payouts ahead. Let's look more closely at MetLife to see whether investors should expect a dividend increase in 2016.

How MetLife got to where it is now
MetLife's dividend history is one of upward movement that generally came in fits and spurts. From 2000 to 2003, the insurance company only managed to raise its dividend by 15%, yet in 2004, it doubled its payout. Similarly, from 2007 to 2013, it didn't make a single move on its dividend as it sought to recover from the financial crisis.

Yet in 2013, MetLife decided that it needed to make an effort to match up more with the rest of the financial community. It switched to quarterly dividends, and boosted the amount by nearly 50%. The following year, MetLife added another 27% hike, and last year's more modest 7% increase still left it with a payout that surpassed not only AIG but also most key players in the retail and commercial insurance industry. 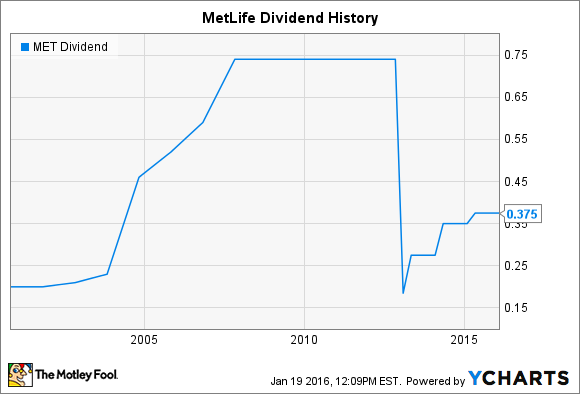 MET Dividend data by YCharts. Note:Chart misrepresents the impact of switching from an annual payout to a quarterly dividend in 2013.

Fundamentally, MetLife has enjoyed many favorable factors. In 2010, the company bought American Life Insurance Co. from American International Group, helping AIG lean down its business even as MetLife expanded its international reach in key markets like Latin America, Europe, and the Asia-Pacific region. More recently, favorable years from a claim-loss standpoint have shored up MetLife's finances, and that has helped the company implement stock buybacks in addition to rewarding its shareholders with dividends.

Yet some investors weren't satisfied with the stock's performance, and that's a big part of the reasoning behind MetLife's proposed breakup. Under the plan, the company would separate from a large portion of its domestic retail business, with the potential for a spinoff, initial public offering, or outright sale to a third party. The remainder of its business, which includes not only its international business but also its domestic group-employer benefits division and its corporate-benefit funding segment, would remain with MetLife, leaving the company as a leader in employee benefits and pension and retirement products.

Can MetLife afford a dividend increase?
If the breakup goes through, then MetLife expects that one consequence will be a reduced need to maintain certain capital requirements, making the insurer more nimble and competitive with other players in the business. Shareholders could end up getting a piece of the freed-up capital, although MetLife's announcement doesn't explicitly say how it would use any newly available cash. If the retail business, which would include parts of MetLife's life insurance and variable annuity units, is able to compete more effectively, then it could generate more profit and be in an even better position to boost its payouts going forward.

Until more details of the MetLife breakup become available, investors shouldn't count on a 2016 dividend increase from the insurance company. However, at least currently, MetLife has plenty of earnings to finance a dividend increase even before a spinoff or sale occurs. Once the transaction takes shape, it's entirely reasonable to expect at least modest dividend growth for MetLife in 2016 and beyond.