Please ensure Javascript is enabled for purposes of website accessibility
Log In Help Join The Motley Fool
Free Article Join Over 1 Million Premium Members And Get More In-Depth Stock Guidance and Research
By Beth McKenna - Jan 23, 2016 at 7:17AM

Here's one bearish thesis for the packaged foods, coffee, and pet food retailer.

The start of a new year is an opportune time to examine the investment potential of J.M. Smucker Co. (SJM 1.34%), the maker of Folgers and Dunkin Donuts coffee, Smucker's jams, and Jif peanut butter. Smucker's stock has returned 17.3% over the past year, including dividends, beating the S&P 500's 5.6% loss. Moreover, it's been a long-term winner, returning 279% over the past decade compared to the broader market's 83% return.

In this article, we look at three reasons why Smucker's stock price could fall. This isn't a declaration that any of these things will happen or that the stock price will indeed drop. We're just examining the merits of a bear argument thesis, as all investors should occasionally do with their stock holdings.

Big Heart is a considerable player in the $21 billion U.S. pet food business, making such staples as Milk-Bone, Kibbles 'n Bits, and Meow Mix. It had annual sales of $2.2 billion at the time of the acquisition, and accounted for about 28% of Smucker's total revenue in the fiscal second quarter of 2015, for the period ending in October -- making it approximately the same size as the company's coffee segment.

Given this acquisition's massive size and the $2.6 billion debt load that Smucker assumed -- which ballooned its total debt at the time to about $6.5 billion -- Smucker needs this acquisition to do well or it will have problems. Moreover, Smucker's core business doesn't have pricing power, meaning that even more is riding on Big Heart. Smucker's stock price would almost surely fall if Big Heart doesn't perform well.

How likely is this scenario? Not very, in my opinion. Big Heart makes some of the top pet food and snack brands, which seem to give it a degree of pricing power. Most people would probably cut back on many things before they denied precious Rover his favorite chow. Moreover, Big Heart is in the right market: Smucker CEO Richard Smucker was quoted by The New York Times as saying, "Pet food is one of the fastest-growing areas in the center of the [grocery] store." Additionally, Smucker's management has proven time and again that it has a good eye for acquisitions and incorporates them well into its business.

2. Growth in its core business could continue to fall off
Prior to the Big Heart acquisition, Smucker's revenue had been nearly flat since 2012. In fiscal-year 2015, ended in April, Smucker's revenue fell 3.3% from the previous year, excluding the contribution from Big Heart. Earnings per share declined 4.1%, excluding Big Heart's impact.

While things turned around in the latest quarter, thanks to gains in coffee volume, the bottom line is that Smucker has weak pricing power in its human food and coffee businesses. This makes it dependent on Big Heart and future acquisitions for long-term growth. Smucker's stock should be OK in the near-term if growth in its core business continues to slowly fall off because Big Heart should pick up the slack. But a steep decline in its core business could result in the stock price falling. This scenario isn't likely, in my opinion, unless green coffee bean prices soar (covered next).

3. Coffee bean prices could rise or even soar 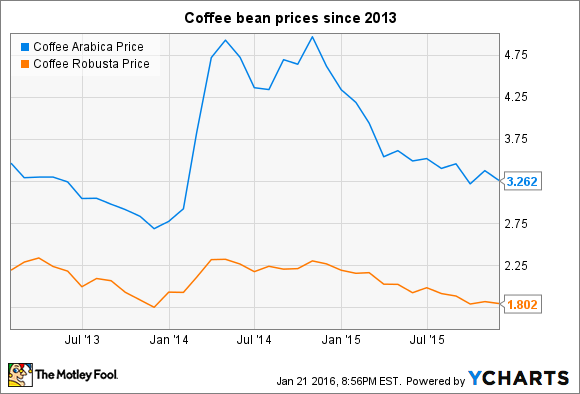 Smucker's coffee segment accounted for about 28% of its total sales in its most recently reported quarter. So, like Big Heart, the coffee segment has a huge impact on how well Smucker's overall business performs.

How well the coffee segment performs is affected by green coffee bean prices. Smucker has to either "eat" any commodity price increases, which negatively affect its earnings, or try to pass them along to customers in the form of higher retail prices. The latter hasn't worked in the past. When Smucker raised prices by an average of 9% across its packaged coffee brands in 2014 to partially offset the higher prices it was paying for coffee beans due to the Brazilian drought, it lost sales. Some customers started buying less expensive brands.

Currently, Smucker is benefiting from the drop in coffee bean prices that occurred throughout 2015. In fact, in July, the company lowered the retail prices of its packaged coffee to try to win back some of the customers it lost when it hiked prices the previous year. Coffee bean prices could, however, rise -- even skyrocket -- in 2016. This would negatively impact Smucker's financial results and its stock price. How likely is this scenario? This is impossible to predict, as commodity prices are heavily dependent upon unpredictable factors, primarily weather. Positively, Smucker will be considerably less affected by coffee bean prices now because the Big Heart acquisition made the coffee segment a smaller portion of its total business.

Beth McKenna has no position in any stocks mentioned. The Motley Fool has no position in any of the stocks mentioned. Try any of our Foolish newsletter services free for 30 days. We Fools may not all hold the same opinions, but we all believe that considering a diverse range of insights makes us better investors. The Motley Fool has a disclosure policy.