At over 1.5 billion users, will Facebook's user growth begin to hit a ceiling this year? Here's a close look at what's driving the company's growth.

Last year was an excellent year for Facebook (META 2.52%) all around, reflected in the stock's 26% rise in the past 12 months. The company's digital ads continued to attract ad dollars and users remained as engaged as ever on the platform. But in one area, in particular, company exceeded particularly well: user growth. Can the social network keep up its impressive user growth in 2016?

User growth is an investor's best friend when analyzing a social-media company. A growing user base suggests the platform is doing something well enough to attract a growing number of users. It attests to a platform's relevance with its audience. On the other hand, stagnating user growth suggests either a platform failing to boost value for users or it's hitting the limit of its relevant audience. In other words, user growth provides a glimpse of the underlying health of a social network.

Just how robust was Facebook's user growth in 2015? While we won't have data on the company's full-year user growth until the company reports its fourth-quarter results on Wednesday, Facebook's third-quarter monthly active user (MAU) growth highlights the company's strong growth. In Q3, Facebook had about 1.5 billion MAUs, up 14% from the year-ago quarter -- incredible growth for a social platform of this size.

Notably, Facebook's growth rate in MAUs in 2015 exceeded Twitter's (TWTR 1.85%), even though Facebook's user base is more than four times the size of Twitter's. In Q3, for instance, Twitter's MAUs increased by just 11% from the year-ago quarter.

Another way to look at Facebook's user growth is by observing its sequential growth. 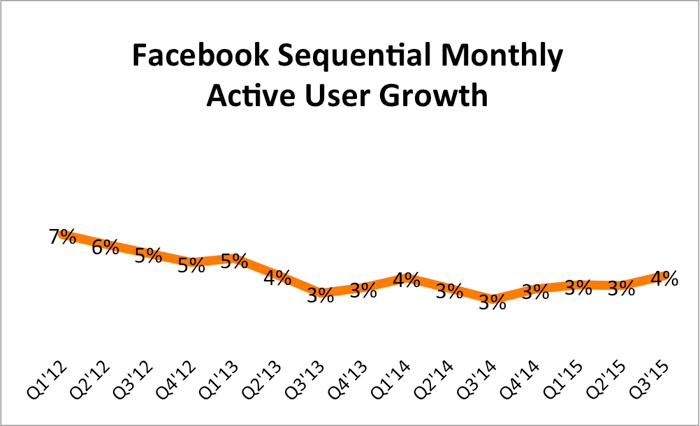 In another contrasting comparison, Twitter's sequential growth highlights the company's disheartening trend of deceleration. Of course, this is one of the primary reasons Twitter stock has plummeted during the past 12 months by a whopping 56% at the time of this writing. 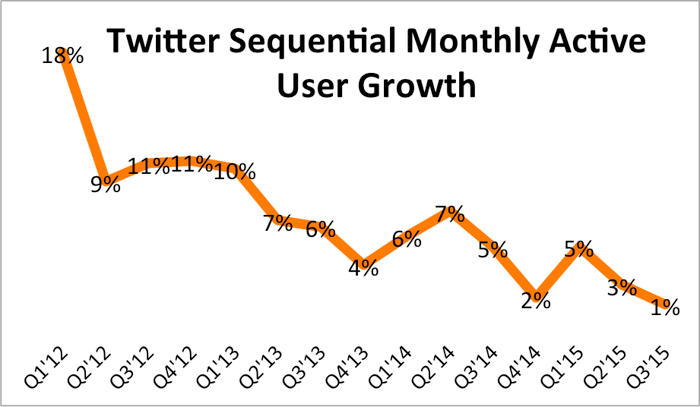 A look at this data highlights why Facebook has been able to post such significant growth in MAUs: Its geographic segment with the biggest user base, Asia-Pacific, is also its fastest-growing user base.

Considering both the size and the high rate of growth currently in Facebook's Asia-Pacific segment, chances are the social network's user growth will continue upward in 2016 at similar rates as in 2015. Of course, Facebook can't grow its user base at the same rate forever. But there isn't a reason to expect a slowdown yet.

Investors will get an update on the company's user growth on Wednesday, when Facebook reports fourth-quarter results. Look for the social network to maintain sequential growth in users of about 3% or more.