Honeywell International, General Electric Company, and United Technologies have served notice that their aerospace earnings will face near-term headwinds -- but what about the long term?

Given an avoidance of a major slowdown in the global economy, the aviation industry looks set for another good year. The commercial jet order book stands at nine years' worth of last year's delivery rates, and aluminium supplier Alcoa just forecast 8% to 9% global sales growth for the industry. Meanwhile, a leading industry body, the International Air Transport Association (IATA), recently predicted 10% net profit growth for the worldwide airline industry in 2016. However, many leading aerospace companies are giving modest outlooks for 2016. Why is this so, and could there be hidden upside in the sector?

All of these factors are likely to act as headwinds in 2016, and anyone looking superficially at these companies' aerospace earnings outlooks could easily make a negative conclusion.

That would be a mistake, because throughout 2016 each company will be building a base for long-term recurring revenue and cash-flow streams.

A brief summary of each company's outlook shows the impact of headwinds in 2016.

Here is United Technologies CFO Akhil Johri speaking on the issue, and about Aerospace Systems, on an earnings call:

"The negative engine margins story at Pratt is well known at this point. We have also talked about the mix impact at Aerospace Systems as production decreases on higher margin fully learned-out current platforms and increases on new platforms where the margins on early units are pressured by the learning curve."

By "negative engine margins" he simply means the losses taken from the costs of growing production on a new aerospace engine. As you can see in the following diagram, the company expects engine unit costs to fall dramatically in future years. In addition, Pratt & Whitney has 80% fleet management coverage on its geared turbofan orders -- implying a large amount of recurring aftermarket revenue in the future. 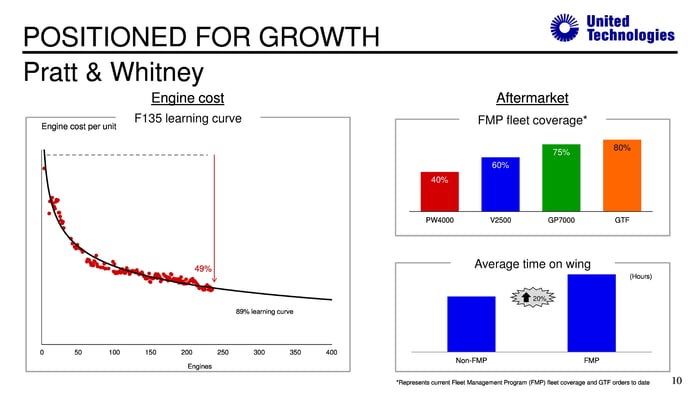 Similarly, General Electric plans to cut the unit cost of the LEAP engine as production ramps up, but it will clearly hold back margin growth in the near term. Here is CEO Jeffrey Immelt during the 2016 outlook meeting: "We think this is a business that even with the Leap is going to be able to grow gross margins and grow margins for the year, so that's aviation."

New aircraft, new platforms
Pratt & Whitney ($15 billion in 2015 sales) and Aerospace Systems ($14 billion) generate around half of United Technologies' revenue. However, Aerospace Systems also faces headwinds in 2016. As you can see in the table above, management expects volume/mix issues to reduce segment operating profit by $300 million to $325 million. Essentially, the company is moving production to newer, lower-margin aftermarket products -- older products tend to carry higher margin, and the transition is set to damage profitability and volume.

In addition, commercial aftermarket sales are only expected to be up by the low single digits -- newer aircraft tend to generate less aftermarket revenue. However, aircraft will mature in time, and margins on aftermarket parts are likely to increase as the company cuts unit production costs in producing more of the newer products.

It's a similar story at Honeywell International, where commercial aftermarket sales are only expected to grow in the low single digits. Moreover, Honeywell's expected commercial OEM mid-single-digit sales decline would actually be a low-single-digit increase without the OEM incentives given to get Honeywell on new aircraft platforms -- an act crucial to growing long-term recurring revenue.

The takeaway
All told, a deeper look at the dynamics in the commercial aerospace industry reveals a "short-term bad, long-term good" scenario for 2016. In truth, all three are building a base for strong long-term growth, but it won't show up in their earnings just yet.The headline numbers don't look great, but great investors don't buy on headlines.