What happened?
Black boxes? Not us! New Mountain Finance Corporation (NASDAQ:NMFC) and TCP Capital (NASDAQ:TCPC) went out of their way to pre-announce fourth-quarter estimates ahead of their full reports, which are slated for February.

BDC stocks kicked off the year plunging about 9.6% to start 2016, as measured by a popular industry ETF.That apparently sparked concerns that the "good guys" would get thrown in with the "bad," and some companies are hoping to reassure the market by preemptively announcing key earnings results.

Does it matter?
It matters if you think earnings reports matter, which they certainly do.

New Mountain Finance expects to post adjusted net investment income of $0.34 to $0.35 per share for the fourth quarter of 2015, in line with its current quarterly dividend of $0.34 per share.

Importantly, it doesn't expect to report any new underperforming assets (non-accruals), noting that its preliminary reporting suggests its credit quality is "stable." New Mountain Finance estimates book value of $12.90 to $13.15 per share as of Dec. 31. That's a drop of about 5.1% from book value of $13.73 per share last quarter, probably from mark-to-market losses on its investment portfolio.

The company added that it was in the market repurchasing its shares from Oct. 1 to Jan. 20 at prices below its book value per share, which certainly helped buffer its book value performance during the fourth quarter. How much of a role buybacks played is impossible to know -- it didn't quantify its fourth-quarter repurchases in its announcement. 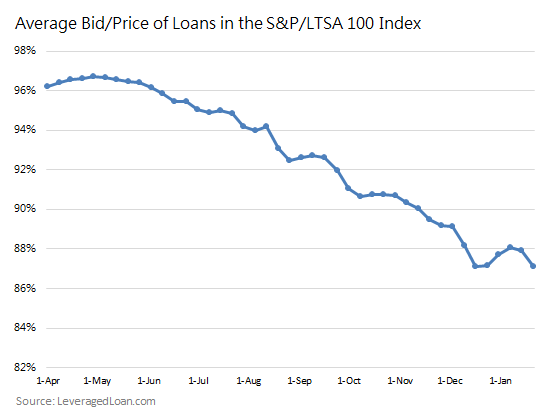 Early results aren't all that surprising.

Leveraged loan prices have dropped precipitously over the last year. The S&P/LTSA Index, though imperfect, serves as a good proxy for understanding whether BDCs will report higher or lower book values in any given quarter.