The price of jet fuel has reached a critical level that bodes well for FedEx's future earnings.

Express delivery pioneer FedEx (FDX 3.33%) has benefited from the massive drop in oil prices over the past year and a half -- but not as much as the airlines. However, if oil prices remain at today's extremely low level for any length of time, FedEx could finally reap a big windfall. Here's why.

FedEx passes its jet fuel costs through to customers.

For example, the January FedEx Express fuel surcharge is based on the average price of jet fuel in November. By contrast, the jet fuel price FedEx actually pays has a much shorter lag relative to the market price: as little as a week.

These surcharge lags can occasionally have a significant impact on FedEx's earnings. In Q3 of fiscal 2015, FedEx benefited from a big drop in jet fuel prices during the early part of the quarter. The FedEx Express segment's operating income more than doubled year over year in that quarter. Some of that was due to cost-saving initiatives, but a lot of this profit growth came from the fuel surcharge lag.

However, usually, the impact is much smaller. Furthermore, when prices go back up, the fuel surcharge lag becomes a drag on FedEx's profit, so there's no long-term earnings impact.

This time could be even better
In this year's fiscal third quarter -- which runs from December to February -- FedEx is on pace to get another big fuel surcharge benefit. Last month, the price of Gulf Coast jet fuel averaged $1.08/gallon -- but in October, the month used to set the December surcharge, jet fuel averaged $1.39/gallon. The fuel surcharge benefit is on pace to be even larger in January. 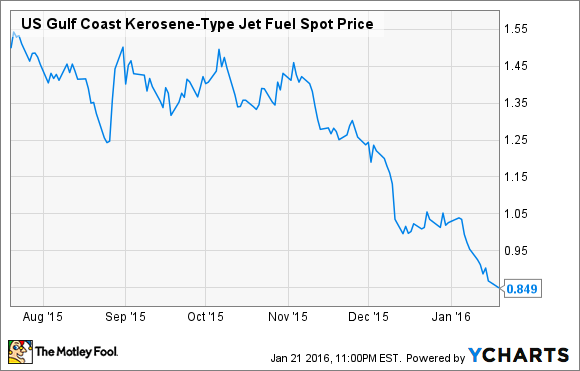 However, the real game changer is that jet fuel prices have recently fallen below the threshold for any fuel surcharge at FedEx Express. The current fuel surcharge table calls for a 0.25% surcharge when jet fuel costs $0.99/gallon to $1.03/gallon, and an additional 0.25% for every $0.04/gallon increase in the (lagged) jet fuel spot price.

On Tuesday, the price of jet fuel reached a new low of $0.85/gallon. Normally, FedEx sees a 25 basis point fuel surcharge decline for every $0.04/gallon drop in jet fuel costs. The lower revenue balances out the cost savings. But below $0.99/gallon, there are no more revenue reductions -- the fuel surcharge can't go below zero! Any further fuel cost drops are pure profit for FedEx.

In other words, if fuel costs remain near today's level, FedEx won't just get a temporary profit boost from the lag effect, it will get an ongoing cost benefit with no offsetting revenue impact. FedEx consumes more than 275 million gallons of jet fuel per quarter, so even savings of $0.10 to $0.15/gallon would add up.

A good buying opportunity
Fortunately for investors interested in FedEx, the stock has fallen more than 30% since hitting an all-time high in mid-2015. FedEx shares actually look quite cheap; they trade for less than 12 times the company's fiscal 2016 earnings per share guidance.

FedEx is currently out of favor because many investors are worried about the potential impact of slowing economic growth across the world on its results. However, most of these signs were already present a month ago, when FedEx reaffirmed its guidance for full-year EPS growth of 16% to 22%. And fuel prices have marched relentlessly downward since then.

In the past few years, FedEx has shown an ability to react swiftly to match its capacity with demand. This suggests a modest economic slowdown wouldn't derail its profit growth. In fact, if oil prices remain depressed, FedEx's profit margin could move even higher.

Adam Levine-Weinberg has no position in any stocks mentioned. The Motley Fool recommends FedEx. Try any of our Foolish newsletter services free for 30 days. We Fools may not all hold the same opinions, but we all believe that considering a diverse range of insights makes us better investors. The Motley Fool has a disclosure policy.