While global agriculture is troubled, American farms are in crisis. Low prices and excessive inventory damage farmers everywhere, but in the U.S. a strong dollar has curtailed exports and attracted imports, so inventories have ballooned. Farm income has dropped precipitously, and balance sheets are deteriorating.

Naturally, farm suppliers are affected. Equipment makers such as Deere are obvious victims: Such purchases can usually be postponed. Suppliers of consumables are less sensitive to the farming cycle because their products are less discretionary, but times are so tough that farmers are reducing acreage planted, fertilizing, and applying pesticides as much as they can. So producers of consumables aren't escaping, either, as Monsanto (NYSE:MON) revealed with its Jan. 6 report on fiscal Q1 (ended Nov. 30). Although results exceeded Monsanto's dismal guidance, they were greeted without enthusiasm: The stock dropped 2.1%, while the S&P 500 index was down 1.3%. 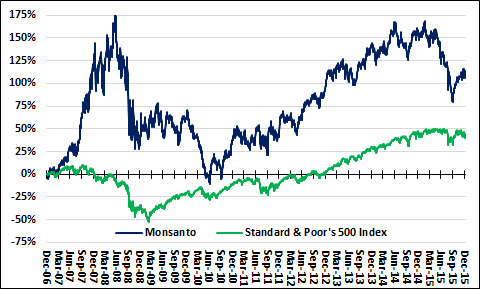 Monsanto's superior performance ended in February 2015, when the Federal Agricultural Mortgage Corp. released an alarming forecast of U.S. farm income. As it turns out, it was optimistic, but it also wasn't the main reason for Monsanto's subsequent price decline -- note that Deere's equity, which is more vulnerable to agricultural recession, didn't respond similarly. Rather, Monsanto's maladroit pursuit of Syngenta (NYSE: SYT) is to blame. Investors interpreted Monsanto's doggedness as a sign of weakness, an impression only bolstered by its defensive press release announcing its abandonment of the chase: "Monsanto Reaffirms Opportunity in Standalone Growth Plan." This perception was further reinforced by the announcement of the merger between Dow Chemical and DuPont. Monsanto's shares dropped 2.5% on the day that plan was revealed, while the S&P 500 index was down 1.9%.

So Monsanto, although still a world leader in seeds and pesticides, finds its strategy being questioned. Coming during an agricultural recession, when no strategy is likely to receive validation, this is even more than usually unwelcome. Renewed flirtation with Syngenta is unlikely to help, unless it finally results in a transaction. And cost-cutting, although welcome, will incur $1.2 billion in up-front charges before making any contribution to earnings -- any benefits are unlikely to be seen until fiscal 2017. The fiscal year to Aug. 31, 2016, is likely to be grim, and despite analysts' expectations, the year to August 2017 may show little more than the fruits of fiscal 2016's restructuring.

However, there are aspects of Monsanto's strategy for which the markets don't seem to be giving it much credit. In particular, currency effects have masked its success with a new strain of soybeans designed for Southern Hemisphere markets: 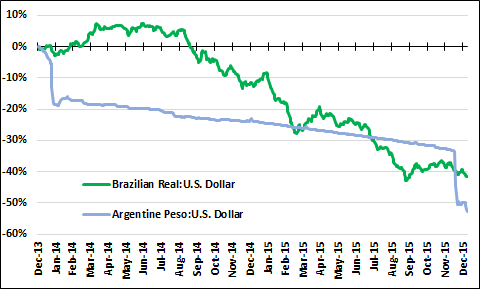 These -- Argentina in particular, thanks to the recent change of government -- will be some of the brighter spots in world agriculture over the next few years. Unfortunate currency timing shouldn't be used as a stick with which to beat Monsanto: Waiting until Latin American currencies weren't vulnerable would have meant never launching at all. Apart from the attractions of strengthening its position in important farming regions, the rollout reduces Monsanto's dependence on American agriculture, which is likely to be weak for years to come. 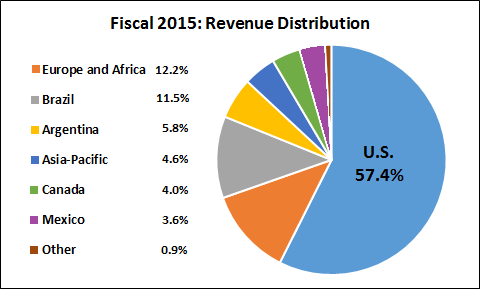 Monsanto's product pipeline is also impressive. It's expanding into insecticides and disease control, areas where it previously had little presence, and guaranteeing its dominance over its core corn, soybean, and cotton markets. Expansion into tomatoes is also promising, while cucumbers will probably be a sideline at best. The development of data-intensive "integrated farming" in conjunction with Deere, although it will initially be directed primarily toward U.S. farmers, will, in the long run, be the future of major crop farming. None of these initiatives will pay off immediately. But they and Monsanto's cost reduction efforts will gradually build value. At 14.8 times consensus estimates for the year to Aug. 31, 2017, and a yield of 2.3%, which is remarkable for a company that is, in the long run, a growth stock, patient investors should probably take a look.